“31 Nights Of Terror” Tales Of Poe 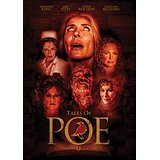 What 31 Nights of Terror list would be complete without an addition from the master of macabre himself, Edgar Allen Poe, this time in the form of an anthology series that transforms three of his dark tales into a visual experience that will haunt you. Tales of Poe treats the audience to a front-row seat for the stories of The Tell-Tale Heart, The Cask of Amontillado, and Dreams. Fair warning, these are not direct interpretations. There is some artistic license taken, but that doesn’t have to be a bad thing. Who wants to just watch imitation when you can watch recreation, and that is exactly what Tales of Poe offers.  I hope you have a strong stomach. Who am I kidding, if you are reading this, you must, because Tales of Poe pulls no punches in its tribute to the master. As I mentioned, there are a few artistic changes such as some gender changes to specific characters, but the essence of each of the stories remains the same. (Yes, I skimmed the featured stories in order to double check that they did the source material justice.)

The best way to approach this type of review is to break down each story individually and in the order of my favorite to least favorite, which also happens to be the order in which the stories unfold.

The Tell-Tale Heart as well as being the most notable of the three chosen anthologies also pushes the boundaries of sanity, playing out in the backdrop of a mental asylum. Debbie Rochon is pleasantly disturbing as she insists upon her sanity even while she resigns herself to committing a murder. Another obvious change is that it has been modernized to be more relatable to a changed populace that may not be as familiar with the works of the original writer; however, there are references to the original that I would challenge you identify. Though I am a fan of the source material, I found myself quite fond of this reinterpretation that managed to probe the fear senses of my brain.

The Cask of Amontillado differs from The Tell-Tale Heart in regard to tempo, opting for more Gothic tones. I didn’t find it as intimidating as the first anthology (probably because I watched AHS Asylum not too long ago), but it was still worth watching purely on the merits of its macabre nature and to watch how the story unfolds, this story unfolding on a grander scale with the backdrop of festivities and drinking. It provides a somewhat immersive vibe, but it does take away from some of the horror elements.

Finally is Dreams, the most obscure of the three, at least when it comes to my recollection. Surreal is the first word that comes to mind in regards to this short, which features a young woman teetering between life and death from a hospital bed. Of the three, this short takes the most changes courtesy of the backdrops and music selection. It is reminds of an artistic film, but still manages to send a chill down my spine.

As a whole, I think these three shorts do a great job of living up to the memory of Edgar Allen Poe, specifically because they do not follow his work to the letter. That was what resonated with me the most. If I wanted to see his exact work I would watch his biography, but because the filmmakers were willing to take chances with provided material, it made for a more engaging and terrifying experience. My girlfriend wouldn’t even watch it with me. That is the number one mark of a horror movie: when people take one look at it and refuse to watch it. That and nightmares, which also happened.

Jeremy Butler is a film school graduate of the International Academy of Design and Technology. He is been writing for Upcomingdiscs since 2012; however, movies have played a big part of his life for much longer. Favorite genres include horror, science fiction/fantasy, and comedy. Favorite movies are V for Vendetta, Boondocks Saints, Kiss Kiss Bang Bang, and The Godfather.
Inferno “31 Nights Of Terror” The Id (Blu-ray)