Posted in: Disc Reviews by Brent Lorentson on October 30th, 2016 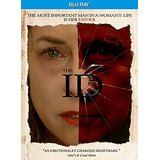 This is one of those titles that came along where I had no idea what to expect.  I knew it was a horror title, and really that is about it.  The problem with doing films in a single location, though it may save you money when it comes to the actual production, is that in return you put an added pressure on your performers and the story to not be boring and keeping the story moving.  It can be done; after all, 10 Cloverfield Lane is one of my favorite films of the year, and most of it takes place in a bunker.  When it comes to The Id, how did the film turn out? Well, I feel it was a victim of its own design.

Meridith (Amanda Wyss) has pretty much spent her entire life at home, and her youth has been spent taking care of her father.  Her father, Mr. Lane (Patrick Peduto) is far from the loving father who appreciates what his daughter has sacrificed to take care of him.  He’s a mean old coot, and very early on in the film we wouldn’t blame Meridith if she snapped and killed him one day.  Well, that’s actually all this film seems to really be about, a woman being brought to her breaking point where she can justify to herself that it’s OK to kill her father.

I’m not trying to say it’s OK, but you at least can understand how her spirit is broken from the constant abuse, and Peduto plays the part so well that you’re relieved for her when he does finally die.  If you’re worried about spoilers, really I’m only discussing the first half of the film, as the second half focuses more on the guilt Meridith wrestles with as well as a nosy neighbor who is coming around to check up on Mr. Lane.

Here is my problem with the film, and it’s a massive one.  The film just doesn’t justify having a feature-length running time.  So many of the key points with Meridith being verbally abused are done over and over to the point they lose their impact.  Then the sequences of her dwelling on her fantasies with a past love interest just get in the way of the core story.  We get it, she’s miserable, and her dad is a piece of crap; there’s no need to beat us over the head with this.

Personally this gets trimmed down to half its length, and I feel this could be a great short film or a story that would fit in with an anthology series.  Fattening this film with unnecessary scenes just takes away from the impact these characters make with the audience.  Both Wyss and Peduto deliver some great performances that range from having us feel pity and rage towards them, but there is just not enough story here to carry it the length of a feature film.

The Id is presented in the aspect ratio 2.35:1.  The 1080p image is arrived at with an AVC MPEG-4 codec at an average of 15 mbps.  The film has a very natural look that leaves the characters with very warm and natural color.  With most of the film inside an apartment, there isn’t much room for the film to visually flourish.  There are no compression issues that I could see, and there is a reasonable amount of detail captured.

The Dolby Digital 5.1 track is a bit lackluster.  I had to turn up my system quite a bit just to hear the audio and background sound properly.  There are some phone conversations where the audio just doesn’t sound properly mixed and is very noticeably something created in post.  The score is a bit somber and just doesn’t seem appropriate for a horror/ thriller, but more so a Hallmark movie of the week.

Behind the Scenes Footage: (8:55) Footage from behind the scenes of them actually in production on the film.

Needs, Wants & Desires BTS of The Id: (25:25) A collection of interviews with the cast and crew discussing how the film came together and how the film got made.  Honestly, I enjoyed this more than the actual film.

Deleted/Alternates Scenes:  Several scenes that were cut from the making of the film.

Audition Clips: Takes of five of the actors auditioning for their roles in the film.

I’d have a hard time suggesting this film to any casual film viewer.  It’s not that it is bad so much as the low production cost would turn off most viewers.  The performances are what carry this film, but a performance can only carry a film so far if the suspense isn’t there.

Brent Lorentson is a horror writer and film critic based out of Tampa, Florida. With a BA in Digital Film, he co-wrote and co-directed Scavenger Hunt. His short stories have appeared in various horror anthologies. In 2019 his short script Fertile Blood will be a part of the anthology horror film Slumber Party. He is currently working on his first novel A Dark and Secret Place set to be released in late 2019. Favorite Films: Taxi Driver, Fight Club, I Saw the Devil, The Wild Bunch, Dawn of the Dead, A Clockwork Orange, Pulp Fiction, Heathers, The Monster Squad, and High Fidelity.
“31 Nights Of Terror” Tales Of Poe “31 Nights Of Terror” Decorations Contest Winner