Posted in: Disc Reviews by Gino Sassani on November 4th, 2016 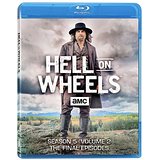 “This train don’t stop.” That’s what we’re told in an Elton John ballad. But it doesn’t matter if it’s that Midnight Train to Georgia or a freight train, you can bet the farm that it’s going to run out of track.  That’s for sure, and you can expect more than a little crying over it all. The saddest news, however, is the show’s final year. You really should not even think about joining the series from this point. I suspect it will still be quite entertaining, but for the full experience you do have to start from the beginning. The evolution of the Cullen character from Civil War veteran out for vengeance to the man who we see in the fifth season is a rather nice journey to witness. So saddle up for the first four. You can find the reviews for other seasons here.

We start with the second part of the final season. These are basically the last seven episodes of the show’s run. It’s a rather interesting place to start. I’d say this is the episode where things begin to be resolved. Cullen must race to protect his family from The Swede, who has been defeated and will lash out by killing his wife and son. This marks the final confrontation between the two enemies. It won’t go where you think it is going, and it’s a turning point in the Cullen character. We then turn to his final confrontation with Chang (Mann), so that within just a couple of episodes Cullen’s enemies are no longer a problem.

It’s back to the railroad story and the approaching golden-spike moment. After meeting with Grant (Slezak), it’s a race to claim the coal fields and over $2 million in bonus money. Of course, the show returns to its roots, and that means the schemes of one of the show’s most consistently great characters over its five-year run. I’m talking about Colm Meaney’s Thomas Durant. It’s so good to see him back and up to his old tricks again. If you watched the first part of the final season, you’ll find him absent and not even in the opening credits for most of those episodes. I’m happy to report that he’s back and getting some of what’s coming to him.

In the final episodes some of the supporting cast get resolutions to their stories, and then it turns a little disappointing. I know that the paradigm shift in Cullen is really what the series has been about, but these final moments are spent far too much in quiet reflection. After the hearings on the corruption, the series goes out not with a bang, but an almost unheard whisper. I’m not unhappy with where Cullen ends up, and I think the final scene is a wonderful moment. It just appears that the storytelling dropped. Once Cullen had no one to fight or compete with, it’s almost as if the character lost something that made him…boring. It’s a word I never thought I would use to describe this wonderful character for five years.

The DTS-HD Master Audio 5.1 makes fine use of the surround field. There are plenty of very clear background sounds that bring you closer into this 1865 world. It might be distant horses walking in the mud or the sounds of a bird from the nearby wilderness. When there are large action sequences, we get the in-your-face sounds, yet still retain the subtle nature of the time and place. Dialog is just fine, and the score rarely intrudes. Subs rear their thundering heads from time to time as well. It can all be found in a very dynamic, crystal-clear audio presentation.

Again the final disc offers a handful of very brief features that run an average of 1-3 minutes.

Hell On Wheels disappears from the television landscape. It was always a bit of a sleeper for me. It took me by surprise on day one and held my attention almost until the final moments. The final episode was disappointing only in that perhaps too much of the reflective pause drags out the final outcome. As much as I hate to say it, we might have been better off with one less episode. I get the impression that when it reached its end, they still had a little time to fill. No matter the route, it all hinges on “One word…Done!”

Gino Sassani is a member of the Southeastern Film Critic's Association (SEFCA). He is a film and television critic based in Tampa, Florida. He's also the Senior Editor here at Upcomingdiscs. Gino started reviewing films in the early 1990's as a segment of his local television show Focus. He's an award-winning recording artist for Omega Records. Gino is currently working on his 8th album Merchants & Mercenaries. Gino took over Upcomingdiscs Dec 1, 2008. He works out of a home theater he calls The Reel World. Favorite films: The Godfather, The Godfather Part II, The Body Snatcher (Val Lewton film with Karloff and Lugosi, not the pod people film), Unforgiven, Gladiator, The Lion King, Jaws, Son Of Frankenstein, The Good, The Bad And The Ugly, and Monsters, Inc.
Skiptrace (Blu-ray) Hacksaw Ridge