Return Of The Living Dead 3 (Blu-ray)

Posted in: Disc Reviews by Brent Lorentson on November 29th, 2016 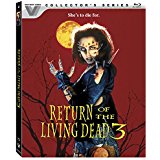 Fresh out of the vaults comes another cult classic. Vestron Video has decided to unleash Return of the Living Dead 3 for horror fans to snatch up this holiday season.  Considering the titles that Vestron has already released, for some this might be a title that will leave fans scratching their heads about there being an urge to re-master this film, much less crank out a Blu-ray with so many features.  Well, the simple answer is that the person in charge of acquiring and releasing these titles knows that there are fanboys like me out there who will shell out the money for a product that’s given this kind of attention.  Return of the Living Dead is a cult classic and is mostly responsible for casual moviegoers making the connection with zombies and brain eating (yes, we real horror fans know better, but I always thought it was cute when an old girlfriend would dress as a zombie for Halloween and shuffle around moaning “brains”).  If I’m being straight with you, I can’t remember the sequel at all, but the third I do remember, and there are some fond memories that still hold up with this title.

When Curt (J Trevor Edmond) picks up his girlfriend Julie (Melinda Clarke), he’s got a surprise for her, only it ends up being the start of the many bad decisions to follow.  He’s decided to steal his dad’s key card and use it to access Top Secret areas on the base his father works at.  His father is Colonel John Reynolds (Kent McCord), and as it would turn out, the Colonel is in charge of a program that uses a unique chemical, Trioxin, to re-animate corpses.  That’s right; the military is at it again trying to create a weapon that will no doubt turn against them.  Curt and Julie slip far enough into the base to get a glimpse at some of the gruesome experiments and reluctantly decide they’ve seen more than they can handle.

Colonel Reynolds comes home to break the bad news to his son that yet again they will have to pack up and move to another town. This is crushing for Curt, considering he’s in love with his wild-child girlfriend, and in the heat of the argument Curt storms out, deciding he and Julie are going to live their own lives together.  This is all short-lived following a freak motorcycle accident that kills Julie.  In a panic Curt remembers what he saw at the base and foolishly decides to attempt to bring his girlfriend back to life.

What’s different from this breed of zombie than what we’re used to seeing on the screens these days is that these zombies can still talk, well, at least for a while.  Seeing Julie attempt to stifle this hunger by binging on snack cakes is amusing, but what I found clever is how she resists her urges is by inflicting pain upon herself.  Here is where it’s impossible to not applaud the makeup effects department as we see the gradual mutilation we see Julie go through.  There are cringe-worthy moments here that most gore-hounds will appreciate.

This was still a young Brian Yuzna (Society) who has a way of taking body horror and pushing it to its limits while also being able to squeeze in a few laughs along the way.  Though this is a film I feel is underappreciated by the horror genre, it is definitely a film that is well crafted and has some great gore effects while keeping the film fairly tongue-in-cheek.  By the time the film makes it to its final arc, I think the film has one of the craziest endings for the zombie genre and left me wishing we could see this kind of craziness on film more often.

Return of the Living Dead 3 is presented in the aspect ratio 1.85:1.  The 1080p image is arrived at with an AVC MPEG-4 codec at an average of 26 mbps.  The film has a very soft look to it, as though some of the color feels faded at times.  The flesh tones seem a bit pale as well.  While the film does look cleaned up without any scratches or much to show its age, there are a few minor compression issues when it comes to the exterior night shots.  Some of the scenes lack detail, but I feel this could be blamed more on the limited budget that Yuzna goes into deeper detail about on the commentary track.  While this isn’t a perfect picture, it still looks superior to what the VHS copy did a few decades ago.

The film is presented in the original 2.0 stereo sound.  Considering this is the original source track for the film, there are some compromises you have to make.  Thankfully the dialog comes through loud and clear, and the composed music from Barry Goldberg actually sounds pretty good here.  Unfortunately a lot of atmosphere is lost by not having the use of multiple speakers, but you can only ask for so much.

Audio Commentary: Director Brian Yuzna:  Yuzna does a good job at keeping the viewer informed and giving more of an educational commentary rather than an entertaining one.  There is a lot of information he has to dispense, but there are some periods of silence where it could have benefited having someone to help move him along.

Audio Commentary: Actress Melinda Clarke and Special Make-Up Effects Artist Tom Rainone: This is a great little track with a lot of insight into the production and about all the effects and the two sharing their memories about the making of the film.  The two play off each other really well, and honestly, I enjoyed this commentary more than the one with Yuzna, though there are some points where it gets quiet as you can tell they are caught up in watching the film.

Ashes to Ashes: (26:48)  A conversation with Brian Yuzna and screenwriter John Penney that is loaded with information about what brought them to the project and their ideas for what they wanted the film to be.

Living Dead Girl: (18:56) An interview with Melinda Clarke as she discusses what influenced her to take the role of Julie.  This is better than the average throwaway interview we’re used to seeing; she’s candid and offers plenty of insight into the film.

Romeo is Bleeding: (17:21) An interview with J.Trevor Edmond about his first starring role; this interview is just as insightful as Clarke’s on the film.

Trimark and Trioxin: (13:33)  The producers and editor discuss their jobs on the film and how the film came together.

The Resurrected Dead: (18:47) A conversation with the special-effects artists along with behind-the-scenes footage discussing the gore effects in the film.

Vestron Video has once again delivered a Blu-ray for the fans to appreciate this lost gem of the 90’s.  Sure, there will be people who think I’m nuts for liking this, but this is the horror I grew up with, and I was excited to pick up at my local video store.  I love these kinds of films.  If you get a kick out of over-the-top gore and like a little cheesiness with your horror, then this is the film for you.

Brent Lorentson is a horror writer and film critic based out of Tampa, Florida. With a BA in Digital Film, he co-wrote and co-directed Scavenger Hunt. His short stories have appeared in various horror anthologies. In 2019 his short script Fertile Blood will be a part of the anthology horror film Slumber Party. He is currently working on his first novel A Dark and Secret Place set to be released in late 2019. Favorite Films: Taxi Driver, Fight Club, I Saw the Devil, The Wild Bunch, Dawn of the Dead, A Clockwork Orange, Pulp Fiction, Heathers, The Monster Squad, and High Fidelity.
Bad Santa 2 Mechanic: Resurrection (UHD Blu-ray) (4K)