Posted in: Disc Reviews by Jeremy Butler on December 1st, 2016 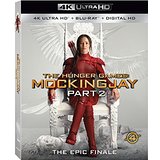 “In penance for their uprising each district shall offer up a male and female between the ages of 12 and 18 at a public reaping. These tributes shall be delivered to the custody of the Capitol and then transferred to a public arena where they will fight to the death, until a lone victor remains. Henceforth and forevermore this pageant shall be known as the Hunger Games.”

Now that all four films are out on UHD Blu-ray in glorious 4K, we have the opportunity to view them all again from the very beginning. It’s easier to catch the subtle nuances that were planted in the earlier films that would pay off over the four-film run. It took us four years to do that originally. Now you can do it in a day. Jeremy Butler takes us on the final part of that journey with The Hunger Games: The Mockingjay Part 2 (2015).

As always, the performances were fantastic, as each member of the cast has perfected their version of their character. One thing I noticed that differed from the others is that Gale’s arc is much more significant than in the previous films. We get to spend more time with this character, who has been more of a background character in the first couple of films. He was present, but not much focus was spent on him until the previous Mockingjay film; this time around, however, he is addressed more, and he has more interaction with the rest of the cast. Hemsworth takes the responsibility head-on and brings out a wide range of emotion, especially towards the conclusion in a pivotal scene with Jennifer Lawrence. Speaking of Lawrence, it goes without saying that she has essentially become the complete embodiment of Katniss Everdeen, and it is next to impossible to imagine anyone else ever playing her. This is an emotional film for her character as well, as she pretty much (like her counterpart) carries the entire situation on her shoulders.

Lawrence and Hutcherson’s chemistry continues to be the backbone of the film as they spend most of the story in the opposite of the previous films. The thing that drove the plot for the other films was no matter what the situation, Katniss always had the knowledge that Peeta loved her to drive her forward and to get her sane; however, their relationship is the opposite now, as her most trusted ally is now the biggest threat to her safety. Despite the antagonism between them, their connection is still palpable. Their first interaction where Peeta voices his regret for the action that started their connection really hits home.

The Hunger Games: The Mockingjay Part 2 is presented in its original aspect ratio of 2.40:1. The ultra-high-definition  image is arrived at by an HEVC codec. With such a visual franchise you would expect this ultra-high-definition image presentation to shine. You would be correct up to a point. Lionsgate made a serious fatal flaw in this franchise for 4K release. They included the feature-length bonus material on the 4K disc. That takes up serious space and bit-rate. So you end up with a film that is a definite improvement over the Blu-ray, but not likely as much as it could have been. Long shots suffer the most from the crowded disc. There’s a distinct loss of sharpness in these shots. Black levels that could have been spectacular are merely fair, and we lose some of the effect of the underground scenes with the creatures. Colors can be dynamic, particularly when you see a dab of vivid color against the mostly dreary palette of the film.

The Dolby Atmos presentation defaults to a nice 7.1. The audio presentation does not suffer from the crowded disc space. The surrounds are used mostly to provide nice echo sounds to put the characters believably in their spaces. James Newton Howard delivers a nice score, and the extra surround space makes it quite dynamic. Dialog is always clear and well-placed. Subs really come through during the many explosive scenes. The mix takes care not to walk over the subtle sounds that build atmosphere here.

There is an Audio Commentary with Director Francis Lawrence and Producer Nina Jacobson.

Pawns No More: The Making of Hunger Games: The Mockingjay Part 2: (2:21:45)   While this really should have been on its own disc, this feature is longer than the film itself and goes into every aspect of the film you could ever want. There’s a ton of participation from cast and crew with a ton of behind-the-scenes footage. There are eight parts with a play-all option. This is what features should be. Don’t make me work to see a few minutes at a time. Other studios need to take note here.

A Photographic Journey: (10:17) Murray Close was the still photographer on the film series. He talks about his career and his style of working. Of course, we see plenty of his stills and their context.

Cinna’s Sketchbook – Secrets of the Mockingjay: (9:22) The costume designers talk about the prop sketchbook and how it inspired and influenced the actual costume design of the film.

Panem On Display: (1:56) A promo for the interactive Hollywood attraction.

Jet To The Set: (41:56) An episode of the show where they visit Atlanta and theme the show on Hunger Games. (only on Blu-ray)

In conclusion, there is little doubt that this film will sell well on home video, but much more than that, it will leave fans with a resolution that they can appreciate. We have followed this group on their journey for years, but now it’s time for it to come to an end. Though I am saddened that it must, I am grateful to have received it in a way that I can be at peace with.

Jeremy Butler is a film school graduate of the International Academy of Design and Technology. He is been writing for Upcomingdiscs since 2012; however, movies have played a big part of his life for much longer. Favorite genres include horror, science fiction/fantasy, and comedy. Favorite movies are V for Vendetta, Boondocks Saints, Kiss Kiss Bang Bang, and The Godfather.
Looking: The Complete Series and The Movie (Blu-ray) Beauty & the Beast: The Final Season