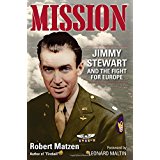 I think I see your problem. You have this list. It’s a list of people you need/want to buy a Christmas gift for. The trouble is that they’re into home theatre, and you don’t know Star Trek from Star Wars. You couldn’t tell a Wolf Man from a Wolverine. And you always thought that Paranormal Activity was something too kinky to talk about. Fortunately, Upcomingdiscs has come to the rescue every Christmas with our Gift Guide Spotlights. Keep checking back to see more recommendations for your holiday shopping. These gift guides ARE NOT paid advertisements. We take no money to publish them. You should not just be considering home video for that special person on your shopping list. This time of the year Jimmy Stewart often comes to mind. Of course, there’s the annual classic showings of It’s A Wonderful Life. But Jimmy Stewart was more than an Academy Award-winning actor. He was a bomber pilot during World War II. Stewart didn’t like to talk about his service and so most of us know very little about those days.

Now Robert Matzen has written Mission: Jimmy Stewart And The Fight For Europe. It’s a wonderful (pardon the pun) look at those days of heroic service. Matzen takes us inside of Stewart’s own thoughts and feelings thanks to interviews with surviving brothers in arms. He’s scoured Stewart’s own words and the histories that exist out there. This is a Jimmy Stewart so much like the man we remember from the movies, yet so much more complicated and courageous. This is a fascinating read. I’m going to be talking with the author next week and I can’t wait to share that chat with all of you here. In the meantime, you might want to check this book out to round out your Christmas shopping lists. I’m reading it now and it’s been hard to put down. Now you know why I’m falling behind on my work here. I’m going to be telling you more soon.

Gino Sassani is a member of the Southeastern Film Critic's Association (SEFCA). He is a film and television critic based in Tampa, Florida. He's also the Senior Editor here at Upcomingdiscs. Gino started reviewing films in the early 1990's as a segment of his local television show Focus. He's an award-winning recording artist for Omega Records. Gino is currently working on his 8th album Merchants & Mercenaries. Gino took over Upcomingdiscs Dec 1, 2008. He works out of a home theater he calls The Reel World. Favorite films: The Godfather, The Godfather Part II, The Body Snatcher (Val Lewton film with Karloff and Lugosi, not the pod people film), Unforgiven, Gladiator, The Lion King, Jaws, Son Of Frankenstein, The Good, The Bad And The Ugly, and Monsters, Inc.
Mad Max: Fury Road Black & Chrome (Blu-ray) Oppo Announces It’s UHD Blu-ray Player: Meet The UDP-203