Posted in: Release Announcements by Gino Sassani on December 12th, 2016

We were one of the first sites to start reviewing UHD Blu-ray releases. I managed to get my hands on the Samsung player a bit early and started reporting on those first discs. What you don’t know is how much of a pain that Samsung player really is. From the remote down to the function it is a bit of a nightmare to operate. Of course, I’ve been spoiled by the Oppo players I usually use for my reviews here. Oppo took their time launching their unit. I suspect they wanted to make sure they got it right. You have been emailing me for months about an Oppo UHD player. I was sworn to secrecy…until now. Meet the Oppo UDP-203. I’ll be reviewing a unit as soon as I can get my hands on one. I’m told it will be soon. For now here’s the official press release from Oppo: 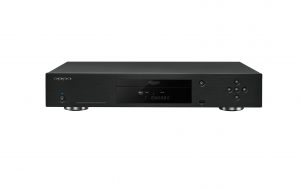 The design of the UDP-203 focuses on quality playback and universal compatibility with multiple disc and file formats. In addition to the latest UHD Blu-ray, the UDP-203 supports regular Blu-ray, Blu-ray 3D, DVD, DVD-Audio, SACD, and audio CD. The UDP-203 is equipped with two USB 3.0 ports on the back and another USB port on the front. Users can play video, music and photos from USB hard drives or thumb drives. Built-in 802.11ac Wi-Fi or Gigabit Ethernet connects the UDP-203 to users’ home networks, so users can easily play media files stored on computers and home servers.

The UDP-203’s video performance and universal compatibility is further complemented by its support of lossless high resolution audio. The player decodes audio file formats such as AIFF, WAV, ALAC, APE and FLAC. It also directly plays Direct-Stream Digital audio files in stereo DSD64/128 or multi-channel DSD64. With internal decoding of Dolby TrueHD and DTS-HD Master Audio, and bitstream output for object-based immersive audio formats such as Dolby Atmos and DTS:X, the UDP-203 delivers great sound for both movie soundtracks and music. Besides HDMI, audio is concurrently available through the 7.1-channel analog outputs, featuring “Velvet Sound” 32-bit premium digital-to-analog converters from AKM of Japan.

In order to provide a premium user experience with quick start-up times and fast response, the UDP-203 is designed with a purist approach in mind for disc and file playback, and so it does not carry internet video and music streaming apps. Instead, an HDMI 2.0 input port that supports UHD resolution is available for users to connect an external streaming device. This approach affords users the flexibility to choose from a wide range of streaming devices and easily upgrade as streaming technologies evolve, while still taking advantage of the UDP-203’s audio and video processing capabilities.

Continuing OPPO’s tradition of providing firmware updates long after the initial release, the UDP-203 is upgradable via an easy-to-perform firmware update process. Since the Ultra HD Blu-ray format is still very new, customers can expect ongoing firmware updates that introduce new features and resolve issues. Leveraging hardware designed to support Dolby Vision, customers can expect a firmware update in early 2017 that brings Dolby Vision support to the player. Dolby Vision transforms the TV viewing experience by delivering striking highlights, brilliant colors, and deep darks never before seen on standard television screens, and OPPO is committed to bringing this exciting technology to the UDP-203.

UDP-203 customers will have years of enjoyment from this expertly designed and solidly built player. A brushed aluminum front panel, steel chassis and gold plated connectors not only present a sleek aesthetic, but also ensure dependable operation and reliable connection. Integration-friendly features such as RS-232 control, back panel IR sensor and third-party IP control make the UDP-203 a great choice for any home theater system.

Gino Sassani is a member of the Southeastern Film Critic's Association (SEFCA). He is a film and television critic based in Tampa, Florida. He's also the Senior Editor here at Upcomingdiscs. Gino started reviewing films in the early 1990's as a segment of his local television show Focus. He's an award-winning recording artist for Omega Records. Gino is currently working on his 8th album Merchants & Mercenaries. Gino took over Upcomingdiscs Dec 1, 2008. He works out of a home theater he calls The Reel World. Favorite films: The Godfather, The Godfather Part II, The Body Snatcher (Val Lewton film with Karloff and Lugosi, not the pod people film), Unforgiven, Gladiator, The Lion King, Jaws, Son Of Frankenstein, The Good, The Bad And The Ugly, and Monsters, Inc.
Holiday Gift Guide Spotlight: Mission: Jimmy Stewart and the Fight for Europe Tuesday Round Up: December 13, 2016