Posted in: Disc Reviews by Brent Lorentson on December 14th, 2016 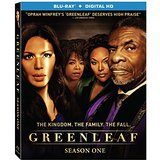 relatively out of the spotlight as she has worked on making her cable network channel, OWN, a success.  While I wouldn’t ever say I was a fan of Oprah’s work on the screen, I could appreciate what she did in The Color Purple and Beloved. This being said, I have to admit I was a bit reluctant to take a title that at first glance seemed to be a show that would be heavy-handed with its subject matter centered around the church.  Despite my concerns, I’m glad I picked up this title, because despite how it handles some very familiar topics, it’s presented in a manner that not only feels fresh but is truly an engrossing show that manages to suck the viewer in and kept me wanting to see what would happen next.

Grace Greenleaf (Merle Dandridge) returns to her Memphis home with her daughter, Sophia (Desiree Ross), to pay her final respects to her sister who has passed on.  Grace returns home but is hardly greeted with open arms.  The Greenleaf name is one that has a far reach, due to the fact that Bishop James Greenleaf (Keith David) runs Calvary, a large mega-church that has thousands of followers, with several members of the family taking on large roles in the day-to-day functioning of the church.  The Greenleaf family (at least a good portion of them), all seem to live together under one roof, in a mansion that is situated upon a large, picturesque piece of property.  The show wastes no time in setting up all the drama that unfolds behind the walls of the mansion and inside the church.

While getting to know the family, there is Kerissa (Kim Hawthorne) and Jacob (Lamman Rucker) Greenleaf, the husband and wife duo, who are trying to be the successors in the family.  When we first meet them, they are a broken couple facing infidelity issues while also struggling to secure their “rightful” spot in the church.  When it comes to character arcs in a series, it’s these two that seem to have the most development over the course of the first season, though they are only a fraction of this large ensemble.  There is also Charity (Deborah Joy Winans) and her husband Kevin (Tye White); they are expecting twins, and if their pregnancy didn’t offer up enough drama, there is Kevin attempting to come to terms with his sexuality.  And yet there is still more drama to add to the mix.

But the most divisive character of the show is Lady Mae Greenleaf (Lynn Whitfield). Not only is she the Bishop’s wife, but she is the mother to Grace, Jacob, and Charity.  It’s a little frustrating seeing how she rejects Grace’s return home; even when she starts to reveal her reasons for contempt towards her daughter, it’s hard to sympathize with her.  Though Grace is technically the main character of the series, Lady Mae is just as crucial of a character to the story.  The major conflict that comes between these women centers on Grace’s uncle and Mae’s brother Mac (Gregory Alan Williams).  Twenty years prior, Grace accused Mac of sexually assaulting her recently deceased sister. The accusation did more than just rock the family, and it’s a scandal the Greenleafs have dealt with and covered up for decades.

All this is unfolding while the church is under investigation for taking advantage of their tax exemption status. And those are just the bullet points of this drama.

When the show slides into the dynamics of how the church works and the power struggle over who will deliver sermons to the congregation, I thought this would be the portion that would lose me.  Instead the drama that unfolds here is equally engaging despite what you may or may not believe.  That’s the challenge I’ve seen in the past with shows that incorporate religion into their storyline; many times it seems to fail. Big Love is one example that still frustrates me despite its great performances.  But for Greenleaf, this is a challenge they’ve met with head-on and succeeded without ever feeling they are trying to preach to the audience.  I mention Big Love because I feel at times the show had to justify its beliefs to the audience, where as Greenleaf has the characters trying to justify their beliefs amongst each other.  When the characters step up to the pulpit, these are some emotional performances that tend to lead to some character-defining moments as they seem to be forced to face certain conflicts in the most public way.  These are some dramatic performances that are benchmarks in the show and carry weight that had me as a viewer looking forward to seeing the fallout from these moments, and I say this in the best possible way; after all, good drama is what we want.

What makes this show work, what makes this not seem so convoluted with so much drama all converging at once, the praise for the success should fall onto the cast.  This is one of the best ensemble casts I’ve seen in some time where everyone has more than a few moments to shine.  While a lot of the subject matter may not be so family-friendly, the way it is handled is done with taste and class that has seemed to have disappeared lately as TV dramas have taken a more raw approach.

Equally matching the talent on screen is the talent behind the scenes.  Creator Craig Wright (Tyrant and Dirty Sexy Money) has crafted an ensemble drama that reaches for Shakespearean themes and delivers wonderfully flawed three-dimensional characters who feel fresh despite being familiar tropes.  Oprah Winfrey takes on the Executive Producer role and has spared no expense on this drama; she even makes time to have a few appearances in the show.  This is an achievement she should be proud of, and it’s a show that is setting up to become a large-scale drama that I’m hopeful will only continue to impress as it has while it’s about to begin its second season.  This beautifully-shot drama snuck up on me and made me a fan, and I’m patiently  waiting to see what happens next.

Greenleaf Season 1 is presented in the aspect ratio 1.78:1.  The 1080p image is arrived at with an AVC MPEG-4 codec at an average of 30 mbps.  I’m just going to say it: this is one of the best-looking TV shows that is on air.  From the beautiful location of the Greenleaf estate that has so much depth and detail from the greens and overcast skies, to the interior of the church that has warmth in gold and browns, this transfer is beautiful.  The textures, from the clothing to the set decorations, come through beautifully, and the only times the image wasn’t at a hundred percent it was due to low light sequences.  As technology only continues to improve, I’m curious about where the line comes into play with the threshold of perfection.  While the detail is exceptional here, I can’t imagine how it can get better without becoming “too detailed”.

The DTS-HD Master Audio 5.1 It comes as no surprise that this audio mix comes to life when the show enters into the scenes where we are in the church and the choir is singing.  This is well executed and has you smack-dab in the middle as though you were a member of the Greenleaf congregation.  The dialog comes through clearly, and surprisingly the exterior scenes sound great. The subtle ducks sounds on the lake or scenes with approaching sirens even had me feel the need to pause the show to be sure they were not coming down my street.

The Oprah Winfrey Conversations: (29:19) A collection of brief conversations between Oprah and members of the cast and crew.  These are more insightful that your standard Q&A extras simply because, well, Oprah is pretty much as good as it gets for hosting interviews.

Creating Greenleaf: (10:21) Craig Wright and Oprah Winfrey discuss the motivations behind the creation of the series and what they hoped to achieve with the series.

Gag Reel: (2:32) Your standard collection of miscues and flubbed lines.

Music Sessions: Greenleaf: (3:14) A brief look at the music that we see in the series.

This is one of those shows I’m glad I didn’t miss.  It’s a show that is so easy to relate to despite your beliefs or the color of your skin, simply because everyone can relate to family drama.  With this Blu-ray coming out just in time for Christmas, it’s a title I hope more people can experience, and it’s something that actually hits on topics that are worth talking about.  Greenleaf is a show that points out that even the most righteous and respected have their flaws, and we get a glimpse at how this family confronts these indiscretions for better or for worse.

Brent Lorentson is a horror writer and film critic based out of Tampa, Florida. With a BA in Digital Film, he co-wrote and co-directed Scavenger Hunt. His short stories have appeared in various horror anthologies. In 2019 his short script Fertile Blood will be a part of the anthology horror film Slumber Party. He is currently working on his first novel A Dark and Secret Place set to be released in late 2019. Favorite Films: Taxi Driver, Fight Club, I Saw the Devil, The Wild Bunch, Dawn of the Dead, A Clockwork Orange, Pulp Fiction, Heathers, The Monster Squad, and High Fidelity.
C.H.U.D II: Bud The Chud Little Men