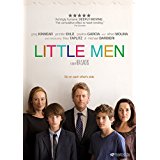 All too often do indie films fall under the category of “character study”. It’s almost as if that the entire “independent” genre has divided itself into these dramas focusing on painfully slow character development or budgetless, empty husks of action films riddled with terrible CGI. I have seen independent films that held my attention with captivating writing, but they seem to be few and far between. Little Men is no exception to the trend: it did have some interesting character development, but the story had great opportunities for intense conflict that just never followed through.

The story takes place in New York, where a failed actor, Brian (Greg Kinnear), and his mildly successful wife, Kathy (Jennifer Ehle), are trying to make ends meet. All the while, they are trying to put their young son, Jake (Theo Taplitz) through school. After the death of Brian’s father, the little family sees a glimmer of hope with the inheritance of a tailor shop run by Leonor (Paulina García), assumed to be the deceased’s old flame. During the slow process of figuring out how to legally take the business away from Leonor, Jake befriends her son, Tony (Michael Barbieri), setting up the primary anxieties of the film.

The reason I name each of the actors with key roles is their performances were actually really great. I enjoyed all of the chemistry I saw, particularly the relationship that develops between the two boys. Theo Talpitz especially: this was his second film, and I would imagine it might be a breakout role. His ability to read his fellow actor’s emotion, whether it is a seasoned veteran or an amateur, he knew how to utilize nonverbal communication impressively for a boy his age. Greg Kinnear is fantastic as usual, but he nails the role of a subtly angry dad rather impressively. The acting is easily the most enjoyable part of the film, so watching the characters develop wasn’t very difficult. Unfortunately, that development did not affect the pace of the film. At an hour and twenty-four minutes, the film dragged.

The film’s writing is the biggest contributor to my rating. I really appreciated the story: it is an inherently compelling conflict. However, as a whole, the conflict in the film is severely underwhelming, and it was wrapped up in two separate scenes. Ideally, if the conflict was introduced at the absolute beginning and carried on throughout, the film would have been much more enjoyable. The character study hit its mark, but when you have story that is inherently compelling, I want to be impressed by the creativity involving the characters and the weight involving emotions. Little Men had tremendous potential to be a very intense drama about a property dispute between a widowed lover and an estranged son. There are a lot of implicit themes with Kinnear’s character being a disappointment and his struggle to raise his own son in the way that he wanted to be raised as a child. Add in the tension of trying to take the shop from your father’s ex-lover who somewhat agreed with him about your status of a disappointment: you can see why I am a little upset that that wasn’t played out explicitly.

As a character study, and if you really like Greg Kinnear, the film is most certainly worth the watch. Aside from those factors, the film might be difficult to sit through without becoming bored. The casting and acting are very redeemable, but when it comes to the film as a whole, I can’t bring myself to give it a high rating simply because of the amount of untapped conflict.