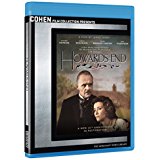 That bit of wisdom is offered by Henry Wilcox, the scheming, obliviously shameless wealthy capitalist in Howards End. The 1992 Merchant-Ivory film — which gets a spiffy, 25th Anniversary Blu-ray release courtesy of Cohen Media Group — is based on an E.M. Forster novel that was published in 1910. However, Henry’s philosophy towards the less fortunate members of society strikes a chord more than 100 years since the character made his debut. And that’s just one reason Howards End is worth another look as we prepare to turn the calendar to 2017.

“I’m afraid that in nine cases out of 10, nature pulls one way and human nature the other.”

The three families’ lives continually collide in unexpected ways. Helen begins an ill-fated romance with one of Henry Wilcox’s sons. Some time later, Margaret befriends and forms a strong connection with the ailing Ruth. (Henry eventually becomes involved with Margaret as well.) Meanwhile, the Schlegel sisters (mostly Helen) befriend Leonard Bast and try to help him find better employment, with disastrous results. Much of the action revolves around Howards End, Ruth’s beloved and stately rural family home. One of the movie’s biggest questions centers around who will inherit Howards End once Ruth is gone. In that sense, Howards End serves as a stand-in for England as a whole: will the country be inherited by the wealthy upper class, the scrappy lower-classes, or someone in between?

Howards End was directed by James Ivory, produced by the late Ismael Merchant, and written by the late Ruth Prawer Jhabvala. The trio collaborated on more than 20 films starting in the 1960s, but the case can be made that Howards End (which earned nine Oscar nominations and three wins) represented the pinnacle of the Merchant-Ivory brand. Howards End was the third Merchant-Ivory adaptation of an E.M. Forster novel following 1985’s A Room with a View and 1987’s Maurice. It was also directly followed by 1993’s The Remains of the Day, which essentially made the Merchant-Ivory brand synonymous with lavish, British period dramas. (Which is a bit amusing considering Merchant was Indian and Ivory is American.)

While it’s certainly tempting to lump Howards End into the same (ornate) box as other Merchant-Ivory productions, the movie does an uncommonly nimble job of juggling and interweaving its various plot lines and families. The passage of time sometimes feels jarring, but I suspect that was done on purpose to show how someone’s lot in life can change in the blink of an eye. It also doesn’t hurt to have some of the best actors in the world to help convey the story’s many nuances.

I don’t know that Thompson has ever been better than she is as Margaret, a sharp and irresistibly vivacious force who nevertheless finds herself uneasily straddling two different worlds. It’s tempting to expect fireworks from Hopkins, who was coming off his iconic work as Hannibal Lecter in The Silence of the Lambs. Instead, the actor is pitch perfect as the sort of restrained upper class aristocrat who shirks personal responsibility in favor of following the rules of “proper society.” Henry should be completely loathsome, but Hopkins imbues his performance with a winning sincerity that makes you empathize with the character’s viewpoint. Redgrave is a wonderfully ethereal presence during her relatively brief screen time, and Bonham Carter brings her signature spark to Helen. The one false note (and it’s an important one) comes courtesy of West, who was a relative newcomer at the time. Leonard Bast is supposed to be a romantic, upwardly-mobile hero worthy of the Schlegel’s attention, but West mostly comes off as a lightweight compared to his more accomplished fellow cast members.

That being said, Howards End ends on a thoroughly satisfying note that ties together all of the story’s themes and hints at what the rest of the 20th century (and beyond) had in store for England.

Howards End is presented in an aspect ratio of 2.50:1. The 1080p image is arrived at with an AVC MPEG-4 codec at an average of 34 mbps. The somewhat unusual aspect ratio differs from the 2.35:1 framing for the Criterion Collection’s 2009 release of Howards End. The result is a subtle, almost imperceptible difference in some of the film’s panoramic shots from what your eye might be accustomed to seeing. Otherwise, it’s not much f a distracting change. Cohen Media Group has also trumpeted this as a new “4K restoration”, and there are certainly moments in this film that pop like never before. The greens in the English countryside certainly jump out, but I was most struck by a quick sequence featuring a field of bluebells. That being said, the film boasts a more desaturated and chillier palette than I expected, which somewhat washes out some of the action. Fortunately, fine detail is excellent throughout, which allows us to appreciate the incredible production design and costume work.

The DTS-HD Master Audio 5.1 track is, sort of like the film itself, a master class of subtlety and nuance. While this is a very front speaker-focused presentation, the ambient/atmospheric noise in the rear channels is pitched perfectly to provide a sense of immersion without ever distracting from the main action. Fidelity is as spot-on as you’ll find during scenes where music intentionally drowns out some dialogue. Speaking of music, Richard Robbins’ Oscar-nominated score swells majestically across all channels when the need arises. Overall, this is a restrained but thoroughly impressive sonic presentation.

All of the bonus material is presented in HD. The audio commentary is available on Disc 1, while the rest of the special features can be found on Disc 2. There is also a Collector’s Booklet with stills from the film along with  written contributions from director James Ivory, production designer Luciana Arrighi, and more.

Audio Commentary with critics Wade Major and Lael Lowenstein: The critics speak knowledgeably and enthusiastically about the Merchant-Ivory output — Howards End is part of what they consider to be the filmmaking team’s “golden period” — and help point out plenty of trivia and motifs (characters looking out of windows). They also note slight changes from E.M. Forster’s book and helpfully expand upon some of the story’s themes. Definitely worth a listen.

2016 Conversation Between James Ivory and Laurence Kardish: (26:43) The director chats with Kardish, the former senior curator of film at the Museum of Modern Art, about Howards End and its relevance 25 years after the film’s release. (The duo agrees that the story’s societal critique feels even sharper today.) There’s also some talk about Forster’s original novel and the way it rankled many readers upon its publication in 1910. Very interesting stuff here to place the movie in context for people who might be discovering it for the first time. This featurette is curiously preceded by a trailer for the entire Merchant-Ivory filmography.

2016 Interview with James Ivory and Vanessa Redgrave: (8:08) This interview took place during the most recent Cannes Film Festival, and Redgrave seems as shocked as anyone that it’s been 25 years since the movie’s release. This is a looser, more informal chat in which Ivory refers to himself, producer Ismail Merchant, and screenwriter Ruth Prawer Jhabvala as the three different branches of government.

2016 Q&A with James Ivory and critic Michael Koresky: (27:17) This chat took place at the Lincoln Center in New York and includes some fun tidbits, like the fact that Redgrave assumed she was playing a different Mrs. Wilcox. This one feels a bit redundant if you’ve already watched Ivory’s conversation with Kardish, but still worth a look.

1992 Behind the Scenes Short Featurette: (4:32) Intersperses clips from the film with old talking head interviews with Ivory, stars Emma Thompson, Anthony Hopkins and others. Mostly, this dated featurette gives you a greater appreciation for the restoration work done on this new edition.

Building Howards End: (42:37) This extensive “Making Of” begins with the project’s inception (the screenwriter essentially dangled the book in front of Merchant and Ivory) and covers the impressive production. Mostly, it’s a treat to see and hear Merchant (who died in 2005) speak so passionately about the project.

The Design of Howards End: (8:58) Production designer Luciana Arrighi (who won an Oscar for her work on Howards End) and costume designer Jenny Beavan (whose work here was Oscar nominated) take center stage, while cast members chime in to say how the period clothing and sets helped inform their performances.

James Ivory Remembers Ismail Merchant: (12:11) Ivory pays tribute to his long-time professional and domestic partner, recalling their first meeting at an Indian consulate. The director also admits that he doesn’t have the same drive to make films since Merchant isn’t around anymore to help will them into existence.

However, the real reasons this movie is worth a re-watch is because it features fantastic performances that have aged well and societal themes that still feel relevant today. Oh yeah…the film  also looks pretty damn good thanks to this latest restoration.