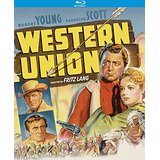 I think I see your problem. You have this list. It’s a list of people you need/want to buy a Christmas gift for. The trouble is that they’re into home theatre, and you don’t know Star Trek from Star Wars. You couldn’t tell a Wolf Man from a Wolverine. And you always thought that Paranormal Activity was something too kinky to talk about. Fortunately, Upcomingdiscs has come to the rescue every Christmas with our Gift Guide Spotlights. Keep checking back to see more recommendations for your holiday shopping. These gift guides ARE NOT paid advertisements. We take no money to publish them. Fox has opened their vaults for the fans of classic movies. It’s part of their Cinema Archives Collection on DVD, and we have five of them to recommend to you here:

Fans of Hell On Wheels will appreciate some of this vintage story. Edward Creighton (Dean Jagger) hopes to bring the two American coasts together with his telegraph service. He ends up hiring Vance Shaw, played by Randolph Scott, who has a posse on his tail. But Shaw shows character by risking his own freedom to save Creighton’s life. The film examines the intrusion of this “modern” technology on the lands it must cross to unite the nation with an instant form of communication.

The film was directed by the great Fritz Lang, who is better known for silent screen classics like Metropolis and the groundbreaking M that launched the career of Peter Lorre. The film was based on a novel by famed Western writer Zane Grey.

Maureen O’Hara stars as actress Julie Beck, who discovers that she is dying. She’s worried about leaving her husband alone and adopts a young girl named Hitty (Marshall). When Beck does die, her husband Bill (Payne) is an emotional wreck. He pushes everyone away and is heading into a downward spiral. That’s when Hitty thinks that Beck is visiting her from the grave to giver her pointers on how to help Bill recover. When he finally pushes Hitty away too, Bill hears something that finally turns his life around.

This one was directed by Fritz Lang’s nephew Walter Lang. Of course Walter never gave us near the eternal films that his uncle provided. This one is one of his better and most memorable, particularly for the performance he got out of young Connie Marshall as Hitty. But Walter Lang did manage a classic or two of his own with Yul Brenner’s The King And I and Ethel Merman staring with Marilyn Monroe in There’s No Business Like Show Business. He also brought Spencer Tracy and Katharine Hepburn back together in Desk Set.

Clifton Webb stars as automobile tycoon Ernest Gifford. He believes that behind every great design engineer stands a strong woman. So he sets about to observe three couples, looking for his next plant manager. It’s amusing to watch these couples interact. The husbands may want the job, but the women have some concerns. The film stars Lauren Bacall, Fred MacMurray, and the voice of Fred Flintstone, Alan Reed.

Long before Mrs. Doubtfire, Clifton Webb stared as Lynn Belvedere, a man trying to win a nanny job by pretending to be a woman. The gender-bend certainly takes Harry King (Robert Young) and wife Tacey (Maureen O’Hara) by surprise. The thing is that Belvedere is actually a brilliant nanny and is wonderful with the kids. If only they knew what he was up to on those mysterious night visits.

Clifton Webb is absolutely perfect in this film. He came from a Broadway background, and he gets to put those skills on display here. He even gets to show off dance skills that he wasn’t really known for in the movies. Webb even did a radio version of the film a year later where he reprised the role of Belvedere. The film would go on to produce a series of sequels and a 1990 television series remake, all under the name Mr. Belvedere…

This one is almost a greatest hits of the other films in the collection. It’s another Walter Lang direction effort and many of the stars here can also be found in others of the collection: Robert Young, Clifton Webb, and Maureen O’Hara some of the most prominent.

Another Walter Webb film brings together Betty Grable, Cesar Romero, and George Montgomery. It’s the story of con artist Eddie (Montgomery), who manages to get himself at Joe Rocco’s (Romero) nightclub. He becomes a rival not only in business, but for the affections of Kate (Grable). There are some nice touches of comedy from guest star Phil Silvers. It’s all written by former Marx Brothers writer George Seaton, who was part of the writing crew on both A Day At The Races and A Night At The Opera. He’s likely best known, especially at Christmas, for writing Miracle On 34th Street.

Gino Sassani is a member of the Southeastern Film Critic's Association (SEFCA). He is a film and television critic based in Tampa, Florida. He's also the Senior Editor here at Upcomingdiscs. Gino started reviewing films in the early 1990's as a segment of his local television show Focus. He's an award-winning recording artist for Omega Records. Gino is currently working on his 8th album Merchants & Mercenaries. Gino took over Upcomingdiscs Dec 1, 2008. He works out of a home theater he calls The Reel World. Favorite films: The Godfather, The Godfather Part II, The Body Snatcher (Val Lewton film with Karloff and Lugosi, not the pod people film), Unforgiven, Gladiator, The Lion King, Jaws, Son Of Frankenstein, The Good, The Bad And The Ugly, and Monsters, Inc.
Morgan (UHD Blu-ray) (4K) Tuesday Round Up: December 20, 2016