Posted in: Disc Reviews by John Delia on December 19th, 2016 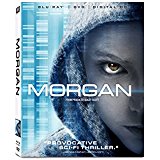 The sci-fi horror thriller Morgan turns brutal when a scientific experiment goes awry, turning a lab into a blood-fest. Now on Blu-ray and DVD in a combo pack that includes an HD download, the film has all the trappings for a nighttime couples’ shocker. You will not want to see this one alone, especially if you want to get the best out of your video choice. So turn the lights down, get the popcorn ready, maybe your favorite beverage, and expect the unexpected. Lee Weathers (Kate Mara), the Risk Manager of SynSect, a genetics research company, arrives at a secluded lab surrounded by a forest following a reported incident of violence.  She’s there to check out the company’s newest L-series modified human organism labeled Morgan (Anya Taylor-Joy) who attacked Dr. Kathy Grieff (Jennifer Jason Leigh).

Getting to the bottom of the problem that caused Morgan to crack, Weathers realizes that the employees at the lab are sympathetic to their humanoid project. They call her a member of their family and have looked after her since a baby. Not in agreement with the staff, Weathers is determined to take the case into her own hands.

Failing to get a hold of the situations now arising from the protective doctors and their assistants, she calls in Dr. Alan Shapiro (Paul Giamatti), a no nonsense arbitrator.  Under first-time director Luke Scott, the film moves along at a fast clip, working his actors into scenes on the fly.  It’s a good technique, providing you understand what their job entails at the lab and relationship they have with Morgan. Thank goodness for the rewind and pause button.

The performances make the film work, with Kate Mara and Anya Taylor-Joy fighting it out physically and for screen time. Mara keeps Weathers intense, very serious, assertive, and cautious as she investigates the situation at the lab. She knows that Morgan may have had a lapse in judgment, but also knows that the humanoid shouldn’t have attacked the doctor.  Suspicious of everyone there, she doesn’t trust their judgment, including Dr. Grieff, the person who was assaulted.  You may have seen Kate in American Horror Story as the heinous Hayden McClaine, who can wield a wicked knife. It’s that kind of character she delivers in the film Morgan.

Morgan is presented in its original aspect ratio of 2.40:1. The ultra-high-definition  image is arrived at by an HEVC codec. There are some wonderful vistas that dominate the setting for the film. The ultra-high-definition image presentation offers some nice deep depth, particularly with bodies of water. The complex is a dark and sterile environment, but the sharpness pops, as do the rather good black levels. You get nice shadow definition … except, of course, when Scott doesn’t quite want you to. It’s an accurate color palette that doesn’t fall to the common UDH temptation to oversaturate the colors. Close-ups tap into the eerie nature of the titular character. She’s just a little off in color and texture, and it’s enough to make you more than a little uneasy.

The DTS-HD-MA 7.1 actually takes advantage of the close quarters. Of course, dialog is going to be the primary concern, and it’s handled just fine. The subs are particularly nice, allowing a dynamic bass response at just the right moments. The score and audio presentation do a fine job of keeping you on edge and work hand in hand with the unpredictable nature of the Morgan character. The surrounds are strictly there for a little of the score and a creep factor. Just a whisper of sound is often enough to help maintain the tension atmosphere that Scott is trying to deliver with this film. It works.

Modified Organism – The Science behind Morgan: (19:39) This one talks about genomics and many exciting findings in the field of genetics. Here Luke Scott talks about the future of genetics and how his film touches on the subject. Doctor of Philosophy John Harris, professor of Bioethics at the University of Manchester, talks about intervening in the course of evolution.

Deleted Scenes: (6:03) There are five with a play-all option. There is also an optional commentary with Luke Scott.

Loom: (20:26) A short film made by Director Luke Scott.  It stars Geovanni Ribisi and Jellybean Howie.  I was probably the inspiration to direct the film Morgan. Caution: the film contains nudity and some violence.

Fleshing out a humanoid that’s developed into a prime experiment that may be out of control, Anya Taylor-Joy has to be enticing as well as cunning.  Able to put on a sweet façade, one that lures her clinical workers to defend her, Anya develops an enigmatic Morgan.  Her doctors adore her, especially Dr. Amy Menser (Rose Leslie), who has the job of introducing Morgan to the outside world. But it’s Weathers she has to convince that the outburst can be controlled, and that’s where the conflict begins.

John Delia has been on all sides of the movie business from publicity, writing for publications and on line blogs, script writing, to film making. Writer, critic, film editor he has worked as a film critic on this second go around for 14 years. He earned his Bachelor’s degree at the college of Journalism and Communications at the University of Florida in Gainesville, Florida. John is an active member of the Southeastern Film Critics Association (SEFCA) . Favorite Films: Lord of the Rings/Hobbit trilogies, The Godfather trilogy, the Indiana Jones trilogy (I didn't like the 4th), The Avengers and for TV it's Game of Thrones. As for animation it's a tie between anything Pixar and everything Hayao Miyazaki.
Rogue One: A Star Wars Story Holiday Gift Guide Spotlight: Fox Cinema Archive