Posted in: Uncategorized by Gino Sassani on January 11th, 2017 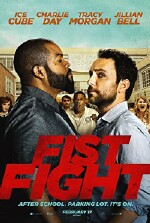 On Feb 17th, 2017 Warner Brothers will release the comedy Fist Fight starring Ice Cube and Charlie Day. The two teachers come into conflict when one gets the other fired. An old-fashion afterschool fist fight between the stars is the consequence. I’ll have a chance to tell you my thoughts on the film when it comes out.  I had the rare opportunity to sit down with Ice Cube to talk about the film. Fortunately, he didn’t challenge me to a fight after our talk. You can check out the film in Feb. Click here to watch the video with Ice Cube

Gino Sassani is a member of the Southeastern Film Critic's Association (SEFCA). He is a film and television critic based in Tampa, Florida. He's also the Senior Editor here at Upcomingdiscs. Gino started reviewing films in the early 1990's as a segment of his local television show Focus. He's an award-winning recording artist for Omega Records. Gino is currently working on his 8th album Merchants & Mercenaries. Gino took over Upcomingdiscs Dec 1, 2008. He works out of a home theater he calls The Reel World. Favorite films: The Godfather, The Godfather Part II, The Body Snatcher (Val Lewton film with Karloff and Lugosi, not the pod people film), Unforgiven, Gladiator, The Lion King, Jaws, Son Of Frankenstein, The Good, The Bad And The Ugly, and Monsters, Inc.
Girls: The Complete Fifth Season (Blu-ray) Patriots Day