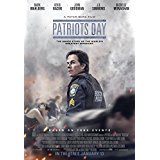 Too soon? That’s a question filmmakers looking to tackle a real-life tragedy from the recent past must ask themselves. The past several months have nevertheless brought us a mini-run of movies based on true calamities. Clint Eastwood’s Sully used the “Miracle on the Hudson” to explore the nature (and context) of heroism. Peter Berg’s Deepwater Horizon painstakingly chronicled the events that led to the famous oil rig disaster on the Gulf of Mexico. But the best movie of that bunch is Patriots Day, Berg’s visceral, all-encompassing, and thrilling account of the Boston Marathon bombing in 2013.

Patriots’ Day is a state holiday that commemorates the first battles of the American Revolution, and it is most closely associated with Massachusetts. The Boston Red Sox play a morning game at home, and (more famously) the city hosts the Boston Marathon, the world’s oldest annual event of its kind. The film’s surprisingly humorous opening scene takes place on the eve of the big day and introduces us to Boston P.D. Sgt. Tommy Saunders (Mark Wahlberg), who is stuck in the department’s doghouse for some unspecified reason. Part of Tommy’s punishment is being forced to work near the marathon’s finish line the following day.

From there, we meet a series of characters — including MIT policeman Sean Collier (Jake Picking), shy Chinese immigrant Dun Meng (Jimmy O. Yang), Watertown police Sgt. Jeffrey Pugliese (J.K. Simmons) ­— who will be gravely impacted by a terrible act none of them know is coming. The swift and effective introductions eventually lead into the race itself, which Berg stages with maximum tension by using a seamless mix of real-life archival footage and new material created for the movie. (The dread-filled score by Oscar winners Trent Reznor and Atticus Ross also provides a crucial assist.) I don’t mind admitting that I was startled when the first explosion occurred, despite the fact that we all knew it was coming.

The rest of Patriots Day chronicles the exhaustive (and exhausting) efforts to capture the bombers. The movie — which was co-written by Berg, Matt Cook, and Joshua Zetumer — takes a similarly 360-degree approach to chronicling the manhunt, which the film marks by “Hours After the Blast.” Boston Police Commissioner Ed Davis (John Goodman) is the more hot-headed counterpart to FBI agent Richard DesLauriers (Kevin Bacon), who takes over the investigation once it is deemed an act of terror. But the most surprising aspect of Patriots Day is the amount of screen time and depth given to Dzhokhar and Tamerlan Tsarnaev (Alex Wolff and Themo Melikidze), the brothers who perpetrated the explosions.

We meet the Tsarnaevs at the same time we are introduced to some of the victims and soon-to-be-heroes from the aftermath of the explosions. It’s an interesting dramatic choice and a subtly effective way to convey the notion that extremists like the Tsarnaev’s are part of the tapestry of a major city like Boston, just like the young couple whose female half can’t properly pronounce “Red Sox.”

In addition to Deepwater Horizon, Berg and Wahlberg previously teamed up for Lone Survivor, another true-life tale of American heroism. While Lone Survivor takes place during the literal war in Afghanistan, Berg temporarily transforms Boston into a war zone. And I’m not just talking about the explosive confrontation between the bombers and the police in Watertown (which is so insane that I wouldn’t be surprised to learn it was somewhat exaggerated for the film): the sight of armed officers and military personnel patrolling the streets of an American city remains striking. Patriots Day also takes the time to linger over and acknowledge the loss of life, which is a refreshing and bracing change from the way death is usually glossed over in most action/disaster/superhero flicks.

Of course, it’s much harder to be reckless with on-screen violence when you’re dealing with a disaster from the recent past where real people were killed and wounded. The most notable departure from reality here is the Tommy character, a complete and not-really-necessary invention who serves as an audience surrogate at every key moment of the investigation. Wahlberg nevertheless does brash, funny, profanely earnest Wahlberg things, which makes him a solid and entertaining entry point for the story. Goodman and Bacon are also strong as temperamentally opposite authority figures, and Simmons’ dry sense of humor is a welcome reprieve from the tension. Speaking of tension, Yang, Wolff and Melikidze are all phenomenal during an extended and painfully nerve-wracking carjacking sequence. Khandi Alexander also turns up for one scene as an interrogator who grills the equally fierce wife of one of the bombers (played by Melissa Benoist).

The film wonderfully dramatizes the way everyone from the Special Agent in Charge to the techies poring over grainy surveillance footage hoping to catch any miniscule clue pitches in. The movie concludes with David “Big Papi” Ortiz’s awesome speech rallying the city. In other words, Patriots Day serves as a grim but ultimately uplifting tribute to both the weary heroism of law enforcement and the city of Boston.

Interview With Ice Cube For Fist Fight The Orphan Killer