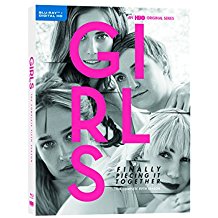 “I don’t want to be in this relationship anymore, and I don’t know how to get out.”

A TV show’s fifth season is around the time it starts to feel like you have to see things through to the bitter end. I mean, it seems downright irresponsible to ditch a series after five years of investing in its characters’ lives, no matter how flawed and frustrating they are. And there’s no doubt the self-absorbed millennials on HBO’s Girls are among the most flawed and frustrating people on TV; so I was delighted to find that the series produced one of its strongest seasons as it nears its conclusion.

“Oh, Hannah wants to do something rude, disruptive, and inappropriate. What a twist!”

The end of season 4 left several plotlines up in the air, so it’s not surprising to learn that the start of the fifth season makes a bit of a time jump and reveals some radical changes. The titular Girls — Hannah (star/creator Lena Dunham), Marnie (Allison Williams), Jessa (Jemima Kirke), and Shoshanna (Zosia Mamet) — convene in upstate New York for Marnie’s wedding to doltish musical partner Desi (Ebon Moss-Bachrach). To the surprise of absolutely no one, the wedding day ends up being a series of disasters.

Elsewhere, Shoshanna is living and working in Japan, although we don’t really catch up with her until the third episode, which is cleverly titled, um, “Japan.” Hannah is dating nice-guy teacher Fran (Jake Lacy) despite the fact that they don’t seem to actually like each other, while Hannah’s ex, Adam (Adam Driver), initiates a forceful friendship (and more) with her best friend Jessa. And because the “boys” of Girls have increasingly gotten in on the show’s action, season 5 gives us Elijah (scene-stealer Andrew Rannells) working in the coffee shop run by curmudgeonly Ray (Alex Karpovsky) and being romanced by a suave, well-known news anchor (guest star Corey Stoll).

“I need to see how other people see me because it’s the only way that I can see myself.”

If this fifth season of Girls has a theme, it’s that even aimless, selfish young people are eventually forced to take stock of their relationships as they make the inevitable march to adulthood. So it’s fascinating to watch the Hannah/Fran car wreck; they are clearly wrong for each other, but Fran persists because he aggressively holds on to his “good guy” persona while Hannah hangs in there because everyone repeatedly tells her what a good guy Fran is. It’s no spoiler to say that Marnie quickly realizes she didn’t marry Desi for the right reasons, and Elijah is shocked to find he wants something more concrete than a fairy tale romance. (Rannells absolutely shines this season, as Elijah is freed from simply being Hannah’s quippy gay best friend.)

I know I started this review talking about the potential malaise of sticking with a show for five years. But the upside is that sort of long-term emotional investment allows for satisfying smaller moments. So season 5 also devotes a significant amount of time to a pair of characters well outside the show’s supposed age bracket: Hannah’s parents — Loreen (Becky Ann Baker) and Tad (Peter Scolari) — spend the entire season trying to figure out if they want to make their marriage work, despite the fact that Tad is now living as an openly gay man. In a show populated by fickle, impatient characters, it’s important and refreshing to hear the show make the case that there’s a certain virtue in sticking with what you’ve got.

But lest we get too touchy-feely here, this is still a comedy series that delivers plenty of laughs. In addition to the show’s hilarious jaunts to Japan (which really does seem like a place Shoshanna created with her mind), Girls takes aim at hipster coffee shops, self-help retreats, and examines the etiquette of nude selfies. The fascinating, ill-advised courtship between Adam and Jessa results in some oddball, kinky material with both Kirke and Driver at the top of their games. On the other hand, one of the standout episodes of the season (and the series) is a surprisingly the Marnie-centric Ep. 6/“The Panic in Central Park”, which reunites her with a long lost ex, Charlie (Christopher Abbot, who abruptly quit the show a few years back). It’s a romantic, meandering, surprising and sobering episode that serves as a sort of microcosm for being in your mid-20s.

This season doesn’t quite end with the sorts of cliffhangers we got a year earlier. Instead, the surprisingly low-key finale finds (some of) our characters attaining a measure of growth by acknowledging their flaws and realizing the one thing in life they can control is themselves. “I’m Hannah forever. No matter what I do, no matter whether I start a new nuclear missile crisis with my emotions, or I sit back and chill and give someone a fruit basket, I can only control the mayhem that I create around me.”

Girls: The Complete Fifth Season is presented in its original aspect ratio of 1.78:1. The 1080p image is arrived at with an AVC MPEG-4 codec at an average of 28 mbps. Girls is still one of HBO’s most surprisingly vibrant and versatile visual experiences. Yes, a bulk of the action takes place in and around urban NYC, but Marnie’s season premiere nuptials and Ep. 5/“Queen for Two Days” immediately give us a lush, earthy alternative. (We even get some pleasing sunshine once the dreaded rain clears up on Marnie’s wedding day.) Once again, this is a blemish-free, surprisingly warm visual experience that continues to be as good as it gets in terms of a contemporary straightforward presentation.

The DTS-HD Master Audio 5.1 track is once more wholly immersive without detracting from the main, dialogue-driven action. There continues to be a very clean and defined separation, with the dialogue sticking to the front and the wide variety of atmospheric city noises occupying the rear speakers. The show’s blasts of indie rock feel properly explosive and fill the entire sound field, particularly during the sequence where Shoshanna goes to a concert in Japan. Still, dialogue will always be king here, and it comes through intelligibly and flawlessly.

All of the bonus material is presented in HD. The Deleted/Extended scenes and “Inside the Episodes” segments are available on both discs with their corresponding episodes.

Deleted and Extended Scenes: (19:20) The highlights here include a funny, riff-y exchange between Elijah and Marnie’s mom (guest star Rita Wilson), along with an extended look at Shoshanna and Yoshi’s courtship. Also, Hannah’s potentially disastrous hitchhiking adventure is fleshed out more, which means more of guest star Guillermo Diaz (Scandal).

Inside the Episodes: (34:05) HBO offers these weekly, behind-the-scenes featurettes for some of its shows, and these feature Dunham dishing on each episode. (Though for the first time I can remember, we also get input from fellow cast members like Williams, Mamet, Kirke, Rannells, and more.) Dunham talks about filming in Japan and reveals that Shoshanna’s fetish club adventure is based on something that happened to her in real life. Dunham also counts “Ep. 6/ “The Panic in Central Park” (inspired by the 1971 film The Panic in Needle Park) among the things she is most proud of writing.

Girls: The Complete Fifth Season features all 10 episodes on two discs. The sixth and final season is set to kick off Feb. 12. While the show’s quality has ebbed and flowed over the years, it’s always been a fascinating watch. I’m also especially optimistic for the show’s endgame after such a terrific penultimate season.

As far as this Blu-ray release is concerned, the biggest bummer is the paltry amount of special features, at least compared to past releases. (I especially missed the funny and informative commentary tracks.) Luckily, HBO has one more shot at this: here’s hoping the home video release of the show’s last hurrah is once again loaded with bonus goodies.