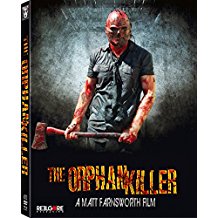 When a movie makes a bold claim such as being “a tour de force murder flick that defies classification,” it is inviting a hefty amount of preconceived criticisms prior to anyone actually viewing the film. It’s like titling a horror film This Will Scare You. Naturally, your first thought would be something along the lines of “Yeah, whatever, movie.” Needless to say, that want to criticize burns within you until you watch it. Then, with all the satisfaction in the world, you get to say “No, that wasn’t scary at all.” In the end, you are stuck with a movie that wasn’t what it promised to be, but realistically, you knew that would be the case anyway. It is a cheap marketing ploy that entices you to watch for all the wrong reasons.

On the surface, The Orphan Killer has a lot more in common with the Halloween franchise than it realizes. A homicidal maniac churns out an impressive body count in an attempt to destroy his own bloodline. The only difference is the plot of The Orphan Killer is anchored down to a Catholic orphanage, where the killer grew up. So in terms of being a film that “defies classification,” I would argue that is an objectively erroneous statement. It is a horror film, a slasher specifically, that uses a little more blood than its competition.

I applaud most, if not all, of the special effects in this film. For being a lower-budget horror film, many of the deaths did look impressive. Perhaps when considering that specifically, I might agree with the idea that it is a “tour de force murder flick.” The killer’s weapons of choice include a machete, a knife, and more brutally, barbed wire. The barbed wire is worth noting because it is used quite a bit (the killer binds his victims with it), and it looks incredibly realistic. I have not seen barbed wire utilized so memorably since Suspiria’s infamous razor wire scene. One scene in particular sees a victim attempting to escape her bindings, creating a rather disturbing sight of her skin being pulled away from her arm. Perhaps the effect was not as difficult to achieve as some of the other, more creative, deaths, but it certainly won my affection.

The weakest elements of the film are the writing choices and what I would describe as fan service. The story was very interesting, but it wasn’t told in a way that satisfied. Many of the flashbacks that told us about the killer’s motive were overlong and could have been done without dialog. In fact, the film provides enough strong visual cues within the flashbacks that the dialog seems excessive. Also, that would have eliminated the need for the murderer to speak, which really took me out of the film (a very deep booming voice, that becomes more unintelligible as the film continues). In addition, the film’s female lead, Diane Foster, seems to only be in the film to undress. With an extended bathroom scene and being in undergarments during the end of the film, she is scantily clad for at least 20 minutes of screen time. Now, I’ve never been drawn to revealing the female image in horror film, but when the disc comes with a trading card with a bikini-clad Diane Foster trading card, you have to assume that sex is a big selling point for the film. This is yet another cheap marketing ploy to entice you into purchasing a mediocre product.

So although I did enjoy myself when watching The Orphan Killer, I did not enjoy how much the movie begged me to watch it. As I write this review and think more about the distribution strategies, it just begins to feel desperate. If the box tells me how great the film is in a space typically reserved for a general synopsis, a lack of confidence in the film shines brighter than any sexy trading cards I might receive.