Posted in: Podcasts by Gino Sassani on February 6th, 2017 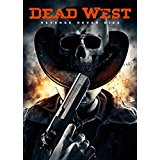 Dead West comes out on DVD from RLJ Entertainment on Tuesday the 7th. The film follows a serial killer who makes his way across the country leaving dead blonde women in his wake. Jeffrey Arrington plays Tony. Tony’s sister is the first victim of the Lady Killer. He sets out to inflict some frontier justice of his own. I had the chance to talk with him about the movie last week. He has some interesting insights into the character and the film. Now you can check out what he had to say. Bang it here to listen in on my chat with Jeffrey Arrington.

Gino Sassani is a member of the Southeastern Film Critic's Association (SEFCA). He is a film and television critic based in Tampa, Florida. He's also the Senior Editor here at Upcomingdiscs. Gino started reviewing films in the early 1990's as a segment of his local television show Focus. He's an award-winning recording artist for Omega Records. Gino is currently working on his 8th album Merchants & Mercenaries. Gino took over Upcomingdiscs Dec 1, 2008. He works out of a home theater he calls The Reel World. Favorite films: The Godfather, The Godfather Part II, The Body Snatcher (Val Lewton film with Karloff and Lugosi, not the pod people film), Unforgiven, Gladiator, The Lion King, Jaws, Son Of Frankenstein, The Good, The Bad And The Ugly, and Monsters, Inc.
Story Of God: Season 1 Justice League Dark (Blu-ray)