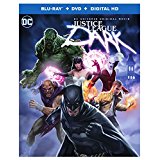 To put things mildly, Warner Bros. still has a bit of a ways to go before its stable of DC Comics superheroes catches up to Disney’s dominant Marvel Cinematic Universe. However, Warner and DC have long had the upper hand on both the small screen (Smallville, Arrow, The Flash) and with their animated, direct-to-video offerings. The latest in that latter category is Justice League Dark, which mostly sidelines DC’s best-known heroes in favor of a team of mystical outcasts led by a charming, abrasive rogue.

“The capes and tights group…useless against dark magic.”

Innocent people throughout the world — including in Metropolis and Gotham City — are committing horrible, unexplained crimes due to nightmarish visions no one else can see. Early on, we’re shown how marquee members of the Justice League (Superman, Wonder Woman, and Batman) are, well, powerless to stop this menace. However, Batman (voiced by Jason O’Mara) receives a mysterious message that prompts him to seek outside help from an unlikely source: smart-ass occult detective John Constantine (Matt Ryan).

To find Constantine, Batman enlists the help of fetching magician Zatanna (Camilla Luddington) and wisecracking poltergeist Deadman (Nicholas Turturro), who lead the Dark Knight to Constatine’s House of Mystery. The investigation eventually reveals a centuries-old source of this dark magic: a sinister sorcerer named Destiny, who created something called the Dreamstone. Originally, Destiny was defeated by Knight of Camelot Jason Blood (Ray Chase), who was eternally cursed to live as rhyming antihero Etrigan the Demon for his trouble. In the present day, Blood/Etrigan is an associate of Constantine’s. Can he and the rest of this hastily assembled motley crew — which also gets an assist from antisocial, Green-obsessed Swamp Thing (Roger Cross) — defeat this nightmarish threat again?

Justice League Dark is based on a superhero team that made its DC Comics debut in 2011, but the storyline for this film is an original creation. The director is Jay Oliva, whose DC Animation work includes the two-part The Dark Knight Returns and Batman: Assault on Arkham. So even though it feels strange to have Batman play such a passive role — his job here is basically to stand off to the side and furrow his brow at all the magical hijinks between occasionally pitching in — it’s not exactly a surprise to find that the Caped Crusader gets a good amount of screen time.

The star of the show, however, is Constantine. Ryan played the rumpled, sarcastic exorcist on NBC’s short-lived, well-liked, live-action adaptation of Constantine, and you can tell the actor relished re-visiting the part, even in cartoon form. (Ryan has also popped up on Arrow.) I actually wish Justice League Dark had been even more Constantine-centric, but I understand the movie had some heavy-lifting to do in terms of reacquainting us with characters like Zatanna (her considerable magical prowess thankfully supersedes her past romance with Constantine in terms of importance here) and Deadman (whose origin we see in a brief flashback).

Justice League Dark is rated-R, and it’s mostly for thematic reasons we don’t usually associate with the colorful and jaunty superhero stories Marvel has popularized at multiplexes. The violence here isn’t too graphic — even though a bit of blood is spilled — and the language isn’t too harsh at all. The worst we see here is a demonic decapitation and some brief, effectively disturbing looks at what the Dreamstone causes people to do.

Although the action occasionally gets bogged down with exposition and backstory, this is a promising introduction to a new superhero squad.

Justice League Dark is presented in an aspect ratio of 1.78:1. The 1080p image is arrived at with an AVC MPEG-4 codec at an average of 17 mbps. While there are no glaring blemishes, the relatively low bitrate here makes me wonder how much more dazzling this presentation could have been. The palette, as you can imagine for any story featuring Batman, is dark and features muted colors. (Swamp Thing is an appropriately sickly green.) Black levels are deep with strong separation, but there are also plenty of satisfying instances of saturated colors. (Including Deadman’s red costume and any sequence where magic is wielded.) While the overall image features some sharp detail, it doesn’t quite leap off the screen. I imagine much of that is by design, considering the comic book source material, and it works for this particular title.

The movie has a sleek, 76-minute running time, so it’s no shocker to find the DTS-HD Master Audio 5.1 track is constantly busy. Whenever spells or fists start to fly, the sound neatly originates from the center (speaker) of the action before dynamically fanning out to the other channels. Those rear speakers also offer terrific, understated support to Robert J. Kral’s score. Dialogue is crystal clear at all times, and the subs even manage to make their presence felt (for example, when a building is being torn apart).

All of the bonus material is presented in HD. The nifty Limited Edition Gift Set comes with a cool Constantine figurine.

Sneak Peek: Teen Titans — The Judas Contract: (11:41) This featurette offers a first look at DC’s upcoming animated offering. We get storyboard/comics panels combined with voiceover from the film, along with plenty of background on the story that includes Terra, Deathstroke, and Dick Grayson trying on a new identity.

The Story of Swamp Thing: (18:02) Co-creator Len Wein is one of the DC Comics heavy-hitters who discusses the history of the iconic character. (He came up with the idea during subway commutes.) Definitely a must-watch for fans of the character; this also covers Alan Moore’s landmark run with Swamp Thing.

Justice League Dark 2016 N.Y. Comic-Con Panel: (26:41) Among the panelists are director Jay Oliva, and actors Matt Ryan (Constantine) and Jason O’Mara (Batman). The group discusses the greater leeway they have in bringing these “freaks and monsters” to life. (As opposed to the more sacred heroes on DC’s roster.)

Sneak Peek: Justice League — Doom: (10:17) Just like with the Judas Contract sneak peek, this featurette offers a comprehensive look at a direct-to-DVD animated film. (Doom centers on a supervillain squad and Batman’s mistrust of his Justice League teammates.) Not sure I’d call this a sneak peek, considering Doom came out in 2012.

Sneak Peek: Justice League — Gods and Monsters: (11:07) This “sneak peek” is similarly out-of-date (this title was released in 2015), but the accompanying featurette is nevertheless an interesting watch. Gods and Monsters is set in an alternate universe/”elseworld” where Batman, Wonder Woman and Batman use deadly force to uphold justice.

Marvel’s latest big-screen blockbuster was Doctor Strange, which firmly pivoted the MCU in a more mystical direction. But I actually think DC’s roster is more conducive to stories that allow its superpowered , otherworldly characters to let their freak flags fly.

Justice League Dark is the 27th direct-to-video DC film released by Warner Bros. and it represents a long overdue debut for John Constantine. Now that some of the introductions are out of the way, here’s hoping DC/Warner Bros. continues to unleash a bit of hell as it explores this corner of its universe. (And gradually weans itself off its Batman dependency.)

Interview With Jeffrey Arrington Of Dead West Tuesday Round Up: February 7, 2017