Posted in: No Huddle by Gino Sassani on February 6th, 2017 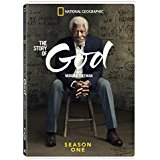 Who or what is God? Does he perform miracles here on Earth? What happens to us when we die? Is there true evil on this earth? How was the universe created? How will it all end? These are the kinds of questions for which there are no concrete answers to be found in the world around us. These are the subjects that require us to turn to our faith or belief systems. The answers might be found in our culture. You might even have had experiences that have brought you closer to the answers. This is meaning-of-life stuff, and the answer might just be 42.

Morgan Freeman joins an elite few actors who have played God in a movie. In Evan Almighty and Bruce Almighty, Freeman was the personification of God. That makes him a rather natural choice to explore the real questions surrounding faith and belief. Freeman is also one of those people who make you feel at ease. He has a naturally soothing voice and a level of wisdom in his presence that allows him to fit the bill here rather nicely as he travels the globe to get to the heart of these important mysteries.

There are six episodes that explore the topics I’ve mentioned in my introduction to this review. Each has Freeman travel to several locations where some believe they have the answers to these mysteries. The show represents all of the mainstream beliefs of Christianity, Judaism, Islam, Hinduism, and Buddhism. His travels also seek out some of the lesser-known beliefs. Each episode brings us to temples and ancient ruins that bring in the historical viewpoints of the ancient Egyptians, Romans, and Greeks. So this is as much of a history or archeology series than it is anything to do with God. The show does not neglect the scientific approach, and you might be surprised to see how often they do not come into conflict. There’s certainly a lot of interesting material here, and Freeman soaks it up rather convincingly. He’s the perfect guide for a quick trip into this world of religion and philosophy.

There are two big flaws here. The first is obvious. These are far too deep subjects to be explored in 40 minutes with any kind of depth. You will likely find a viewpoint not represented that might closely resemble your own. There just isn’t time to hit everything. Even the material that his covered can only go into so much detail. This is less of a college course on the subjects and more an introductory class. If the episodes do their jobs, you just might be inspired to explore the subjects further on your own.

The second flaw regards the reuse of footage. Obviously, the entire season run was filmed at one time. Freeman tends to visit the same cities where I’m sure he filmed all of the segments at once. That means establishing shots are pretty much recycled throughout the episodes. Now that wouldn’t be as obvious or annoying spread over six weeks. But when you binge-watch them, it becomes a little too glaring.

There’s certainly some interesting stuff here. It’s worth a quick look. The idea here isn’t to change your own belief system, but rather to augment what you already believe or think you know. In the National Geographic tradition this is more about introducing you to various cultures and attempt to put it all in some kind of perspective. The same can be said for the extras on the two-disc set. Each episode comes with a “Man On The Street” extra where the question of the episode is posed to people from 22 different nations. Each episode also comes with a bonus feature where a young rabbi, a young Christian reverend, and a young Muslim imam have a discussion in a diner about the episode’s question of the day. The extras are rounded out with a few short Q&A segments with Freeman and the show’s producers.

It’s a trip around the world in the company of Morgan Freeman. He gives us an intimate look at his own culture and the places that shaped his belief system. You likely already know what you believe. “My question is, do you know why?”

Gino Sassani is a member of the Southeastern Film Critic's Association (SEFCA). He is a film and television critic based in Tampa, Florida. He's also the Senior Editor here at Upcomingdiscs. Gino started reviewing films in the early 1990's as a segment of his local television show Focus. He's an award-winning recording artist for Omega Records. Gino is currently working on his 8th album Merchants & Mercenaries. Gino took over Upcomingdiscs Dec 1, 2008. He works out of a home theater he calls The Reel World. Favorite films: The Godfather, The Godfather Part II, The Body Snatcher (Val Lewton film with Karloff and Lugosi, not the pod people film), Unforgiven, Gladiator, The Lion King, Jaws, Son Of Frankenstein, The Good, The Bad And The Ugly, and Monsters, Inc.
Zero Days Interview With Jeffrey Arrington Of Dead West