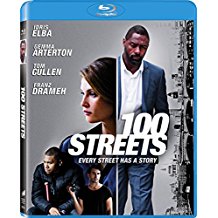 “Life’s pretty simple, you know. It’s long periods of waiting broken up by brief moments of change. That’s it…that’s all it is.”

100 Streets tells three barely-connected stories set in the same one-square-mile area of present-day London. (The neighborhoods of Chelsea and Battersea to be exact.) The stories are each quite compelling in their own right, and they’re performed by a talented group of actors. Unfortunately, the movie is occasionally bogged down by distracting, pseudo-profound soliloquies like the one at the top of this review. I appreciate the stabs at thoughtfulness and depth, but they come off as forced here and are more likely to make you roll your eyes than inspire you.

“I don’t believe in no fate. No karma, no coincidences, no conspiracy theories or any of that bulls—. S— just happens.”

Well the s— happening in 100 Streets is tidily broken into three segments. Max (Idris Elba) is a former rugby superstar with a wandering eye. He is in the midst of separating from his wife Emily (Gemma Arterton), who is now romantically involved with a photographer named Jake (Tom Cullen). The second story involves Kingsley (Franz Drameh), a small-time drug dealer who already has one strike against him. He has a way with words and strives for a better life; while carrying out some community service, Kingsley connects with kindly stage actor Terence (Ken Stott). Finally, there’s George (Charlie Creed-Miles), a taxi driver looking to adopt a baby with wife Kathy (Kierston Wareing). Unfortunately, George’s hooligan past — and a tragedy in the present — conspire to knock the couple’s dreams off course.

100 Streets is the brainchild of writer/producer Leon Butler, and the movie is based on his short “One Square Mile: London.” The director is Jim O’Hanlon, who has primarily worked in television. (Most recently on Sleepy Hollow.) It’s a good match for the material; the movie is essentially comprised of “A, B, and C” stories, just like your typical hour-long TV drama. The problem is 100 Streets miscasts and misjudges the importance and emotional impact of its three stories.

For example, you’d think the A story would be the one that featured Elba (by far the biggest star in the movie) and Arterton. And to their credit, they convincingly portray a couple on the outs who once had a very strong connection. (They accomplish this with relatively limited screen time.) Elba, in particular, is terrific as a trainwreck of a man who is having trouble adjusting to “regular” life outside the limelight. It’s an outsize arc that manages to feel relatable…at least until this segment of the film takes a wildly over-the-top and melodramatic left turn in its final act.

It also doesn’t help that the movie’s main character is actually Kingsley, who carries the B story. To be fair, I didn’t clock Kingley’s screen time or anything, but he is the first person we meet and he is the movie’s narrator. On top of that, his arc — young kid from the rough side of the tracks trying to make a better life for himself — is the most familiar. In order to leave his criminal life behind once and for all, Kingsley is forced to commit a heinous act. It’s a familiar but effective story thanks in large part to Drameh, who sells Kingsley’s overwritten monologues and mercifully isn’t required to bust out the American accent he has to use on DC’s Legends of Tomorrow. Nevertheless, Kinglsey’s segment also loses some of its punch thanks to a cruelly tragic turn of events in the end.

Coincidentally, the movie’s C story also includes a tragic death. The difference is the death in this segment occurs about halfway through the arc, so we get to see how the characters process, respond, and try to put themselves back together after such a life-shattering event. (In the other two arcs, the final-act swerves are jarring and feel more manipulative.) As a result, this turns out to be the most subtle and affecting storyline in the movie, which is bolstered by a charming, no-frills performance from Creed-Miles. Too bad George and Kathy’s story ultimately feels overshadowed by the more outrageous material in the other two stories.

100 Streets sort of reminded me of Crash, the controversial Best Picture winner that examined racial tensions in modern-day Los Angeles. That movie has detractors who rolled their eyes at the emotional manipulation in its story, but Crash had a larger, more varied cast and took bigger emotional swings. By comparison and by design, 100 Streets is tidier and less grand in its ambition (it’s right there in the title, after all) but it’s also an entertaining viewing experience.

100 Streets is presented in an aspect ratio of 2.40:1. The 1080p image is arrived at with an AVC MPEG-4 codec at an average of 31 mbps. The movie’s entire gimmick is that it takes place in one square mile of London, which doesn’t result in the sunniest, brightest, or most varied visual presentation. Flesh tones are slightly chilly, but that’s by design. Fine detail is pretty good, but generally not great; the exception is the scene where Max has a meltdown on live TV, and beads of sweat can be seen pooling on his face. Black levels are above average and display nice separation, especially during some key Kingsley scenes. Overall, this is a solid presentation that doesn’t quite dazzle.

The DTS-HD Master Audio 5.1 track is more effective than its visual counterpart in terms of immersing us in this world. Fidelity is strong here, and I was most impressed by the subtly effective way ambient street noises were deployed from all channels. (Sirens, traffic, children playing on a field, etc.) The subs only make very brief appearances early on to bolster the music in a club scene and in the final act when firearms start going off. Dialogue is clean throughout on this sneakily dynamic track.

A Look Inside 100 Streets: (14:05) This is somewhat more in-depth than your typical behind-the-scenes featurette. In addition to the usual cast and crew commentary (actors Idris Elba and Gemma Arterton, along with director Jim O’Hanlon, writer Leon Butler and others) we get input from John the Cab Driver, who appears to be an inspiration for the George character. All agree that the goal was for the story and characters to reflect the melting pot that is modern London, where the movie was shot. Presented in HD.

100 Streets is the sort of slice-of-life drama that is getting increasingly pushed out of multiplexes. (The movie barely sniffed a theatrical release despite starring the talented and extremely well-liked Elba.) It shows a side of London that could stand-in for any residential nook in a big city, yet retains its own unique charm.

Although the story is periodically hijacked by indulgent, writerly tangents, this one is worth a look if you’re in the mood for an ensemble drama about people striving to break bad habits, overcome past mistakes, and improve their lot in life.