Posted in: No Huddle by Brent Lorentson on April 6th, 2017 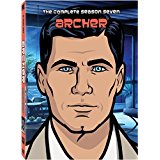 With Season 8 gearing up, Season 7 of Archer makes its way onto DVD, for many to binge and catch up before the season premiere. I have to admit this was a show I had watched perhaps a handful of episodes but I could never quite get into.  I’ll admit at times I can be a bit thick-headed when it comes to watching an animated series. After repeated requests (or demands that may or may not have been at gunpoint), I settled in and binged a season of Archer.  To my surprise, I had a blast with the show and quickly devoured more episodes which finally caught me up to Season 7.  So what trouble has the former world’s greatest secret agent, Sterling Archer (H. Jon Benjamin) gotten himself into?

The season kicks off with a nice visual reference to Sunset Boulevard as a pair of detectives discuss the significance of a body floating in the pool of a famous Hollywood actress.  Unfortunately the body belongs to none other than Sterling Archer.  The show then quickly takes us back six months earlier to where Archer and his cohorts are now starting up their own private detective agency.  It seems like the logical jump since being international spies for a terrorist group, and being drug dealers didn’t seem to work out so well.

The larger arch of the season revolves around the Hollywood starlet, Veronica Deane (Mary McDonald-Lewis) who originally comes to the agency with hopes of them recovering a disc that has been taken from her. She also crosses the agency’s path when they are hired to protect a set of jewels in the two-part episode Bel Panto as well as protecting her on the set of her new film in another two part episode Deadly Velvet.  I really enjoyed how the season had many throwback nods to classic detective films, and if this was a route they planned to keep the character on, I’d be more than on board with this.

While it may not seem like Archer has changed too much, his relationship with Lana (Aisha Tyler) seems to slowly be progressing towards something more long-term, which shouldn’t come as a big surprise considering they have a child together.  Unfortunately for Archer, it’s easier said than done for him to change his borderline alcoholic, sex addict ways.

What’s most surprising is how well these stories manage to be fleshed out and the relationships with the characters can continue to work and not feel forced.  The banter between everyone is on point, and each episode has a handful of genuine laugh out loud moments, which isn’t as easy as it may seem.  Another thing in the show’s favor is the unique animation style that reminds me of the poster and character art you can see in the Grand Theft Auto video game series.  I like the color and textures of the characters, and I’ve always appreciated the location art for the show.  I mean, for a show that runs ten episodes a year, this easily has some of my favorite animation, and then factor in the action scenes and sight gags throughout, it’s hard to not appreciate the effort that is put into each episode.  And then there is the voice cast that pops up throughout, Patton Oswalt, J.K. Simmons, Keegan-Michael Key, and more.  It’s more than just stunt voice casting; they actually pick the right actors for the part. Personally my favorite is Christian Slater playing a CIA agent named Slater.

I’m not sure where there show will be heading as it moves into the next season and beyond, but I’m more than willing to give this a shot.  It’s nice to see an animated show that is geared towards adults that doesn’t seem to talk down to its audience.  The show actually manages to sprinkle in some obscure jokes from time to time that even ask the audience to use their brain so they can be involved with the joke. Archer may not be perfect, but if you’re tired of Family Guy and enjoy a little action, Archer is a show I can’t help but recommend you give a shot, and the best thing is it’s a show you can easily pick up and not be required to have seen the previous seasons.

Brent Lorentson is a horror writer and film critic based out of Tampa, Florida. With a BA in Digital Film, he co-wrote and co-directed Scavenger Hunt. His short stories have appeared in various horror anthologies. In 2019 his short script Fertile Blood will be a part of the anthology horror film Slumber Party. He is currently working on his first novel A Dark and Secret Place set to be released in late 2019. Favorite Films: Taxi Driver, Fight Club, I Saw the Devil, The Wild Bunch, Dawn of the Dead, A Clockwork Orange, Pulp Fiction, Heathers, The Monster Squad, and High Fidelity.
Rogue One: A Star Wars Story (Blu-ray) Why Him? (UHD Blu-ray) (4K)