Posted in: Disc Reviews by Gino Sassani on April 6th, 2017 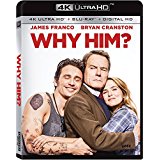 Let me tell you a few things about movie reviewers. We’re the kind of people who love watching movies. We spend entirely too much time doing so, and we can find some entertainment even in a bad film. We’re the kind of folks who don’t ask what’s playing when asked if we want to go to the movies. The answer is always yes. When someone applies to write for Upcomingdiscs, one of the first things I tell them is that they have to watch a movie all the way through…no matter how bad it might be. I’ve always been the kind of person who could do that. I’ve watched some stinkers in my day, and I never once left a film until the ending. Sure, there have been a couple of times I was tempted. I’ve had a few painful experiences. No film has ever put me to the test as much as Why Him? Halfway through the movie I was asking Why me? The answer is that I’m the only reviewer here capable of running UHD 4K Blu-rays. I should have known there would be a cost, and Why Him? was a steep one.

The plot is a promising one that quickly becomes so improbable that the plot value is completely lost in a downward-spiraling parade of bad behavior. It all starts at the 55th birthday of Ned Fleming, played quite painfully by Bryan Cranston. He’s the founder of the family printing business with many loving employees who are gathered as son Scotty (Gluck) delivers a video testimonial to the patriarch. Daughter Stephanie (Deutch) is away at college but joins the event via Skype. It’s all a typical love-fest until her boyfriend Laird (Franco) shows up in the background pulling down his pants and dancing a genital gig for the shocked viewers. It’s almost Christmas, so Stephanie decides to invite the family to California to meet the previously-secret boyfriend, and things just get worse from there.

It happens that Laird runs a game app company and is super-wealthy. He spends his money on awkward paintings of various animals having sex and a Giant bison in a huge tank of its own urine. Of course, we all know that’s going to figure into some disastrous moments in the film. That it does, but not before Laird wants Ned’s blessing to marry his daughter. The intervals are filled with more F-bombs than at a Samuel Jackson convention, sex jokes that include a European toilet with no TP, and the lineup of Laird’s posse that includes a servant who sneaks up to attack him ala The Pink Panther.

The issue here is that almost nothing these people do is remotely believable even in an exaggerated comic world. There are attempts to turn this into a sweet romance between Stephanie and Laird, but it fails so miserably that I couldn’t stand to spend one more minute with these people. Because they are so ridiculous, you really couldn’t care less what happens to them. The only thing that could have remotely saved this film was a natural disaster that just took them all out. It certainly would have put Ned out of Cranston’s misery. He can’t help but hide how uncomfortable he is in this role. You can see in his eyes how bad even he knows this mess really is. It’s a waste of his established talents. I hope it was a big paycheck. It’s also a waste of talent for the likes of Cedric the Entertainer, who has been involved in too many comedies better than this.

If all you require from your humor is bad language and innuendo that’s far from subtle, you just may have a chance of getting through this one with a smile or two along the way. Raunchy can be pretty good if you do it with good characterization and a story that puts ridiculous characters in a semi-believable world. You can’t get much raunchier than the Bad Santa films, but there’s a world of difference in the entertainment values between those films and empty husks like Why Him? We got two raunchy Christmas comedies this year. That’s one too many. I’m sticking with Bad Santa 2. How about you?

Why Him?  is presented in its original aspect ratio of 1.85. The Ultra-high-definition  image is arrived at by an HEVC codec with an average bitrate of just 50 mbps. Of course you don’t really ask much from this kind of ultra-high-definition image presentation. Average works well enough to give you natural colors and some rather sharp detail. In fact, I saw more detail here than I really needed to see. Black levels are a little better than average for an HD presentation but not quite what I expect from a 4K disc.

The DTS-HD Master Audio 7.1 track is more fitting for a Blu-ray. But that’s not really anything to complain about here. This audio presentation is there to serve the dialog. Unfortunately, you’ll hear every word pretty crystal clear. The surrounds aren’t terribly aggressive, but that’s not the intent here. You’ll get a little ear candy, to be sure.

47 Minutes On The Can (6:39) Fortunately, you don’t have to watch Bryan Cranston sit on the toilet for 45 minutes, which is apparently how long he sat there for the take.

Deleted Scenes: (31:19) There are nine with an optional play-all.

I won’t say Why Him? was the worst movie I ever saw. After all, I saw Event Horizon. It runs a close second, however. Why Him? Why bother? “Game over.“

Gino Sassani is a member of the Southeastern Film Critic's Association (SEFCA). He is a film and television critic based in Tampa, Florida. He's also the Senior Editor here at Upcomingdiscs. Gino started reviewing films in the early 1990's as a segment of his local television show Focus. He's an award-winning recording artist for Omega Records. Gino is currently working on his 8th album Merchants & Mercenaries. Gino took over Upcomingdiscs Dec 1, 2008. He works out of a home theater he calls The Reel World. Favorite films: The Godfather, The Godfather Part II, The Body Snatcher (Val Lewton film with Karloff and Lugosi, not the pod people film), Unforgiven, Gladiator, The Lion King, Jaws, Son Of Frankenstein, The Good, The Bad And The Ugly, and Monsters, Inc.
Archer: Season 7 Tuesday Round Up: April 11, 2017