Posted in: Disc Reviews by Gino Sassani on April 5th, 2017 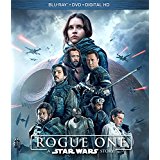 “You have to start somewhere.”

I could sense a great disturbance in the Force. I could not quite put my finger on the reason, but there appeared to be much to worry about with the debut of the first ever Star Wars film that was not one of the driving episodes in the epic story of the Skywalker family and friends. There was worry that Disney might have been pushing their luck with these sidetrack stories. The Force Awakens was very good, but should the Mouse House really be tempting fate with such “filler” material? Then there were the disturbing reports that the film required so many rewrites that as much as $5 million had been spent on the services of Tony Gilroy to provide those touch-ups. There were reports of extensive reshoots, and all of this was enough to have Star Wars fans worried. We needn’t have wasted the stress or time. Not only is Rogue One: A Star Wars Story just fine, it’s better than fine. It’s actually a very good movie.

We all know the basics of the story. It goes back to the original 1977 Star Wars movie. Princess Leia is trying to get plans to the Rebellion that expose a weakness in the Empire’s weapon of massive destruction: the Death Star. In that film we’re told that many heroes lost their lives getting those plans out. Rogue One tells the story of those rebels and how they managed to obtain the plans for the Death Star. If it hadn’t been for these guys, there wouldn’t have been much for Luke, Han, and Leia to do. You could almost call this story the foundation of the entire Star Wars saga. OK, that would be going a bit too far, but this is a compelling story with enough roots in the Star Wars mythology that it’s a story we almost think that we already knew. I’m not going to go into plot details. The fun of these films is to discover all of those wonderful things in the darkness of the theater. I will talk about some things that I think work to make this such a good film.

The first thing you’ll notice is how much this is like Star Wars, and yet how much it is not like anything you’ve seen in that universe. There is plenty of familiar iconography here. We all know the design of most of these ships, and the Death Star has become one of those designs that has been indelibly written into the history of science fiction film history. It’s no secret that Darth Vader plays a small but important part in the film and that James Earl Jones has returned to provide that majestic voice once again. There are plenty of droids, including the requisite hero droid. This guy’s not quite so cute. He’s a tough fighting droid with another one of those somewhat lovable personalities. He’s voiced by Alan Tudyk, who is no stranger to voicing androids. There is a parade of these elements throughout the film. One of the most remarkable is the return of a character and his deceased actor in a way I found as endearing as he was menacing. More on that later.

But this is also a Star Wars film I don’t believe George Lucas could have ever made. There’s a determined movement away from the space opera and toward a more gritty and grounded story. There’s more battle action here than in all of the Lucas films combined. I’m not talking about just space battles. I’m talking on-the-ground firefights. This is also a darker film than I expected. Rogue One isn’t afraid to deal with some rather real aspects of war. I’m not spoiling anything by telling you that there are characters who will not survive. Rogue One isn’t building a new generation of characters to build some alternate piece of the Star Wars universe around. This is strictly a one-shot, and there are no franchise-necessary reasons to keep any particular character around. I’m certainly not cheering that there is death, but pleased to see that when people die here it’s not just in a big John Dykstra ball of fire. There’s real emotional drama going on here the likes of which you have never seen in this franchise. Lucas wouldn’t have had this intimate emotional kind of thing going on. You will leave the theater feeling the most connected you’ve ever felt to Star Wars in a real and visceral way. Gone also is the introduction crawl of text out into space. It was announced that was going to be reserved for the “episodic” films. It’s also going to be obvious that the decision was not made early on. The opening gives us that long shot and a sudden camera shift upwards. I think there was once at least a tentative plan to retain the crawl.

There are plenty of amazing effects to be found here, but the best of these had nothing to do with spaceships or laser battles. Garth Edwards got together with the Peter Cushing estate and with their cooperation brought the actor back to life to reprise his role of Grand Moff Tarkin. It’s no real surprise that Tarkin would be an essential character here. He was pretty much in charge of the Death Star project in the 1977 film. His absence here would be noticed. I guess I expected the part to be recast as it was in Lucas’s prequel incarnation of a young Tarkin. But this is the man literally days before we see him in the first film. Edwards used a motion-capture and computer-generated technology to bring Cushing back for the part. It’s quite startling when you see and hear him. This is not some obviously faked face-replacement stunt. It’s not like the work done to allow Paul Walker to finish his last Fast And Furious role of Philip Seymour Hoffman in The Hunger Games finale. The character is not hidden in shadow or a background image. Tarkin is a huge character in the film, and you’ll swear it was Cushing the whole time. Edwards did it with care and an obvious affection for the character and more importantly the beloved late actor.

Of course the live cast is mostly made up of new actors and characters to the franchise. They carry this story without the need for any of the staple characters or actors to share their burden. Felicity Jones is just wonderful as Jyn Erso. This is yet another of the strong female roles that began with Carrie Fisher’s Leia and continued with Daisy Ryder’s incredibly strong Rey. Jyn is a bit of a mix between the two. She’s a ferocious fighter but also an inspiring figure to those around her. Forrest Whitaker is another strong presence in the film. He’s had some pretty great characters over the years, but this could well be one of his best. He’s kind of a legendary rebel fighter who has seen more than he would like to admit. The Obi Wan or Yoda character here falls to blind master of the Force, Chirrut Imwe, played with nobility by Donnie Yen. They assemble a very ragtag kind of team along the way. Tarkin is certainly one of the film’s bad guys, but we also have the extremely Oppenheimer-inspired Galen Erso, who is the weapons master designer. He’s played by Mads Mikkelsen, who literally disappears into this character. The truth is all of these actors vanish under the roles, and that makes it so easy to just immerse yourself in the story and action.

I’ve seen the film, and there is no truth to the report that the reshoots were made to deliver an anti-Trump message. Disney has a really good thing going with a franchise they paid $4 Billion to own. They’re not going to risk it all on a cheap political slam. I’m actually quite sensitive to political jabs in films. Trust me when I tell you that no such plan was hatched here.

Rogue One: A Star Wars Story in its original aspect ratio of 2.39:1. The 1080p image is arrived at with an AVC MPEG-4 codec a steady bitrate of close to 40 mbps. This high-definition image is as good as a Blu-ray can get. It was a wise choice to put all of the extras on a separate disc and allow this presentation room to breathe on its own disc. You get wonderfully sharp images that dig deep into the detail of the production design elements. Contrast is particularly impressive. Some planet orbit shots are simply beautiful. Colors pop, and white really stands out. Black levels are near perfect for an HD image. This is a show-off piece, to be sure. If this is what these guys can do with HD, I really can’t wait to see this stuff in 4K.

The DTS-HD Master Audio 7.1 is as immersive as it gets. Battles provide the surrounding zing of the iconic Star Wars blaster sounds. The subs join in to make sure that you feel as much as you hear. Dialog manages to cut through at all times. The score is rousing, particularly the remnants of John Williams’ classic moments.

The Stories: (1:08:58)  This 10-part feature pretty much covers it all. You get a handy play-all option. The segments mostly cover story, characters, production design, and the L.A. premiere of the film. There’s plenty of behind-the-scenes footage, and cast and crew pretty much all participate in the discussions.

Rogue Connections: (4:36) This offer a glimpse of some of the Easter eggs in the film that tie back to the franchise.

Gareth Edwards was such a fantastic choice to direct this film. There’s a tremendous amount of love and respect for the material with a personality unafraid to put very much of his own stamp on the end result. Few directors could have handled that balance between telling his own story and allowing it to happen in someone else’s playpen. This is a fun movie that reminds us why it is we like to take these journeys. When Disney took over Marvel and Lucasfilm, there were a lot of nervous fans who weren’t sure what was going to happen. Instead of taking Star Wars away from us as some expected, when it was Lucas who had done so years ago, they’ve given us another reason to venture “a long time ago in a galaxy far far away”.

Gino Sassani is a member of the Southeastern Film Critic's Association (SEFCA). He is a film and television critic based in Tampa, Florida. He's also the Senior Editor here at Upcomingdiscs. Gino started reviewing films in the early 1990's as a segment of his local television show Focus. He's an award-winning recording artist for Omega Records. Gino is currently working on his 8th album Merchants & Mercenaries. Gino took over Upcomingdiscs Dec 1, 2008. He works out of a home theater he calls The Reel World. Favorite films: The Godfather, The Godfather Part II, The Body Snatcher (Val Lewton film with Karloff and Lugosi, not the pod people film), Unforgiven, Gladiator, The Lion King, Jaws, Son Of Frankenstein, The Good, The Bad And The Ugly, and Monsters, Inc.
Tuesday Round Up: April 4, 2017 Archer: Season 7