The Lost City Of Z

Posted in: The Reel World by Brent Lorentson on April 21st, 2017 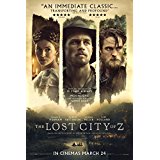 The best way to describe this film is epic; they really don’t make films like this anymore, and leave it to Amazon Studios to present us with such an ambitious film.  At one time Brad Pitt was set to star in the film, and then the lead role was offered up to Benedict Cumberbatch. Due to his conflicting schedule with Doctor Strange, he too had to drop out. Eventually Charlie Hunnam (Crimson Peak, Sons of Anarchy) was given the role, and to be honest, I don’t think there is another actor who is more suited for the role. Percy Fawcett (Hunnam) was a loyal soldier in the British army who seemed to never get the recognition that he deserved, and frankly this is something I feel Hunnam can relate to. He’s been in some great roles over the years, but somehow he’s a guy who’s been overlooked and hasn’t quite gotten the spotlight that he deserves.  Now he is poised to explore the wilds of the South American jungle in the new film from James Gray. Does the famous explorer find his lost city?  Climb aboard, and I’ll tell you all about it. I hope you’ve had all your shots and brought some bug repellent.

In 1906 Fawcett made his first journey into the Amazonian jungle with his partner Henry Costin (Robert Pattinson) for a mission that would have them mapping the borders of the country.  It’s at a time where there is a dispute over who controls the rubber that is being found in the jungle, and Fawcett has been hired by a neutral party to settle the border lines.  To continue their journey through the jungle it requires the men, along with some guides, to journey to the end of a river, a task that is believed to be impossible due to the natives and other natural threats that prowl about in the jungle.

This is a harrowing journey that is beautifully captured by Darius Khondji. The on-location photography adds a layer to this exotic adventure that easily reminded me of Apocalypse Now during the film’s many river scenes.  Filming on location just heightens the immersive nature of the film, as you can see the actors enduring their surroundings.

When Fawcett and his team reach the end of the river, we see Fawcett journey further into the jungle where he discovers pottery. This excites him, because during the journey he heard tales of a lost city that was hidden in the jungle.  The idea of villagers in the jungle having the ability to not just create pottery but actually have a city was an absurd thought at the time.  Fawcett uses his findings as his “evidence” of an advanced culture that could be older than the people of Egypt, he’s laughed at and ridiculed.  Despite how people treat him, there are still those who wish to believe, one of whom is a fellow explorer, James Murray (Angus Macfadyen) who once journeyed to Antarctica.  It’s Murray who wishes to travel with Fawcett and Costin on their new journey to find the “lost” city.

Despite this being a tale of adventure and exploring the unknown, this also follows the other love in Fawcett’s life, his wife Nina (Sienna Miller) and the rest of his family.  The toll it takes on his family is something we see affects him, but more so everyone else around him.  We get more than just a glimpse at how his obsession with the jungle is harming those he loves, and Miller does a fine job at being the strong matriarch while he’s gone.  Each journey takes Fawcett away from his family for years at a time with no guarantee on ever returning, and writer/director James Gray does a wonderful job of showing us the toll that it has taken.

If there was an issue I had with this film, it is that when the second journey begins, it’s in many ways as though the first portion of the film was wasted, because in many ways we are seeing the team encounter things all over again.  The impact is somewhat lost when we see Fawcett and the team have to encounter new members of a tribe and survive the elements.  And then we discover he yet again has to return home, just to embark on the same journey once again.  I understand that this was a life time ambition of Fawcett’s to find this fabled lost city, but would it have been so bad to just fib on the history a bit and give us one great adventure and have it mentioned beforehand about his other trips?

Don’t get me wrong, I love the first half of this film. I’d even say I love the first 2/3 of the film, but when we get to seeing Fawcett fighting in WW1 to then organizing his third expedition, it all becomes a bit tiresome. Everything feels so rushed along in the third act that everything has seemed to have lost its impact, and that’s a shame, because the film had everything going for it to become a great film.

The performances are great, and the cinematography is something everyone can marvel over on the big screen. This is definitely a film that will have a greater impact in the theater. This is hands-down the most ambitious film James Gray has done, and for what he accomplished I have to salute him, but the film unfortunately misses its mark.

Brent Lorentson is a horror writer and film critic based out of Tampa, Florida. With a BA in Digital Film, he co-wrote and co-directed Scavenger Hunt. His short stories have appeared in various horror anthologies. In 2019 his short script Fertile Blood will be a part of the anthology horror film Slumber Party. He is currently working on his first novel A Dark and Secret Place set to be released in late 2019. Favorite Films: Taxi Driver, Fight Club, I Saw the Devil, The Wild Bunch, Dawn of the Dead, A Clockwork Orange, Pulp Fiction, Heathers, The Monster Squad, and High Fidelity.
Mars (Blu-ray) Free Fire