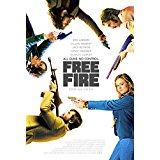 One of the hardest things to pull off in a movie is the minimalist “ship in a bottle” trick. Television shows do it often to try to save money on their seasons. Most of the time it doesn’t work. There are notable exceptions. The same is true for a movie. You have to limit your running time. You have to quickly set up a small group of characters, and you can’t waste any time getting to the point. Ben Wheatley hits all of the right buttons in Free Fire, and he’s promising to take you on a hell of a ride without ever changing locations. It looks so simple. You figure anybody can do it…and they can. But few can do it well. The entire action in the 85-minute film could have easily been a throwaway scene in another feature film. A lesser director could have done it in almost no time at all before moving on to set up their next shot. But then you’d have something… well… lesser, wouldn’t you?

The plot couldn’t be any simpler. It’s set in the 1970’s. We aren’t told this, but the styles kind of give it away. Oh, and the John Denver 8-track tape likely really gives it away. We join a group of criminals at an abandoned warehouse in the dead of the night. Introductions are made, and they proceed to close an arms deal. Things get complicated when it comes out that one of the buyers sexually assaulted the cousin of one of the sellers the night before at a bar while he was high and drunk. He got beaten, and they never expected to see each other again. Now here they are. In the blink of an eye the tense deal breaks down, and the shooting starts. It pretty much turns into the titular free fire when a third group shows up with sniper rifles. Before long everyone is shooting at everyone. It’s easy to lose count of who shoots who. The cast is crawling through the debris and trying to either get the money and get out or reach a phone that starts ringing so they can call for reinforcements. But here you fight for every inch, and it’s amazing how many times a person can get shot without actually dying. There is some dying; it just takes a lot of bullets.

The action could not be any crazier. The entire film is this firefight. It’s as if Quentin Tarantino and The Coen Siblings had a 1970’s love child. There are moments that appear directly lifted from Reservoir Dogs and Pulp Fiction, while the entire film is very much a single-location nod toward No Country For Old Men. The big difference here is that director Ben Wheatley doesn’t need the extra fountains of blood, and he can tell his story in what becomes a massive single-shot. Of course, it isn’t all one shot, but the flow and action are so smooth, and there aren’t transitions or fancy camera tricks so that your brain won’t really register the cuts as easily as a standard film. That’s the mark of incredible editing, which is likely where this film was truly perfected. Timing is everything when you are mixing up great comedic beats with some serious shooting. That’s what Free Fire has in abundance.

The cast deliver constant entertainment throughout. It would be very easy to suffer fatigue watching basically an hour-long firefight. Wheatley and co-writer Amy Jump fill the script with plenty of amusing moments that never distract from the flow of the action. The jokes are all situational or character-driven. Wheatley doesn’t have the time to set up a punchline. It’s there, and it’s gone. He trusts the cast to deliver the necessary beats, and that’s what happens here. Future Captain Marvel Brie Larson plays Justine (no last names here). She’s one of the middle”men” along with Armie Hammer’s Ord. They’re supposed to be the voices of reason, and it’s particularly great to watch exactly how Ord breaks down and handles the crises. Hammer is absolutely golden here and steals way more scenes than he should have. He looks like he’s having a good time even as he’s dodging bullets. Sam Riley plays Stevo, the junkie who gets his family into the trouble to begin with.

Of course, the film doesn’t have time to give us backgrounds, so we get some archetypes here so that we very quickly know who and what these guys are.

Wheatley brings filmmaking back to the basics. He knows when to get in and more importantly when to get out. Free Fire doesn’t waste any of your time, and it will keep you entertained brilliantly during its lean runtime. Nothing is wasted, and the film literally fires on all cylinders. It’s a satisfying drama with a bit of a predictable coda. But it’s also a refreshing comedy. Wheatley knows how to “aim with both hands”.

Gino Sassani is a member of the Southeastern Film Critic's Association (SEFCA). He is a film and television critic based in Tampa, Florida. He's also the Senior Editor here at Upcomingdiscs. Gino started reviewing films in the early 1990's as a segment of his local television show Focus. He's an award-winning recording artist for Omega Records. Gino is currently working on his 8th album Merchants & Mercenaries. Gino took over Upcomingdiscs Dec 1, 2008. He works out of a home theater he calls The Reel World. Favorite films: The Godfather, The Godfather Part II, The Body Snatcher (Val Lewton film with Karloff and Lugosi, not the pod people film), Unforgiven, Gladiator, The Lion King, Jaws, Son Of Frankenstein, The Good, The Bad And The Ugly, and Monsters, Inc.
The Lost City Of Z The Marine 5: Battleground (Blu-ray)