Posted in: Disc Reviews by Jeremy Butler on April 24th, 2017 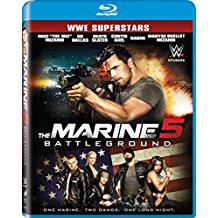 The WWE is like a dog with a bone, refusing to let this franchise as well as its other one (12 rounds) go. I will give them this: they are maintaining some consistency with Mike “The Miz” Mizanin reprising his role of Jake Carter for the third time for The Marine 5: Battleground. This time around, however, the series won’t just star one WWE superstar, but six. That’s right you read correctly, six WWE superstars have come together for this action film. With the addition of The Mix come Bo Dallas, Heath Slater, Curtis Axel, Naomi, and Maryse Ouellet Mizanin. Didn’t recognize any of those names? Don’t worry; me neither, as my days of watching wrestling ended with the end of the attitude era.

This time around, Jake Carter has returned stateside and is now working as an EMT. Working to make a difference, he finds himself drawn into a conflict with a notorious biker gang. After the murder of the president of their club, biker Alonso (Bo Dallas) is tasked to hunt down the shooter and gain revenge for the club. Accompanied by two more murders in the club (Curtis Axel and Naomi), they track the perpetrators to an underground parking garage at an amusement park. At the same time, Jake and his partner are called to the scene to find one man dead and the other critically wounded. With the bikers on the hunt, Jake must make the difficult choice, which turns out not to be a choice at all, of staying or leaving the man to his fate. I’m sure you all know what decision he made. Keeping them all alive will require all his acquired skills, especially when the bikers’ reinforcements arrive, leaving him severely outnumbered.

Despite The Miz’s boasting about knowing how to use his acquired artillery, I found his tactical ability somewhat lacking, especially when it came to shooting. Though I am a serviceman, I am not a marine, so I cannot speak fully to their training, but it seems to me when you have a limited supply of ammunition, you shouldn’t be firing it off in controlled bursts. I think I would opt for control pairs (two rounds in quick succession). Now, I understand that for the sake of the action, control pairs don’t get the blood pumping the way that going full-auto-on does, but I think control pairs would have added a bit more authenticity to the action.

That said, there are a number of things that I did like such as the hand-to-hand combat scenes, which were much more tactical than flamboyant. There is the inclusion of a few wrestling moves such as the Dead Valley Driver and Back Suplex, but they are included in such an organic way that they feel natural in the fights. I half expected to see The Miz do the Skull-Crushing Finale, but fortunately it was not included.  Also to the film’s credit, or more specifically to The Miz’s credit, he had the moves down. The way he cleared a room or moved stealthy throughout the amusement park while maintaining a 360-degree awareness of this surroundings was nicely done.

Now we talked about tactics, lets dig into the storyline, which is where the film loses steam. The common issue in these kinds of movies is the underdeveloped storyline, and this film is no exception. As at no point did I feel like I had a real sense of the characters. We are kind of just thrown in the middle of this situation with the bikers and the murder without any context. We receive a brief explanation from the lips of one of the perpetrators later towards the middle of the movie, but by that time it’s a bit of late information. In my opinion, a simple conversation between the man who did the shooting and the driver before the hit, something showing how conflicted they were about the situation, would have gone a long way towards establishing the storyline. Also, although The Miz is reprising his role, if you have not seen the other films you don’t have any sense of who Jake Carter is and what drives him, which makes bringing in newcomers extremely unlikely. Perhaps a sequence featuring flashbacks to the previous films could have aided with this. Also the Alonso character is a bit of a mystery, as we do not have a clear understanding as to why he took the murder so personally.

The Marine: Battleground is presented in the aspect ratio 1.78:1. The 1080 p image is arrived at with an AVC MPEG-4 codec at an average of 26 mbps. Overall picture quality is average at best with best detail being during close-ups and extreme close-ups. During medium shots, the image is slightly grainy on back solid walls and flesh tones. Black levels do not display good separation, which is shame, as the majority of the film takes place at night or in a dark underground parking lot. All in all, the picture is clear enough to be aware of what is happening, but there is not an overabundance of detail.

No immersive experience from the DTS-HD Master Audio 5.1 track as predominantly all the audio was transmitted from the front speakers. Additionally, there is a noticeable lack of ambient noise, which could have assist with provided that immersive feeling. Gunfire sounded authentic and not animated. To its credit, audio is well balanced with only slight instances of the soundtrack overpowering the dialog, particularly during the beginning of an action sequence.

Evening the Odds (04:38): A less than five-minute featurette focusing on the turning of the tide for the movie when Jake Carter went from hunted to hunter. It provides some real insight into that sequence and is worth a look.

Superstar Studded (04:19): Another brief featurette speaking to the drastic change of including many more WWE superstars to the film intercut with interviews with said stars voicing their excitement for the project.

It seems that the WWE is still trying to recreate the success they had with The Rock’s transition from wrestling superstar to movie ultra-star; however, I think it’s safe to say that no one will be catapulted into superstardom off the back of this film. Entertaining at times, there was still a bit lacking which in my opinion hurts the overall success of the story. If you are an avid fan of the franchise, you will likely enjoy it, but newcomers not so much.

Jeremy Butler is a film school graduate of the International Academy of Design and Technology. He is been writing for Upcomingdiscs since 2012; however, movies have played a big part of his life for much longer. Favorite genres include horror, science fiction/fantasy, and comedy. Favorite movies are V for Vendetta, Boondocks Saints, Kiss Kiss Bang Bang, and The Godfather.
Free Fire Tuesday Round Up: April 25, 2017