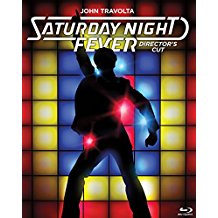 Even though I was born in 1975, I don’t remember a thing until I was about 5 years old, therefore I missed most of the “Disco” era. My dad would play music from the 70’s, but that consisted of Led Zeppelin, Queen and Black Sabbath among other bands; no disco in sight. But one faithful day in my middle school years, I did find my mother’s record and 8-track collection. There was some Barry Manilow, Julio Iglesias, and something called the Bee-Gees. I wouldn’t say anything crazy like it turned my life around, but after listening, I clearly understood. I clearly understood that my mother was crazy and I was much better off listening to Whole Lotta Love. Anyway, we have a movie to review, let’s continue with Saturday Night Fever.

A train whistle calls in the distance as we overlook the Verrazano Bridge. A tune to the name of Staying Alive chimes in. Tony Manero (played by John Travolta) walks down the street in his red shoes; perfectly in time to the music swinging a paint can. He checks out a few girls, orders a couple of slices of pizza and then makes his way to the paint & hardware store. Apparently, he works there for Mr. Fusco (played by Sam Coppola).

After swindling a little old lady out of three dollars (which incidentally is played by Travolta’s mother, Helen), Tony listens to a few life lessons from Mr. Fusco before proceeding home. There we meet Tony’s mother (played by Julie Bovasso), father (played by Val Bisoglio) and even his sister, Linda (played by Lisa Peluso). Meanwhile, Tony is upstairs in his black underwear (yes I’m a wee bit uncomfortable right now) getting his hair ready with his SuperPro Hair Dryer. Apparently, it’s time for a little Night Fever.

Tony gets dressed and heads on down to dinner with his family which is ended with a good ole fashioned slap fest. Tony later meets up with his friends and then goes down to the 2001 Odyssey, a dance club. Being quite popular at this club, Tony dances with many of the women including Annette (played by Donna Pescow) and Doreen (played by Denny Dillon). After a few numbers, the Latin music kicks in and Tony quickly exits the floor to rejoin his buddies.

Suddenly, Tony sees a girl who is lighting up the dance floor with her amazing moves. We later learn that this woman’s name is Stephanie Mangano (played by Karen Lynn Gorney). There is a dance contest on the horizon and while Tony initially picks his partner as Annette, he can’t wonder if there is more to life including a better partner. Is it only a matter of time before these two meet up again on the dance floor?

The story revolves around the friendship/partnership/romance between Tony and Stephanie but hardly anybody remembers that. Most people remember the dancing, Tony walking down the street to Staying Alive, or perhaps John Travolta in his black underwear (they say therapy works wonders). They forget the finer details of the movie including the fact that it was nominated for an Oscar (Best Actor) or in 2010 that the film was added to the National Film Registry or that it had a sequel (well somethings are best forgotten).

This is the 40th anniversary of the legendary film and with that comes a Director’s Cut which adds over 3 minutes of film length. Among the added footage, we get Tony’s father going back to work and a longer ending sequence with Tony properly getting into the apartment building (rather than just knocking on the Stephanie’s apartment door). I also (and unfortunately cannot find confirmation of this) swear that the final scene with Annette in the car lingers a lot more in the director’s cut. However, I really don’t want to time the sucker for obvious reasons.

The film is one of those that gets better with each viewing. I remember watching it in my teenage years and then again in my 20’s (which was probably the last time I saw it) and wondering what the heck I just saw both times. Now, I almost enjoy the film, at least enough to the point where I can appreciate that contrary to popular belief, there was some really good acting out of the principle leads including Mr. Travolta.

But at the end of the day, it is still a disco film that forces you to at least semi-appreciate awful music (sorry Barry Gibb) and sit through some clothes that even I would have a reservation on wearing (those shirts are magical though). One also forgets (until they watch) all of the racism, sexism, cursing and social commentary in the movie (mostly because a sanitized PG version was released to theaters two years after the original). It’s a strong film and one that probably wouldn’t exist in today’s market, at least not without a whole lot of apologizing. In fact, it’s probably a film that would have bombed in any other time period. But a classic film often involves being perfectly placed in one’s history which Saturday Night Fever clearly is.

Screen size for the film is in its OAR of 1.85:1. For the 40th Anniversary, we have a 4k restoration and the result is quite good. The picture perfectly balances light and dark scenes where they are seen as natural transitions rather than different set pieces. Part of that has to do with an actual film location but part of that has to do with the work on the master here as well. Furthermore, there was no noise or any bleeding even with the disco’s colorful palette coming into view.

Now, I’m old but I didn’t see any over abundance of DNR, scrubbing or anything indicating edge enhancement. It was extremely clean, about as good as this film will get without delving into 4k UHD territory(I could see it for the 45th anniversary) which would only make a smidgen of difference. This has excellent depth and all the better to pick out which brands sponsored this film. Thank you Trojan.

Anyway, the sound here is quite good with the Bee-Gees all over the speakers and plenty of bass for those moments where we need them. The dialog is also very clear as I had to review some of this late at night with my speakers turned down and thankfully didn’t miss a beat or any important talking moments. Surrounds are used nicely and despite the budget and limitations of a 70’s film, they are improved upon greatly here.

The audio will fill any living room on a Saturday night. The only concern would probably be some of the disco scenes where sometimes (not often), the Bee Gees come in a little too loud and it doesn’t always transition into the speaking part so cleanly. Minor, minor criticism, great audio track.

Commentary by Director John Badham: The commentary for the film is the one from the 25th Anniversary disc (he makes many mentions of 25 years ago, etc) and John shares many good stories and anecdotes. Interesting stuff like John Travolta wanting to quit after he was told about all of the dance moves he would have to perform. Thankfully he never did. In addition, the white suit was almost black and the Mafia apparently paid the movie set a little visit to ask for protection money. A worthwhile listen.

70’s Discopedia: I would call this a pop up video kinda thing. Disco lights come up at selected times during the movie and then we get a fun fact like John Travolta’s sister and mother had cameo roles in the film. (Pizza Girl and Paint Store customer) It’s rather annoying to be honest (and the fact section takes up a lot of the screen) and would best served at a party showing of the movie where everybody has already seen it a few times.

Back to Bay Ridge (9:01): This is hosted by Joseph Cali who played Joey in the movie (one of Tony’s friends). It looks like this feature was pulled from the 30th Anniversary (similar to the documentary) release. They show various places they shot such as the Pizza shop, the club (which is now an office building) and even Tony’s house which is being remodeled. A little depressing if you are old enough to remember the film.

Dance Like Travolta with John Cassese (9:50): Cassese is the Dance doctor (groovy baby) as he goes over the steps with his assistant Jennelle. Lovely, I still can’t dance.

Fever Challenge! (4:00): I guess if you have a good remote for your Blu-ray player, then you might be able to mess around with this. Follow the flashing lights in time to the music. 3 minutes and 59 seconds too long if you ask me. I was hoping this was a quiz of some sort, boy was I disappointed.

Deleted Scene: Tony & Stephanie In a Car (1:32): A deleted scene where Tony makes some moves on Stephanie in a car. It further pushes the friendship angle and that this was more plutonic than anything, at least for Stephanie. I would have liked to see the other scenes that made it to the director’s cut here as well. That way I didn’t have to guess so much.

Note: It should be mentioned that the disc contains both the Director’s Cut and the Theatrical version of the film on the same disc. It is chosen right after you hit “Play Movie”.

It has been three years since I last reviewed a title. I know that’s an awfully long time and to be truthful this was quite a juggling job when I have a two year old who demands most of my attention. I’m not saying you have seen the last of me, but I can’t promise a regular gig either. With that said, thank goodness we do have so many fine writers here at Upcomingdiscs.com and to be honest they don’t need me anyway.

With that said, this 40th anniversary disc delivers with a beautiful 4k restoration and a pretty decent director’s cut. It’s not especially meaty, but fans should find the changes at least somewhat interesting. The audio also got a bump up from previous editions and delivers more punch with every beat of Staying Alive. The special features are decent but very recycled from previous editions. And still no Travolta involvement. I know, I know. The man is still alive, but if it wasn’t for this and Grease, he wouldn’t be the star he is today. Just saying.

Fans of the movie will certainly want to dump their other editions (unless they have one with the original audio track) as this does contain Director and Theatrical cuts and the extras present from previous editions. This comes highly recommended and at a very cheap price. Suffice to say unless we see a 4k UHD disc at the 45th anniversary, this will be the disc for disco fans to get and enjoy for years to come.

Michael Durr has been reviewing movies for the better part of fifteen years now. He primarily enjoys thrillers, sci-fi, animation and even a little courtroom drama. His favorite films include Escape from New York, the Goonies and anything with Alyssa Milano. When he’s not praising Kurt Russell as the greatest actor of our time or scratching his head over a David Lynch flick, he’s spending time at home in Texas with his lovely wife, Lori and his amazing son. How they put up with him is a mystery, but even Basil Rathbone doesn’t have the time to solve that one.
Vega$: The Complete Series Tuesday Round Up: May 2, 2017