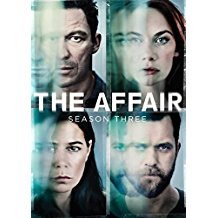 “I thought it was dull…unless it was supposed to be a satire.”

Television has been trending toward shorter, more self-contained stories. Successful shows like American Horror Story, Fargo, American Crime, and others reboot themselves every year with new characters and storylines in an attempt to offer viewers something fresh each season. The Affair seemed ready-made for that formula: each season could’ve followed different adulterous encounters in a wide variety of settings. Instead, the perspective-shifting Showtime drama is determined to chronicle the far-reaching effects of a single Long Island dalliance. So while the show brushes up against some interesting relationship dynamics, it feels like it has stretched a thin concept beyond its breaking point.

Here’s a quick catch-up in case you’ve never seen the show. The first season of The Affair chronicled the extramarital relationship between struggling novelist Noah Solloway (Dominic West) and emotionally troubled waitress Alison Bailey (Ruth Wilson). Most of the first season’s episodes depicted their budding connection from their two slightly differing points of view, and it was fun playing a game of spot the difference each week. The show’s second season found Noah and Alison struggling to build a new life together and expanded to include the viewpoints of Helen (Maura Tierney) and Cole (Joshua Jackson), their respective ex-spouses. Season 2 concluded with Noah confessing to a murder he didn’t commit, largely out of penance for his original sin of cheating on Helen.

“If you wanna be a writer, you’d better get used to people hating your work.”

The third season maintains the show’s tradition of jumping between a couple of different time periods. This time, we see the aftermath of Noah’s three-year prison stint as he begins teaching at a university and flirting with Juliette Le Gall (Irene Jacob), a French professor and one of the few people who isn’t turned off by his status as an ex-con…or by the popular novel he wrote chronicling an affair. We also get flashbacks to Noah’s time in prison, where he is taunted by sadistic guard John Gunther (Brendan Fraser, the only one having any fun around here), who has ties to Noah’s past…and may or may not be tormenting Noah in the present following his release from prison. Meanwhile, Noah’s ex-wife Helen is half-heartedly engaged in a relationship with Vik Ullah (Omar Metwally), the kind surgeon renting space in her basement. Finally, Noah’s current (estranged) wife Alison returns to Montauk to try and build a relationship with the young daughter she abandoned for six months. Alison left her daughter with Cole, who is under the impression the little girl is his; she is actually the result of a fling between Alison and Cole’s late-brother Scotty…the man Noah is in jail for murdering.

“Memory can be very faulty.”

As you can see, the series hasn’t been hurting for tragic twists and turns throughout its 32-episode run, and it seems like that is precisely the point. The show’s central characters — not to mention secondary characters like Noah and Alison’s kids — have been presented as miserable, self-centered narcissists from the start. Creators Sarah Treem and Hagai Levi previously experimented with TV drama conventions with HBO’s In Treatment. Instead of sticking with the show’s initial, provocative hook, Treem and Levi seem to be working from the thesis of “Let’s see how unhappy we can make these people’s lives.” While I wouldn’t exactly have expected Noah and Alison to cleanly sail into the sunset hand-in-hand after betraying their imperfect spouses, the result has been a show that simply isn’t that pleasurable to watch.

However, the reason I keep getting sucked into this Affair is because it manages to incorporate some interesting insight into the messy business of adult relationships in between all the misery. Season 3 emphasis the idea that men have a specific need to feel important — perhaps *more important* — in a relationship. There’s also the idea that it’s incredibly hard to let someone you love go, even if they have completely screwed you over. (Tierney’s guilt-ridden Helen, who knows the truth about the “murder” that sent Noah to jail, has become the show’s most interesting character.) On top of that, the show continues its fundamental exploration of the lies people tell (both big and small) their partners.

The Affair continued to tinker with its formula in season 3. Juliette becomes the show’s newest POV character, which leads to an amusing sequence in the finale: a conversation in French features English subtitles from Juliette’s perspective because she (and by extension “we”) understand the language, but when we see the same scene from Noah’s POV, the subtitles are gone. Ep. 9 is the first time the show has enlisted two different directors to direct an episode’s two different segments. While that episode reveals a shattering truth about Noah’s state of mind, it wasn’t quite the cataclysmic event the show’s creators were likely hoping for. (West does what he can with the material, but he’s not charismatic nor magnetic enough in this role to make us connect with Noah’s struggles.) Meanwhile, Wilson (who was the show’s initial breakout star) and Jackson seem to be starring in a separate, tense show that isn’t nearly as interesting.

The Affair: Season Three features all 10 episodes on four discs. The special features — the trio of featurettes “Storytelling with Sarah Treem,” “Playing Both Sides,” and “Dressing the Part” — can be found on Disc 4. The series has been renewed for a fourth season. Judging by the France-set finale — which heavily featured just one of the four main characters and glossed over some dramatic revelations in the previous episode — we could be in for a reboot of sorts after all. That being said, I fully expect Treem and Levi to somewhat stick with what has been (kinda) working so far.

My favorite episode of this season was probably the short-lived rekindling of Noah and Alison’s relationship in Montauk during Ep. 7: it was a callback to when the show — much like the affair between those two characters — was still new and exciting.