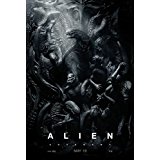 Fifteen years after the events of Prometheus, a colony ship named Covenant is bound for a remote planet with thousands of colonist and embryos when they are struck by a neutrino burst (think of it as a power space storm) which damages the ship as well as results in the death of several colonists as well as members of the crew, including the ship’s captain (James Franco). Thrust into the leadership role, Christopher Oram (Billy Crudup) finds himself overwhelmed by his new position and dissent among the crew.

Aside from that, Alien Covenant was a thrill ride, especially when the action kicked off and the colonist found themselves doing battle with a genetically engineered superior being, as stated by the only familiar face in the film. Alien fans may experience a throwback to the original films with Sigourney Weaver when they watch Katherine Waterston in action. As the primary character we get to experience this new world through her eyes, and she without question experiences the biggest arc: going from sort of a mousy character in the beginning to the badass in a very quick and organic span. The only other notable character would be Danny McBride’s Tennessee; he doesn’t’ really have the same journey as Waterston, but he grows through some things as well. McBride gives an above-average performance and is one of the most human characters of the film.

Hands down going to be the box office winner for the weekend, Alien Covenant bridges the gap between the original films and reboot quite well as well as leaves us dying to know what comes next. Though predictable in certain areas, the action sequences will keep you on the edge of your seat. I already have plans to see it again, which should tell you that it is worth seeing.

Jeremy Butler is a film school graduate of the International Academy of Design and Technology. He is been writing for Upcomingdiscs since 2012; however, movies have played a big part of his life for much longer. Favorite genres include horror, science fiction/fantasy, and comedy. Favorite movies are V for Vendetta, Boondocks Saints, Kiss Kiss Bang Bang, and The Godfather.
The Frank Sinatra Collection: The Timex Shows Vol. 1 & 2 Ice – Season 1