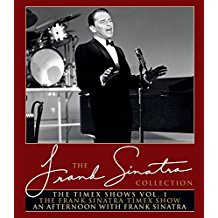 “Just give us those good old songs.”

Last year Eagle Vision released four discs that were collectively known as The Frank Sinatra Collection. But when a man’s been singing for nearly 70 years, you can’t hold a career like that on just four discs. There was always going to have to be more. The more arrived in the shape of three more DVD’s brimming with Sinatra vintage shows. But that still wasn’t going to be enough. Now there are two more discs that bring us the classic Frank Sinatra Timex specials. This was a series of four specials that aired in 1959/1960. Each had a theme that carried through the broadcast hour.

Timex sponsored the specials, and we get the Timex spots throughout the broadcast. If you’re old enough, you recall John Cameron Swayze would subject a watch to some ridiculous punishment. He’d then show you that the watch took the beating and continued to function. On these shows you’ll see watches attached to boat motor propellers and arrows fired through a pane of glass. The tagline: “Takes a licking and keeps on ticking” was iconic for decades. It also demonstrates why years later it would turn out that Timex might have been the perfect sponsor for Old Blue Eyes. Like the watches, Frank’s career certainly took its share of licks. It also lasted through seven decades, and Francis Albert himself would continue to sport that voice of silk even through the nearly 70 years of heavy smoking and drinking. No question that Frank Sinatra took a beating and kept on singing.

These shows all featured plenty of guests and actually allowed less time for Frank himself. There are more solo numbers here and more variety than you found on the previous releases. They are all in black & white and sadly not in the best video condition. Many of the elaborate sets and lighting effects are lost in this translation. The age just doesn’t allow for anything better. At least the audio is much better with only minimal hiss that, once again, is an inevitable result of age. All of the shows feature the orchestration and arrangements of Nelson Riddle. Unfortunately, because of the variety show format the orchestra doesn’t get in the picture much at all during these four specials.

The first of the specials aired on ABC October 19, 1959. Guests for the night were Dean Martin, Mitzi Gaynor, Bing Crosby, and a surprise visit by Jimmy Durante, who joins the act in the finale as Frank and his gang are throwing out Durante imitations in a satiric salute. The big draw here was also a rather historic one. Much of the special puts the trio of Sinatra, Martin, and Crosby together. There’s some very entertaining banter here as each both gives and takes sharp shots from the others. They also acknowledge the historic moment, and you can tell that they’re also genuinely caught up in it as much as the audience between the barbs and the jokes. Frank often appeared with Dean Martin, of course. Dean was a member of the famous Rat Pack. He also would appear occasionally with Bing Crosby, particularly around the holidays. Seeing the three of them was a very rare treat indeed. It’s a magical night. My only true complaint here is that a too large number of the “bits” were medleys, and there were not as many full performances.

An Afternoon With Frank Sinatra:

This special aired on December 13, 1959. While it was close to the holiday season, there are no Christmas bits in the show. Only the Timex spots reflected the holiday timing. The guests were Peter Lawford, Hermione Gingold, The Hi-Lo’s, Juliet Prowse, and icon Ella Fitzgerald. The Hi-Lo’s were a quartet singing group and played both on their own and with Frank, who took some shots from the group about needing to be a team player to work with a group. It’s all in good fun, and Frank makes a rare mention of his work with Tommy Dorsey, which would later be the inspiration for one of the most famous scenes in The Godfather. Juliet Prowse is a dancer. The running joke was that the show was going to be performed out in the desert at Palm Springs, but a terrible rain storm forces everyone inside. The sets reflected the “intended” desert theme, and Frank would chide them about “getting a little wet”.

It’s no secret what the theme of this third special might have been. Frank surrounds himself with plenty of female dancers and some A-list female performers. The show aired on ABC Feb. 15th, 1960, appropriately the day after Valentine’s Day. The guest list is the most eclectic of the collection. You get Lena Horne, Mary Costa, Barbara Heller, Juliet Prowse, and even former First Lady Eleanor Roosevelt who sits with Frank in the finale and delivers the lyrics to High Hopes without actually singing.

This one looks more like a traditional variety show. Heller is a British comic and delivers the collection’s only stand-up bit which looks like something out of the 1920’s flapper scene. Costa is an opera singer. There are also plenty of dance routines with Prowse.

Frank Sinatra’s career took a bit of a hit with the dawn of Rock and Roll, and he had to adapt and expand into films to keep himself close to the top. He got a bit of a reprieve when Elvis went into the Army for two years in 1958. So what do we have here? The special which aired on ABC May 12, 1960 serves as a star-studded return home for Elvis by Frank and his guests. The guests were his daughter Nancy (showing off her new engagement ring), Sammy Davis, Jr., Peter Lawford, and Joey Bishop. Of course, Elvis was in the building.

The running joke this time was a human time machine made up of Nancy and two male dancers. Frank used his “machine” to give Elvis back the two years he missed in the Army. Each date led to a routine on the show. Finally Elvis himself finishes the night’s activities with a couple of solo songs and a time with Frank himself. Too bad Elvis had yet to record his version of My Way, as it would have been the perfect chance for an historic duet. The best stuff here is the banter between Frank and Joey Bishop. The low point of the collection comes with a Chipmunks spoof called Uh Oh!.

There have to be plenty of other television concerts out there, and here’s to Eagle Rock for bringing them to us in an attractive collection that keeps on growing. It’s always good to see Frank on stage. After all, “a song doesn’t sing by itself”.

Gino Sassani is a member of the Southeastern Film Critic's Association (SEFCA). He is a film and television critic based in Tampa, Florida. He's also the Senior Editor here at Upcomingdiscs. Gino started reviewing films in the early 1990's as a segment of his local television show Focus. He's an award-winning recording artist for Omega Records. Gino is currently working on his 8th album Merchants & Mercenaries. Gino took over Upcomingdiscs Dec 1, 2008. He works out of a home theater he calls The Reel World. Favorite films: The Godfather, The Godfather Part II, The Body Snatcher (Val Lewton film with Karloff and Lugosi, not the pod people film), Unforgiven, Gladiator, The Lion King, Jaws, Son Of Frankenstein, The Good, The Bad And The Ugly, and Monsters, Inc.
Get Out (Blu-ray) Alien Covenant