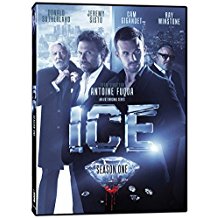 It’s not often that a show can come along that impresses me with its talent in front of and behind the camera; then when the show premieres, it is just bad for a couple of episodes and then manages to bounce back.  There are just so many options that if you don’t come out swinging, your show is going to be passed up for something else. I still feel like we’re in the Golden Age of television despite some of the best series in the past decade having already been retired from the airwaves (Breaking Bad is sorely missed despite Better Call Saul).  There is still so much out there that sometimes good stuff gets overlooked, and it’s not till DVD rolls around that you can discover a show, and that is the case for the new series Ice.

I love a good crime series, and when Ice became available as a title to check out at Upcomingdiscs, well, I felt the need to jump on it. When you have heavy hitters like Donald Sutherland and Ray Winstone headlining the cover and then throw in the vastly underrated Jeremy Sisto, I got even more excited for the possibilities. Then throw in director  Antoine Fuqua (Training Day) directing the pilot, and seriously, what can go wrong?

Oh boy, that first episode was a mess for me. To be fair, though, first episodes can be very hit-or-miss, because at this point the voice of the show hasn’t quite been defined yet, and this can take some time. Personally I wasn’t a fan of the first Boardwalk Empire episode, but that would go on to be one of my favorite shows, and that episode was directed by Martin Scorsese. But when it comes to Ice, my problem was that it seemed like it desperately wanted to be a show in the Michael Mann crime universe. There are heavy blue tones, the night photography of the city just screamed Collateral to me, but it just didn’t have that charisma. I’m a fan of Fuqua, and I just felt it didn’t have enough of his style injected into the look of this show.

So what is it all about? Well, it’s about the Green family and how they have been in the diamond trade business for some time.  It’s a family business with a strong reputation that has avoided being connected to the crime syndicate for years, but that is all about to change. Freddy Green (Sisto) is a bit of a drug addict and alcoholic, and he is involved in the homicide of a diamond smuggler.  Members of the Green family get together to help make the body disappear but in the process manage to get themselves into deeper debt with members of a diamond smuggling operation run by Lady Rah (Judith Shekoni). What’s fun with Lady Rah is that she enjoys living the lavish lifestyle and has a pack of killer hyenas, though sadly we only see them in the early episodes. Unfortunately in these early episodes Shekoni seems to play her character so over-the-top that she is hard to take seriously as a villain because the performance is so ramped-up. Thankfully by the time we reach the midpoint of the season she dials the performance down, and she becomes a lot more believable.

The biggest pitfall that the show has to overcome from the pilot is with the character Jake Green (Cam Gigandet), though rather than being over the top, this is a character that lacks anything resembling a personality.  This is a problem, since he is the star of the series, and the character is just so emotionally flat you just don’t care about him.  Freddy in more ways than one seems to show the most arc in the series as we see him struggle with guilt and his addictions amongst other things, Sisto just delivers a great performance that seems to outshine Gigandet all the more.

While the Green family goes into debt to Lady Rah and their finances continue to dwindle, the family is also under the microscope of the LAPD revolving around the investigation of the diamond smuggler and various other crimes that are occurring in the city.

As for how Winstone and Sutherland fit into the show, well, they are by far the most interesting characters thrown into the mix. The two are great villainous figures that are ruthless inside and out.  I don’t want to spoil it beyond that, but if you’re a fan of either or both, they are definitely fun to watch as they command every scene that they are in.

The show does get entertaining but does become a bit farfetched as we see these characters getting into insane over-the-top heists on a weekly basis, and it just seems that everyone who sells diamonds is really a serious member of a crime syndicate.  As the characters get into smuggling and other various illegal activities, it’s hard to believe the Green family was ever innocent, since they seem to adapt and take to a criminal lifestyle so easily.  While it’s the over-the-top crimes that keeps things lively, it’s what hurts the show’s credibility in the process and leaves me wondering how things will be handled in the following seasons.  Ice is popcorn fun, but this is a show that has potential to be more, and I’m curious to see just where the show will decide to take us.

Brent Lorentson is a horror writer and film critic based out of Tampa, Florida. With a BA in Digital Film, he co-wrote and co-directed Scavenger Hunt. His short stories have appeared in various horror anthologies. In 2019 his short script Fertile Blood will be a part of the anthology horror film Slumber Party. He is currently working on his first novel A Dark and Secret Place set to be released in late 2019. Favorite Films: Taxi Driver, Fight Club, I Saw the Devil, The Wild Bunch, Dawn of the Dead, A Clockwork Orange, Pulp Fiction, Heathers, The Monster Squad, and High Fidelity.
Alien Covenant XX (Blu-ray)