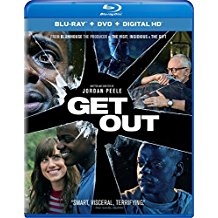 “Sometimes…if there’s too many white people, I get nervous.”

Some of the very best horror films/psychological thrillers succeed by taking a relatable source of anxiety and cranking it to 11. For example, The Exorcist can be viewed as the worst-case scenario for anyone suffering a crisis of faith, while The Shining taps into the madness of being cooped up with your family for too long. Get Out works because it uses the nerve-wracking experience of meeting your significant other’s parents for the first time as a jumping-off point to tell a subversive, insightful, and entertaining story that mashes together Guess Who’s Coming to Dinner and The Stepford Wives.

The anxiety that photographer Chris Washington (Daniel Kaluuya) feels about meeting his girlfriend Rose’s (Allison Williams) parents for the first time is magnified by the fact that Rose apparently hasn’t told them that he’s black. We meet the pair as they prepare to head to Rose’s parents secluded lake house for a weekend trip. Rose assures Chris everything will be fine, but Chris’s best friend — TSA screener Rod (Lil Rel Howery) — comically warns him about the danger he’s about to face.

Rose’s parents are doctors who mess with people’s heads — neurosurgeon Dean (Bradley Whitford) and hypnotherapist Missy (Catherine Keener) — but they seem like perfectly pleasant people on the surface. However, Chris immediately notices that something is wrong with this idyllic scene. The only other black people he sees on the premises — maid Georgina (Betty Gabriel) and groundskeeper Walter (Marcus Henderson) — behave in a stiff, bizarrely pacified manner. Chris’s discomfort and isolation is only magnified when Missy and Dean host a bunch of guests at the estate, one of whom brings a similarly subservient younger black man as a guest. Is Chris being completely paranoid or is there something sinister going on here?

“Black is in fashion.”

Get Out is being touted as springing “From the mind of Jordan Peele”, one half of the hilarious comedy duo Key & Peele. That Comedy Central sketch series was brilliant for a number of reasons, but many of the pair’s best skits poked fun at and subverted modern race relations. So while a horror film from comic-by-trade Peele seems completely out-of-left-field, this funny, off-the-wall, politically-conscious result shouldn’t be too much of a surprise to anyone who has enjoyed his work.

Peele (who directed and wrote the screenplay) uses the exceedingly familiar framework of horror thrillers to freshly comment on black and white issues that have been examined for decades. For instance, Dean realizes that his palatial home and all-black staff make him seem like a plantation owner. And the idea that young black men are being targeted — and touted as being stronger, more athletic and cooler than anyone in Rose’s parents’ orbit — cleverly speaks to the concept of cultural appropriation.

The best part is all of that stuff is in the subtext. Get Out doesn’t whack you over the head the way last year’s Birth of a Nation did; this movie is content to nail (and gently mock) the way some well-meaning white people try to flaunt their racial tolerance by talking about how much they supported Obama. It’s also an effective, creative psychological thriller in its own right. The movie begins with a brief, chilling cold open featuring a young black man (Lakeith Stanfield) running into the dark side of the suburbs. And the sequences where Chris is hypnotized — supposedly so he can quite smoking — are particularly dark and nightmarish.

Kaluuya (probably best known for the excellent “Fifteen Million Merits” episode of Black Mirror) makes for a low-key, compelling hero. A lot of the performance is reactionary, and Peele serves the character well by giving him legitimate psychological baggage…and not making him the typical Horror Movie Dummy. That being said, the movie is pretty much stolen by Howery. (Think of a chunkier, less-grating Kevin Hart.) His loyal character is basically the only person in this horror movie who realizes he’s in a horror movie. Meanwhile, Williams does a good job being properly annoyed by her overbearing parents. At first, I thought Whitford and (especially) Keener might have been tipping their creepiness a little too early, but it soon became evident that Peele designed a movie didn’t hinge on any one big twist/revelation.

Get Out is presented in an aspect ratio of 2.40:1. The 1080p image is arrived at with an AVC MPEG-4 codec at an average of 32 mbps. Black levels — which are especially crucial for any horror/thriller — are both rich and inky, particularly whenever we venture into the Sunken Place. There is also pinpoint separation on display during scenes where Chris is simply wandering around the Armitage house at night. That being said, there are also impressively vibrant moments of light and brightness, most notably during the fancy get-together at the opulent Armitage estate. Fine detail is extraordinary throughout, but most notable during close-ups of Chris’s face as involuntary tears stream down his cheek. A lot has been made of the movie’s massive box office despite its relatively meager budget, but there is absolutely nothing cheap about the visual presentation on this Universal Blu-ray release.

The DTS-HD Master Audio 5.1 track almost equals the exemplary visual presentation. This is a dynamic track that hints at danger around every corner — the early cry of a wounded deer in the forest — without resorting to cheap, head-pounding jump scares. Instead, the subs are used strategically and effectively; for example, they are used to punctuate Chris’s descent into the otherworldly Sunken Place. Michael Abels’ score also gets a nice lift from this potent, expertly-balanced track.

Alternate Ending (with Optional Commentary by writer/director Jordan Peele): (3:39) This is the darker, more pessimistic conclusion that most people would probably expect the first time they watch Get Out. Peele talks about coming up with the original ending shortly after the election of President Barack Obama, when many people declared that racism was dead. (The filmmaker calls it the “post-racial lie.”) However, he ultimately settled on the more optimistic ending when he realized Americans were generally more “woke” in terms of racial issues.

Deleted Scenes (with Optional Commentary by writer/director Jordan Peele): (23:03) There are five deleted/extended scenes, and then there are six alternate versions of Rod’s reunion with Chris. The intriguing deleted scenes include a glimpse into Rose’s past and Peele talking about cutting a shot of a skeletal deer in the Sunken Place that had been featured in the movie’s trailers. (Peele admits he lobbied against including that shot in the trailer, since it was a shameless way of trying to hook horror fans.) The alternate takes with Rod are all pretty funny and worth a watch. (Not surprisingly, the comic character works in a Trump-related dig into one of them.) Features a Play All option.

Unveiling the Horror of Get Out: (8:50) This behind-the-scenes look at the movie includes input from Peele, producer Jason Blum, and various cast members. The filmmakers lean into the Stepford Wives/Rosemary’s Baby comparisons (horror thrillers that had a lot going on beneath the surface), and talk about the similarity between constructing a joke and constructing a fright (once the subject turned to allowing Peele to get this movie made). This featurette includes spoilers, so definitely don’t watch this until after you’ve seen the film.

Q&A Discussion with Jordan Peele and the Cast: (5:28) The filmmaker is joined by Daniel Kaluuya, Allison Williams, and Lil Rel Howery for a discussion moderated by Chance the Rapper. (Wait, what?!) As you can tell from the run time, this merely includes the highlights from this Q&A session and I would’ve preferred to have access to the whole thing. The mood here is upbeat, even as Peele points out how racism and paranoia go hand-in-hand.

Feature Commentary: Peele goes solo on this track, which makes sense since Get Out is his baby. The filmmaker mixes an encyclopedic knowledge of pop culture (the creepy, suburban opening scene is a nod to Halloween) with thoughtful, personal social commentary (relaying what it feels like to be the token black person in a large group of white people). Peele also mixes in production details from the 23-day shoot, even admitting to some rookie directorial mistakes (wasting almost half a day getting coverage that he instinctively knew he wouldn’t need.) Absolutely worth a listen…but only after you’ve seen the film.

Get Out simultaneously leans into some of the genre’s more ridiculous jump scares while bringing a funny and smart perspective to a type of film that too often lacks humor and intelligence. In other words, this movie is no joke and it’s not hard to see why it became the surprise box office sensation of the year. Repeat viewings of this film reveal the multiple layers of this timely thriller, so I believe it will play especially well on Blu-ray. I am absolutely looking forward to seeing what else Peele has up his sleeve.