Posted in: Disc Reviews by Brent Lorentson on May 25th, 2017 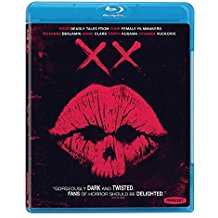 While I’m not usually a fan of gimmicks involved in trying to get my attention to see a movie, I’ll happily take an anthology of a found-footage film, simply because the odds of me finding something I like in the anthology are greater. VHS 2 is personally my favorite anthology film out there; even though it suffers from having to be a found-footage anthology, it at least delivers several unique perspectives and stories. I find it hard to believe a horror fan out there can’t enjoy the film. With XX the anthology presents us with a unique proposition when it comes to horror, four tales that are all crafted and presented by women.  A rather unintentional taboo notion when you consider horror has been a boys’ club for many years, but we are in a new era, and with this anthology this is the business card that is here to show us what they got.

I’m a little sad to see that the Soska sisters (American Mary) didn’t have a part in this, simply because they seem to be on the front lines of the women-in-horror movement, but nevertheless the entrants in XX are respectable heavy-hitters.

“The Box” is the first short tale that is thrown at us.  It keeps things simple as it follows the events that occur after a young boy and his mother have a brief encounter with a man on a subway. This leads to the young boy deciding he no longer wishes to eat, and we see the toll it takes on him and the rest of the family as the days tick by and he still refuses to eat.  Jovanka Vuckovic helms this film, and she does a serviceable job, but the film simply lacked the punch I was hoping for. Even with its ending, I was left wanting more.  This wasn’t a very reassuring way to kick off the anthology, unfortunately.

“The Birthday Party” is next up and goes for a more black-humor approach as a woman prepares her daughter’s birthday party only to discover that her husband is dead. The mother doesn’t want to spoil her daughter’s big day, so she does all she can to postpone the inevitable discovery of the dead parent. Mary (Melanie Lynskey) does a great job as the mother; she’s one of those performers I always wondered why she never had a bigger career since her start in Heavenly Creatures back in 1994.

“Don’t Fall” is definitely the most traditional of the horror tales presented here and is a fun little trip.  After a group of friends discover some unique pictographs on a wall while hiking in a secret location, come nightfall they encounter something that is as old as the dawn of man. Roxanne Benjamin does a great job at showing what this anthology set out to do. I’d love to see what she can do with a bigger budget. She nails this little creature feature so well that I wouldn’t mind seeing this story perhaps fleshed out more and redone as a full-length film.

“Her Only Living Son” is the short that closes out the anthology and is directed by Karyn Kusama (The Invitation) who is arguably the most established of the filmmakers here. She’s got a lot of buzz with The Invitation. I was a little let down by that film, but I could definitely see she was a talent to keep an eye on.  This entry into the anthology is a great slice of indy horror. Rather than go into the plot with this one, I’ll simply say it discusses the question of what do you do when you discover your child is something more, and possibly something evil. What Kusama accomplishes in such a short amount of time is simply incredible, and this is the story that definitely has the strongest punch.

There are some animated sequences by Sofia Carrillo that play out between the films; I’m guessing this was simply cushion to fill out the runtime.  While the stop-motion animation looks cool and trippy, it works as a device to introduce us to the stories as the animation takes us through a creepy dollhouse.

XX is the start of something that could be great. I’d like to see this continue with new filmmakers stepping behind the camera and telling their blood-soaked tales.  While the start feels almost like an improved student film, the last two films are solid entries into the horror canon.

XX is presented in the aspect ratio 2.39:1. The 1080p image is arrived at with an AVC MPEG-4 codec at an average of 24 mbps.  Each of the shorts presents its own style, which seems to improve over the course of the film. “The Box” has a crisper image but is flat and just lacks any real depth, while “The Birthday Party” seems to suffer from a little oversaturation. “Don’t Fall” manages to have the quality that has a range from dealing with harsh desert locations during the day, to the same locations at night. There is plenty of detail captured, but I wasn’t all that impressed with the look of the blood. “Her Only Living Son” is a short that thrives on atmosphere in the back half of the story; it has a cool creepy look that reminded me of some Italian horror films with the color palette.

The DTS HD-Master Audio 5.1 track is also a mixed bag on the release. “The Box” has the most ear-piercing annoying effect as the boy drags his fork around his plate; it has the effect of nails to a chalkboard and like his parents, I understand why they snap. “Don’t Fall” and “Her Only Living Son” use their sound mixes very well to evoke a different set of emotions. The sound design for the last short is creepy and gut-wrenching with certain effects that we see off camera.

Making of “The Box”: (14:39) While this is about the making of the short, we also get insight on how the anthology came together.

XX Set Visit in 360: BTS look at “The Birthday Party”: (1:41) Here we have some footage that shoots around the set while they are setting up a scene for the short film.

“Don’t Fall” Stunts & Special F/X: (4:49)  A mix of footage and photographs that show what went into making the shorts’ horror effects and how a character can climb around the side of a rock cliff.

BTS of “Her Only Living Son”: (3:22) Footage from the making of the short with music playing over it.  A good look at what life is like on a film set.

Interview with Directors Jovaanka Vuckovic & Karyn Kusama: (7:37) The women are paired up together to talk about the anthology and their work.  Really wish this was a segment with all the women together in a round table discussion or had them all together for a commentary.

Interview with Directors Roxanne Benjamin & Annie Clark: (5:05) Another pairing of the directors discussing the project.

Interview with Sofia Carrillo: (6:46) Here she gets to discuss her background and her inspiration for her animation pieces in the film.

Seeing so many women come together like this on such a unique project is something I hope we get to see more of down the road.  The mix of all these voices and talents only furthers my hope for the longevity of horror.  For horror fans I’d say this is required viewing; for the more casual fans, I’d say give this a shot if you want to stay out of the heat and are looking for some fun campfire tales for the evening.

Brent Lorentson is a horror writer and film critic based out of Tampa, Florida. With a BA in Digital Film, he co-wrote and co-directed Scavenger Hunt. His short stories have appeared in various horror anthologies. In 2019 his short script Fertile Blood will be a part of the anthology horror film Slumber Party. He is currently working on his first novel A Dark and Secret Place set to be released in late 2019. Favorite Films: Taxi Driver, Fight Club, I Saw the Devil, The Wild Bunch, Dawn of the Dead, A Clockwork Orange, Pulp Fiction, Heathers, The Monster Squad, and High Fidelity.
Ice – Season 1 Baywatch