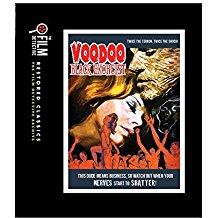 Voodoo Black Exorcist (Vudú sangriento), is a bizarre choice to distribute once more in high definition. Some of the imagery in the film is most certainly impressive; however, it doesn’t quite make up for the poor dubbing, editing, and nonsensical story. The film is about ninety minutes long, and realistically, it only demanded my attention for about ten of those minutes before I sank into boredom. Perhaps my greatest disappointment was that it wasn’t really a movie I could have fun with: it was not laughably bad. So where I would normally put some effort into poking fun, I ended up remaining abnormally critical of this old horror film.

Voodoo Priest Guedé Nibo (Aldo Sambrell), is revived accidentally on a cruise ship. As he wanders the ship in the shadows, he is haunted by images of his past: the killers of his lover, the ritual that got him mummified in the first place. Soon he becomes enthralled with the beautiful Sylvia (Eva León) who is the spitting image of his deceased lover, Kenya (Eva León in black face). Nibo continues his path of destruction and, oddly enough, persuasion, to finally reunite with his late lover.

That synopsis is a tad generous. Yes, all that does happen, but it is intercut with Dambhalla, the exotic dancer that plays with fire and these tremendously bizarre flashbacks of Nibo’s origin story. Fortunately, both the dancer and the origin story are the most interesting aspects of the film. Considering that the actress who played Dambhalla, Tanyeka Stadler, has only one acting credit to her name, I will assume that she was a dancer specifically hired for this film. While I don’t know very much about dancing, the way in which she performed stunts with ignited batons that was very fun to watch. Next, the origin story of Nibo is some of the best cinematography in the film. It is implied that he was caught with the woman of another man, and that is why she was killed and he was mummified, but I only realized that through a second viewing. During these first ten minutes, the camera is moving creatively, the set pieces are interesting, and the editing is timely and tasteful. The next eighty minutes of the film, however, take no creative leaps whatsoever; it just starts to look like every horror film you have ever seen.

While the visual creativity slowed its pace after the beginning of the film, the writing took a nosedive into nonsense. As I mentioned before, the script implies that Nibo’s origin story involves him stealing the woman of another man. It took me two screenings to understand that fully because there was no dialog in this opening segment. Once I did understand it, I was very impressed with the subtlety of the story. However, once we flash-forward to the cruise ship, the film feels like it is split in two: run-of-the-mill voodoo zombie movie and 50’s science fiction. Basically, Nibo kills for revenge. As the film progresses, he fluctuates between grunting like a zombie, or taunting his victims with his super-intellect that literally develops out of nowhere. Then, suddenly, he knows English well enough to explain how voodoo works to the scientists aboard the ship. What makes this progression frustrating is that I don’t think the filmmakers knew what they wanted Nibo to be, so they just had him fill every role. This creates a rift between the amazing ten-minute sequence with no dialog and the rest of the film, which is unsatisfying.

Overall, the restoration looks fantastic. You can find clips of the film online, and the difference in quality is most certainly night and day. Aside from that, it is hard to enjoy this film. From an awful repetitive soundtrack to crew members being very obviously visible in certain scenes, Voodoo Black Exorcist is a rather difficult viewing. If by chance you do add this to your collection, the first ten minutes is worth the watch, but you are on your own from there.