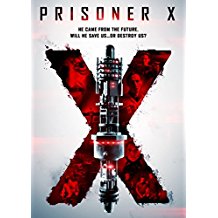 “Time-traveling terrorist, what’s scary about that?”

I’d say there is a lot scary about that. Fortunately, the character that said it was being sarcastic. Can you imagine, how do you battle an enemy that already knows what is going to happen? Prisoner X is a psychological thriller, which attempts to solve this question when a terrorist from the future and the Central Intelligence Agency’s top agent match wits to prevent a dystopian future.

Subtly is this film’s greatest strength I’d have to say, as majorities of the scenes are confined to the setting of the covert government facility. This allows the audience to focus on the psychological aspect between the interrogator and the captive; however, there the excellent storytelling it becomes difficult to determine which is which.  A great deal of credit goes to both Romano Orzari, who is the titular Prisoner X or Ramiro as he prefers to be called, a time-traveling terrorist who is captured and remanded to a black site after being discovered with weapons-grade uranium. As expected his interrogation is of the enhanced variety, where he displays an extraordinary tolerance for pain as well as genetic and technological anomalies that do not exists at present.  Further proving his worth, the prisoner provides knowledge of future events. In his debrief, he alludes that he is not alone and that the future is a wasteland and that he is a member of a fanatic group that has travel back to change the future. But is he trying to change the future for the better or the worse?

Going back to the psychological aspect, it was thoroughly enjoyable to watch the power struggle as both sides assert their dominance over the other, whether it be physically or mentally means. Orzari and Nolden have a great rapport, which drives the plot forward.  Though the plot twist towards the conclusion of the film is very predictable, it is still is enjoyable to watch as Michelle Nolden perfectly explains that paranoia is the greatest weapon of all. This statement grounds the story in reality, which is ironic given that premise is based around a time-traveling terrorist, but the reality of this monologue will have you saying, “Wow that is really true.”

As previously stated, Romano Orzari and Michelle Nolden’s performances and dynamic give the film life, but another character also plays a pivotal role in the success of this project as well: Damon Runyan as Fischer, Ramiro’s original interrogator. Runyan is an actor that I recognized from other television projects such as Nikita or Covert Affairs, usually in a guest-starring role. Even in those brief appearances, he leaves an impression and Prisoner X is no exception as he manages to remain relevant to the overall film, despite occupying less screen time than any other character. For me he embodied the everyman, someone who is looking to do some good while struggling to overcome his own personal demons. The conclusion of the film, while slightly predictable, provides an adequate resolution to the story, and satisfactory catharsis, which is readable on the main character’s face.

If you psychological thrillers, you are bound to enjoy Prisoner X, which I found thought provoking and engaging. Coupled with the above board performances from the cast, the film is a worthwhile experience that I encourage people to seek.

Jeremy Butler is a film school graduate of the International Academy of Design and Technology. He is been writing for Upcomingdiscs since 2012; however, movies have played a big part of his life for much longer. Favorite genres include horror, science fiction/fantasy, and comedy. Favorite movies are V for Vendetta, Boondocks Saints, Kiss Kiss Bang Bang, and The Godfather.
Bambi: Anniversary Edition (Blu-ray) Live at The Isle of Wight Festival 2004 (Blu-ray) (2CD)