The Candy Factory has been churning out the sweets of late. You must have noticed the many reviews we’ve had for the studios recent output. One of those films is the horror movie Wichita by first-time filmmakers Matthew D. Ward and Justyn Ah Chong. It’s a claustrophobic thriller that combines a bit of cinema verite with serial killer character study. I had a chance to talk to the two filmmakers, and they were eager to share their experiences on the film. While the audio is a bit rough (cell phone conference call) it’s worth a listen, to be sure. 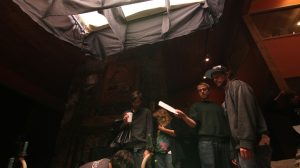 Gino Sassani is a member of the Southeastern Film Critic's Association (SEFCA). He is a film and television critic based in Tampa, Florida. He's also the Senior Editor here at Upcomingdiscs. Gino started reviewing films in the early 1990's as a segment of his local television show Focus. He's an award-winning recording artist for Omega Records. Gino is currently working on his 8th album Merchants & Mercenaries. Gino took over Upcomingdiscs Dec 1, 2008. He works out of a home theater he calls The Reel World. Favorite films: The Godfather, The Godfather Part II, The Body Snatcher (Val Lewton film with Karloff and Lugosi, not the pod people film), Unforgiven, Gladiator, The Lion King, Jaws, Son Of Frankenstein, The Good, The Bad And The Ugly, and Monsters, Inc.
The Belko Experiment (Blu-ray) Money