Posted in: Disc Reviews by Brent Lorentson on July 5th, 2017 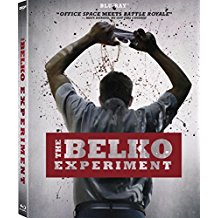 When a film like The Belko Experiment comes along there is a part of me that wonders, how far off is the film from reality? Films like Death Race 2000, The Running Man, The Purge, and Battle Royale have all flirted with the idea of the government using murder as a form of entertainment while also using it as a way to control the public. You look at the violence in the world and how numb we’ve all seemed to have gotten towards violence in the news and our favorite TV shows. I can’t help but wonder, would it be so crazy to see murder on our television screens?  Looking back at history and the gladiator times, there was murder for entertainment, where families would cheer on the bloodshed and carnage. So when I look at film like The Belko Experiment, it’s something that frightens me, more so than any creature feature Hollywood can concoct. After all, how well do we really know how governments around the world function? Perhaps a film like this wouldn’t become a reality in the states, but in places like North Korea or Russia or even South America, is it really out of the question for a game like this to go on?  In a building with no windows in the middle of nowhere, is it a crime if no one is around to hear the screams? James Gunn (Guardians of the Galaxy) pens a script that takes a harsh look at what people will do to survive under the harshest conditions, and at the helm we have Greg McLean (Wolf Creek) directing the action.  Are you ready to take part in the experiment?

In Bogota, Columbia, Mike (John Gallagher Jr.) is heading into work. He works for Belko Industries which has an office building just outside of the city. On this day, it’s evident that it is not like any other normal day at the office.  All the locals at the office have been sent home for the day due to a security threat to the building.  All that remain at the office are its 80 American employees that are all led by Barry Norris (Tony Goldwyn). We spend a little time getting to know the employees, Wendell (John C. McGinley) who seems to have an innocent crush or is possibly stalking Adria (Leandra Florez) who is Mike’s girlfriend. There is the new girl at the office, Melonie (Dany Wilkins) and there are also a few familiar faces like Michael Rooker, who plays a maintenance worker in the building, and Sean Gunn, who is the paranoid pot smoker Marty.  As you watch the film, there are plenty of faces that look familiar, and that is one of the immediate impressive things about the film: how great the cast is. Sometimes you don’t need A-listers to be a hit; you just need to fill it with the right talent. What works with the casting as well is how believable everyone is in the part. This is one of the first times in a while where an ensemble cast was put together and I could believe everyone fit the part.  Whether you’ve worked in an office environment or just in a business with a variety of personalities, right from the get go you can identify with this group, and that is what is so crucial here, because when tough decisions come up and people are about to die, the decisions matter, and several of the kills and darker moments in the film are a punch to the gut.

When the building goes on lockdown and the employees in the building are told they need to kill two employees before time runs out, the panic and unease is real.  Is this some kind of a sick joke, or are they all really just pawns of a sick social experiment? As people resist about playing along, the members in charge of the experiment set off several mini-explosives that have been planted in all of the employees as an incentive to play along or have their heads explode. Battle Royale had something similar to this, but to be honest, using these little implants seems a more practical and non-cumbersome choice for this film.  It’s when Mike attempts to remove his implant that everyone seems to understand the gravity of the situation and realize there is no place to hide, that cameras are everywhere and attempting to remove the explosive will mean immediate death.  It’s with the next challenge that “the experiment” really begins to divide the employees. They are given two hours to kill thirty employees, or else sixty total employees will be killed for them, no exceptions.

This is a film that gives you time to ponder what you would do if in the same situation, if you could make the same difficult decisions. There are those who are acting out on pure instinct of self preservation, those trying to survive for loved ones, and others simply trying to find a way out.  For a while the film seems very neutral and doesn’t take sides, which to a degree I wish it kind of stayed, but there is definitely a moment where you clearly can see who is the villain and who is supposed to be the hero.

As for the violence in this, well, it definitely has some intense, gruesome moments as we see members of the office have to improvise weapons for defense. McLean doesn’t flinch with the violence and wisely picks and chooses his moments on how much we get to see. While I’m a fan of the Wolf Creek films, The Belko Experiment is definitely a step up as a filmmaker for him. This is not an easy feat he pulled off here, and the result is a bit of a modern social commentary classic.  Yeah, I said it, a classic. Granted I feel this is a film that will flounder in cult status for some time, but for McClean this is an entry on his resume that stands out. It has some touching moments, but damn, this film has a vicious bite at times, simply because it’s not afraid to reflect the decisions anyone else in the same position would make.

The Belko Experiment is presented in the aspect ratio 2.40:1.  The 1080p image is arrived at with an AVC MPEG-2 codec at an average of 30 mbps.  For most of the film it has a relatively cold and sterile look. Oftentimes the skin tones seem a bit off due to the “office lighting”. As the film ramps up into the third act and we are taken into some low light areas, the film develops a more horror-toned atmosphere. The blood and gore all looks good, and the detail is impressive at times as we can see the sweat bead and the detail into some gnarly head wounds.

The DTS- HD Master Audio 5.1 track presents a lot of fun elements here.  The feedback from the microphone before “the voice” speaks is startling, but it’s the wet impacts of random objects smashing faces that will make you grimace.  From the screams of the employees, to having a reasonable spread to define some distance to distant gunfire.  The sound mix here is done by someone who knows how to have fun with the audience.

Rules of the Game: The Secrets Behind The Belko Experiment: (9:56) Mostly this is a conversation with James Gunn discussing his motivations behind writing the film.  There are brief moments with director Greg McLean as well with some BTS footage sprinkled in.

Lee Hardcastle’s Survival Tips: (2:56) These are some awesome little claymation shorts of scenes from the film and tips to survive the experiment.

Deleted Scenes: (5:19) Nothing really remarkable here. I can understand why they didn’t make the final cut of the film.

This is a title I have been looking forward to for some time, I figure this may be the closest we’ll ever get to an American Battle Royale; while it’s not quite that and does go its own direction, the comparisons will be hard to shake…I say embrace it.  This is a fun movie that will have you rooting for characters in good ways and in bad.  James Gunn delivers a great script with well-fleshed-out characters, and director Greg McLean has delivered a film that is profound and kick-ass all at once.  This is definitely one of the underdog films of the year; check it out, because this film is destined for cult status.

Brent Lorentson is a horror writer and film critic based out of Tampa, Florida. With a BA in Digital Film, he co-wrote and co-directed Scavenger Hunt. His short stories have appeared in various horror anthologies. In 2019 his short script Fertile Blood will be a part of the anthology horror film Slumber Party. He is currently working on his first novel A Dark and Secret Place set to be released in late 2019. Favorite Films: Taxi Driver, Fight Club, I Saw the Devil, The Wild Bunch, Dawn of the Dead, A Clockwork Orange, Pulp Fiction, Heathers, The Monster Squad, and High Fidelity.
The Zookeeper’s Wife (Blu-ray) Exclusive Interview With Matthew D. Ward and Justyn Ah Chong Of Wichita