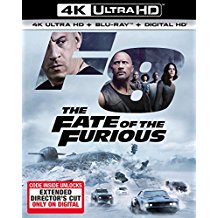 Family is everything to Dominic Toretto. He has said as much in Furious 7, “I don’t have friends, I have family.” Over the course of seven films, we have seen him undertake impossible tasks including driving a car off a plane or through a building in order to rescue or avenge a member of said family. So what would make him make him betray that very family? In The Fate of the Furious, the team will face the biggest challenge they have ever faced when they find themselves working against their very leader. The long-running film franchise continues to up the ante with the action, producing its most action-packed film to date. Every time I think that there is no way the series can top itself, they add a tank or drive off a plane. This time, they got a submarine, y’all.

When we pick up with the team, Dominic and Letty are enjoying their honeymoon in Havana, Cuba. Their bliss is cut short when Luke Hobbs (Dwayne Johnson) has to call on Dom and his team to help him recover a stolen WMD. The heist is a success, and the team is on their way back to the rendezvous when Dom throws a curveball, stealing the weapon and disappearing. This betrayal hits everyone hard, especially Letty, who finds it impossible to believe. Adding to the shock is the return of Mr. Nobody (Kurt Russell) with a junior associate (Scott Eastwood) in tow, or Lil’ Nobody as Roman and Tej like to call him. Nobody informs the team that Dom stole the weapon at the request of Cipher (Charlize Theron) and that the two are working together.

In order to stop what they are planning, the team will be forced to ally themselves with a past enemy (Jason Statham), all the while having to face the very man who made them more than a team, a family.

I’ll say this for the movie franchise, they have one of the best cast retention rates that I have ever seen (minus that two-movie period where Vin Diesel left the franchise), with even the most one-off characters returning for cameos. I mean, we are talking about a series where characters have literally come back from the dead. You just can’t write anyone off when watching these movies; all it takes is some creative writing and some of the most illogical and ridiculous explanations become plausible. Speaking of ridiculous, did I mention that they have a submarine this time around? I won’t give too many details about how that was worked into the overall storyline, but trust me, it adds to the overall excitement.

Another thing that you can never predict with these films is who will be making an appearance. I mean, never in my wildest dreams did I think that we would have the opportunity to see The Rock and Vin Diesel go toe-to-toe. Of course, for this film the big prizefight that I wanted to see would be between the Rock and Jason Statham, with their bout in the previous film being merely the preliminary round. Sadly, I must admit disappointment with how that part turned out. You will understand my disappointment when you see it for yourself. More on point about new additions to the cast is the big bad for this time around, Charlize Theron as Cipher, a world-renowned hacker who has somehow convinced Vin Diesel to betray his people. In regards to Theron’s performance, she is quite possibly the best villain for the franchise to date. She brought a cold and calculating demeanor that not only made her a formidable opponent but also made for some pretty intense scenes with Diesel. The coldness in her eyes sells the entire thing.

The overall story is very entertaining and credible, albeit with a few continuity issues. Additionally, after so many movies, reprising their roles must feel like putting on your favorite jacket; it’s effortless. Everyone has established themselves and knows their position. For example, Tyrese is the comic relief as Roman Pierce, and his dynamic with Ludacris’ Tej Parker is akin to a buddy-cop flick. I will say that filmmakers went a little too heavy-handed with the displays of Dwayne Johnson’s strength, to the point that it is going to be a bitter pill for the audience to swallow. Ironic, right? Given that this is a franchise where the characters drive through buildings and planes.

Fate Of The Furious is presented in its original aspect ratio of 2.40:1. The Ultra-high-definition  image is arrived at by an HEVC codec with an average bitrate of 50-60 mbps. This ultra-high-definition image presentation really puts you in the driver’s seat, to be sure. Much of the film is rather darkly lit and has somewhat muted colors throughout. This means that black levels have to really produce, and they do. You get nice deep blacks with rather sweet shadow definition, and more importantly there’s a lot of depth to the transfer, particularly the blacks. Don’t worry about color. There are some pretty bright elements to provide vivid contrast to all of that murky atmosphere. Flames abound with rich reds and nice brilliance. The cars offer some shiny textured colors. You’ll also find some cool texture in the ice roads of Iceland.

The DTS:X presentation defaults to a manic 7.1 track. Subs dominate this audio presentation. They provide nice room-shaking explosions but also add nice dynamic depth to everything from dialog to engine roars. Surrounds come alive with plenty of bullets in the firefights. There’s some wonderful creak and crunch from the ice. The score is quite active throughout but never steps on the important, more subtle moments of the film. Dialog comes through just fine. This is an audio presentation you will feel as much as hear.

There is an Audio Commentary with Director Gary Gray. He’s passionate to the point of manic at times and spreads a lot of love around for the cast and crew.

The Cuban Spirit: (8:04) Michele Rodriguez introduces this piece on the Cuban part of the shoot. This was the first major studio production in Cuba. Cast and crew offer their experiences with the culture and the people.

In The Family: There are four segments with no play-all.

Betraying The Family: (6:35)  A profile on the Cipher character.

Meet The Nobodys: (5:45)  A look at the Kurt Russell and Scott Eastwood characters.

The Hero Cars Of Fast: (10:22) A look at the hot cars which includes a bit of a Dodge promo/plug

The Ripsaw: (5:22) Get a closer look at the mini-tank which was provided by the Department of Defense. They tried to break it but couldn’t.

All About Stunts:  Another three parts, each a behind-the-scenes look at the stunts from three different locations:

Extended Fight Scenes: (5:03)  There are two (plane and prison fights). You get a play-all option… finally.

True to its genre and to the people involved with the films (there is even a nice little homage to the late Paul Walker), The Fate of the Furious is sure not to disappoint and to deliver the same high-octane action that the audience has come to expect from the series. There’s no question what will be the box-office winner for this week and possibly the following week. In fact, the only real question is how many variations of the original name they can come up with.

Jeremy Butler is a film school graduate of the International Academy of Design and Technology. He is been writing for Upcomingdiscs since 2012; however, movies have played a big part of his life for much longer. Favorite genres include horror, science fiction/fantasy, and comedy. Favorite movies are V for Vendetta, Boondocks Saints, Kiss Kiss Bang Bang, and The Godfather.
The Strain: Season 3 Behind the Mask — The Batman: Dead End Story