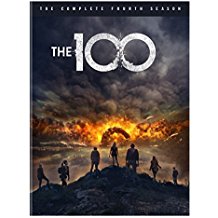 “We’ll figure something out. We always do.”

You should know the setup by now. If not, you can check out our previous reviews: The 100 Reviews. You’ll discover a series that changes quite substantially with each new season. In fact, the title itself was no longer relevant to the series after the first episode. The originally 100 was quickly whittled down in size. Then the rest of the Ark came down, and in Season 4 there are about 500 of the Ark’s inhabitants on the planet. The name will take on a new meaning by the time Season 4 ends, where it appears we may very well be back down to about 100 survivors. But that’s jumping ahead, and we have a fourth season to get you caught up on with Warner Brothers’ release of The 100 Season 4 on both DVD and Blu-ray. Warner did not send us the Blu-ray this year, so we’re going No Huddle style on you, as we only got to see the DVD release.

Season 3 left off with Clarke (Taylor) destroying The City of Light. If you’re caught up with the rest of us, you know that the victory came at a great cost and set up a ticking clock to serve as the motivation and arc of the fourth season. Clarke learns that the world’s nuclear power plants have pretty much reached their 100-year warranty and are about to release a new storm front of radiation that will pretty much kill off everything on the planet…again. It all comes crashing down in six months. She decides to keep it secret from the general population of the 13 clans. Of course, there’s another cost to pay. Now there’s a lot of cranky folks who have been ripped from The City of Light where there was no pain and no real emotion of any kind. It all comes flooding back, and Clarke finds herself defending their 13th clan status against a group of people who intend to take control of the world. They don’t know what’s coming … yet.

If there is a theme to this season, it would be the consequences of decisions. Throughout the season choices are made, and we actually have to deal with the results of each of these actions. Once the word starts to get out about the radiation storm things are pretty much set in motion after a couple of episodes of more of the political maneuvering that defined the third season. Bellamy (Morley) must make a choice when he is sent to retrieve a machine that could help them survive the storm but discovers that people are being held in bondage, including one of their own. He has to decide either to use the machine as a bomb to rescue them or leave it intact to save everyone else. The decision has ramifications not only in the work to survive the storm, but also in the rescued captives and their actions. Clarke continues to make decisions that end up haunting her and the people around her. There’s an on again/off again/one again alliance with King Roan, played by Zack McGowan. Along with his right-hand lady Echo (Teles) the fight for survival quickly becomes a competition. All of this is leading to a bunker where about 1300 people can survive the five years it will take to ride out the storm. 13 tribes? You know where this is going and how it relates back to the series title, right?

The production values remain as high as they’ve been throughout the series. The real problem comes when the show’s lead is pretty much the weak link as performances go. I’ve been over this in previous reviews, but Eliza Taylor continues to turn in one bad performance after another. I can’t quite put my finger on it, but there is no energy in her performance, and she continues to speak as if she’s reading from a script, which of course, she is; it just shouldn’t look that way. Fortunately, there continue to be some extraordinary performances to make up for her weakness.

The strongest of those performances continues to be Marie Avgeropoulos as Octavia. Fortunately for us, she takes quite the lead in this season. I think everyone involved sees what I see, and she gets to do some incredible things this season. The actress has turned this character into a complicated one with numerous conflicts and emotions. Octavia has adapted the best to life in this place. Part of the difference between her and Clarke is that Octavia appears so much better written. I think the writers have developed a bit of a fancy toward character and actress. Whatever the contributing factors might be, it’s night and day between these two actors and their characters.

Zach McGowan has to be the next best actor in his portrayal of King Roan. McGowan put in a strong showing as the ruthless Captain Vain in Black Sails, and we see some of that ruthlessness and guile in Roan as well. He’s a strong presence who pretty much steals any scene he might be in. In this case it’s not as much the writing. I don’t think he’s written well at all. The script tries to turn him into a weaker person without a lot of conviction. McGowan turns all of that on its head and can dominate with just a look.

Certainly, there are strong performances to be found in such actors as Paige Turco, Henry Ian Cusick, and Isaiah Washington. It’s no surprise that, like McGowan, each of these actors has proven themselves as strong characters in other shows. I think that works because the show itself appears to retread the same ground too often within each season, leaving these characters to often fend for themselves to shine, all the while making drastic changes to the show’s structure to start each season. Still, it often ends back with the same kinds of things happening. It can get a little tedious, but there are some good ideas here, and thankfully there are so many very good performers.

The DVD set gives us all 13 episodes on three discs. Extras include some deleted scenes and brief features (around six minutes) on production design, stunts, and a character profile on Jasper, played by Devon Bostick. Fans of the show will likely get the Blu-ray instead. That’s certainly where I would have gone given a choice. Superior image presentation gives us a much more immersive feel for the rather nice attention to detail. The DVD offers plenty of compression artifact, which doesn’t do the series justice. Getting the Blu-ray will be “one less thing to worry about”.

Gino Sassani is a member of the Southeastern Film Critic's Association (SEFCA). He is a film and television critic based in Tampa, Florida. He's also the Senior Editor here at Upcomingdiscs. Gino started reviewing films in the early 1990's as a segment of his local television show Focus. He's an award-winning recording artist for Omega Records. Gino is currently working on his 8th album Merchants & Mercenaries. Gino took over Upcomingdiscs Dec 1, 2008. He works out of a home theater he calls The Reel World. Favorite films: The Godfather, The Godfather Part II, The Body Snatcher (Val Lewton film with Karloff and Lugosi, not the pod people film), Unforgiven, Gladiator, The Lion King, Jaws, Son Of Frankenstein, The Good, The Bad And The Ugly, and Monsters, Inc.
Alive and Kicking Time-Life Brings Back The Good Ole Days