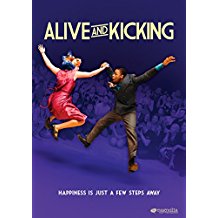 We here at UpcomingDiscs strive to provide our beloved readers with the most informative and well-thought-out reviews, regardless of the movie or TV show genre that comes flying through the door. Collectively, our awesome little staff covers a wide range of interests. But when swing dancing documentary Alive and Kicking arrived at UpcomingDiscs HQ…there was only one man for the job. The toe-tapping doc is equal parts enlightening and entertaining, whether you’re a swing dancing novice (like my wife/occasional movie-watching partner) or — like me — a guy who’s been into this stuff for the last 15 years.

“Swing dancing is the pursuit of happiness.”

A little background: I’ve been swing dancing since I was 19, which is when I decided to try out a free class at the University of Florida along with one of my college roommates. True confessions time: we may or may not have started taking the class as a potential way to meet girls. What we discovered was a small, but unique, welcoming, and passionate subculture that encouraged participation from all races, age groups, etc. (And since I know you’re curious…my college roommate ended up getting a girlfriend out of our club. I did not.)

Alive and Kicking captures the inclusiveness of the swing community while tying it to the artform’s history. Swing dancing gained prominence within the black community as a form of escape during the Great Depression prior to dying down during the more prosperous post-World War II period. That was followed decades later by a low-key and unexpected resurgence in the early 1980s before swing dancing exploded onto pop culture in a bigger way during the ‘90s thanks to a couple of movies (1993’s Swing Kids and 1996’s Swingers) and a very famous Gap commercial.

The documentary also simultaneously (and nimbly) profiles a handful of charismatic dancers, who serve as our entry point into the world swing and carry the bulk of the action here. We first meet Evita Arce, a bubbly and relentlessly enthusiastic dancer for almost 30 years who teaches swing around the world. Other standouts include Swedish adopted sisters Emelie and Rebecka DecaVita (to be clear, they weren’t adopted by the same parents…they adopted each other as sisters), along with Steve Sayer and Chanzie Roettig (a platonic duo that balances full-time jobs with dance competitions). I do wish we’d gotten a little more time with Augie Freeman, a U.S. Marine who found that swing dancing helped him overcome feelings of isolation.

First-time director Susan Glatzer establishes that communal tone early on; as more and more people retreat into their iPhone or computer screens, swing dancing functions as a social outlier that requires people to (gasp!) talk and (double gasp!!) touch each other. Glatzer focuses on Lindy Hop, but includes an amusing segment outlining some of the more outrageously-named regional styles of swing dancing. And while the focus might be on the young‘uns here, Alive and Kicking also pays homage to — and includes both newer and vintage footage of — swing dance legends like Frankie Manning, Norma Miller, and Dawn Hampton. (Manning and Hampton have each passed, so this documentary momentarily brings them back to life, so to speak.)

The swing dancing scenes in Alive and Kicking — especially the stuff involving Steve and Chanzie competing at Camp Hollywood and other contests throughout the world — are zippy and dynamic, making it pretty hard not to bop your head at least a little. (They also provided more than a couple moves and tricks for me to steal borrow next time I’m on the dance floor.) Although the bulk of the dancing we see is Lindy Hop, there is still room here for a sultry segment on blues dancing.

The only time the documentary loses a bit of steam is when it chronicles the health struggles of a couple of the featured dancers. However, even those segments serve to illustrate the sense of community in swing, since we also witness the outpouring of love and support from fellow dancers. In short, this documentary is as genuine, joyous and open-hearted as the dancers it spotlights.