Posted in: Uncategorized by Gino Sassani on July 21st, 2017 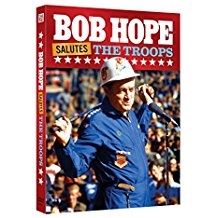 If you’re looking for a little nostalgia on DVD, you have a lot of options out there. Front and center you’ll find that Time-Life has been bringing out a lot of memories. We’ve already looked at such shows as The Wonder Years, Dean Martin Roasts, and Mama’s Family over the years. We’ve also got some insight on another classic television milestone in the coming weeks. For now we take a look at four recent releases that bring back the good old days. I’m talking about: Hee Haw: Pfft! You Was Gone, Bob Hope Salutes the Troops, The Best of Tim Conway and The Tonight Show With Johnny Carson: Johnny And Friends Steve Martin, Robin Williams and Eddie Murphy. It’s song, dance, and laughs on DVD. And away we go:

Hee Haw: Pfft! You Was Gone

You’ll get four episodes of the long-running variety show on two discs. The episodes are taken from the 1969 to 1973 period and feature the likes of Dolly Parton, Marty Robbins, George Jones, Tammy Wynette, and Merle Haggard. The show was hosted by Buck Owens and the master guitarist Roy Clark. There’s little doubt that the series was a country music knockoff of Rowan And Martin’s Laugh-In. There really wasn’t any attempt to hide it. The series featured the same kind of short jokes and non-sequitur flashes of humor. Here’s what you get:

Episode 2, which aired June 22, 1969. The episode features Merle Haggard performing Mama Tried and Roy Clark doing Yesterday When I Was Young. This is also likely why the title was used, as you get many versions of Pfft! You Was Gone in this episode. The show was just getting started, and many of the famous routines hadn’t gotten going yet.

Episode 34, which aired October 13, 1970. Marty Robbins does two numbers in this episode. You’ll get Afraid of Losing You Again and Don’t Worry ‘Bout Me. Another standout performance can be found in The Hagers performing Everything Is Beautiful. It’s the middle of Season 2 now.

Episode 70, which aired Feb 12, 1972. We jump ahead several episodes to Season 3. Dolly Parton is the guest in this episode. She performs Coat of Many Colors, and she joins guest Porter Wagoner for a duet on The Right Combination.

Episode 111, which aired November 3, 1973. Another year and another sample of another season. This time we jump over Season 4 and right into Season 5. This one is just loaded with country music classics. George Jones sings Nothing Ever Hurt Me (As Bad as Losing You). Tammy Wynette performs Kids Say the Darnedest Things. The Hagers give us their version of the Tony Orlando hit Tie a Yellow Ribbon ‘Round The Ole Oak Tree. George Jones and Tammy Wynette get together for a duet on We’re Gonna Hold On. There’s a salute to Tammy’s hometown of Itawamba, MS.

Over the years Bob Hope has made a special kind of name for himself by entertaining our troops abroad during wartime. World War II saw Hope bringing a little entertainment to the weary troops. He was particularly known for his Christmas shows. Santa came to the front lines and delivered some Hope, Bob Hope. This three-disc set brings us some of his most memorable performances with quite a bit a bonus material that has Hope looking back on those years. There is also some pretty cool footage of the World War II performances. While these shows are much later in the performer’s career, they are a snapshot of history all the same. Here’s what you get:

This USO show occurred during the first Gulf War known as Desert Shield. Hope brought with him The Pointer Sisters, Marie Osmond, Johnny Bench, Ann Jillian, and Khrystyne Haje. The show is a delightful mix of comedy and music with the highlight being Osmond singing to one of the soldiers on stage.

It was the Vietnam War, and Hope was there bringing his USO tour to the troops in Vietnam, Korea, Thailand, and on board ship at Midway. This show brings you highlights from the various shows on the tour. Hope brings along another group of friends that included Ann Margret, Linda Bennett, Rosey Grier, The Golddiggers, Les Brown, and Dick Albers. The show features a mixture of Christmas Carols like Silent Night and Jingle Bells along with other songs and comedy skits.

It’s another world tour with shows in Guam, Okinawa, Korea, Thailand, Vietnam, and The Philippines. This time the crew includes Anita Bryant, Jerry Colonna, Janis Paige, Jill St. John,  Les Brown, and Anna Maria Alberghetti. This one has more comedy bits than songs, but we get both the holiday spirit with Jingle Bells and Bryant singing You’re Nobody Till Somebody Loves You. Things got a little rough on this tour as the hotel near the stage was bombed.

This time the clips are from Japan, Korea, Guam, The Philippines, Okinawa, Formosa, and aboard ship once again. The crew includes: Anita Bryant, Jerry Colonna, Janis Paige, Lana Turner, and Les Brown. Hope gets to bossa nova with Lana Turner. A pretty even mix of comedy and music with the entire troupe and attending servicemen singing Silent Night in one of the release’s most emotional moments.

Once again we’re back in the thick of the Vietnam War with Bob Hope and his friends. But this special includes some of the most extensive globetrotting of his specials. Stops for this show include Hawaii, Wake Island, Okinawa, Thailand, Spain, Cuba, and, of course Vietnam. The performers include Vida Blue, Suzanne Charny, Jan Daley, Don Ho, Carmen Sevilla, Jill St. John, The Blue Streaks, astronaut Alan Shepard, and Les Brown.  The guests are often location specific. Of course, Don Ho joins in Hawaii. More skits than music here with another all-inclusive rendition of Silent Night.

Yeah, you saw that title before. Look, there aren’t many ways to title these Christmas performances, and so the titles get a little repetitious. It’s Vietnam War era again, and Hope visits Japan, Alaska, Korea, Thailand, Diego Garcia, the Philippines, Guam, Wake Island, and Vietnam. The performers include Rudy Cardenos, Lola Falana, Redd Foxx, Roman Gabriel, Delores Hope, Fran Jeffries, and old faithful Les Brown. It would be the 22nd Christmas season Hope has entertained the troops. The number would reach close to 50 before Hope was finished. This one includes some juggling, dance, music, and comedy. Hope and Lola Folana do up Cabaret, and Redd Foxx gives us a funny visit from Fred Sanford himself, army style. One of the soldiers gets to sing to Miss World winner Belinda Green. I’m sure that made the rest of his outfit a little green with envy.

The Best of Tim Conway

This is only a single disc, and it’s impossible to showcase The Best of Tim Conway in less that 100 discs. He’s one of the funniest comedians to have appeared on television. Of course, he got most of his attention and air-time on The Carol Burnett Show, and that’s what you get here. You get the best of four episodes of that show. These are the episodes moments that feature some of the more classic skits. These are not complete episodes of the show. One of the most famous has always been The Dentist, where he had Harvey Korman in a laughing fit. The two made a great team, so it’s no accident they appear together in much of this material.

Tim Conway was just a guest in this episode. He wouldn’t become a show regular until 1975. But he would make frequent appearances on the show. Here he was a guest with Martha Raye. Tim’s best gags include his Oldest Man working the pits for Harvey Korman, which of course is a disaster for the racer. He joins the entire cast in a huge salute to 20th Century Fox with mini-skits inside the bigger number.

This show featured Tim Conway with Pat Carroll and Karen Wyman. Tim’s funniest moment comes when he’s given a shot that was intended for a dog. He also starts the show as the Lone Ranger trying to iron out a new working relationship deal with Tonto.

Tim is guest along with famous singer Mama Cass Elliott. Tim takes over for Marlon Brando in A Streetcar Named Desire. But the highlight of this episode and release is The Dentist which I mentioned earlier. Watch Korman crack up so bad he has trouble continuing. It’s an obvious improv bit from Tim, and it’s become an iconic classic bit. That’s coming from a guy who has to look away when he’s dealing with the syringe. It’s not the original airing, but a repeat because of the bit’s popularity.

This was the final season for the show and the only episode here where Tim Conway is a regular on the show. Steve Lawrence was the guest star. The best bit here is at the end where Tim’s doing an ad for dog food.

This set comes in three discs. You get one for each of the above comedians. Of course, it carries some pretty huge sentimental value for fans of the recently deceased Robin Williams. I have to admit that I couldn’t stop thinking about what was going on in his head while he was clowning around. An obviously disturbed man, but none of that is on display here.

You actually get the full shows on these discs. Some of the advertisement breaks are also included. I actually found some of that to be the most interesting, particularly from the early Martin appearances. The Murphy shows are from the same year, but you do get to see the evolution over time of Martin particularly and also Robin Williams.

These releases are the closest thing we have to a Time Machine. The material here extends as far back as 1939 up until the early 90’s. Time-Life brings it all “back by popular demand”.

Gino Sassani is a member of the Southeastern Film Critic's Association (SEFCA). He is a film and television critic based in Tampa, Florida. He's also the Senior Editor here at Upcomingdiscs. Gino started reviewing films in the early 1990's as a segment of his local television show Focus. He's an award-winning recording artist for Omega Records. Gino is currently working on his 8th album Merchants & Mercenaries. Gino took over Upcomingdiscs Dec 1, 2008. He works out of a home theater he calls The Reel World. Favorite films: The Godfather, The Godfather Part II, The Body Snatcher (Val Lewton film with Karloff and Lugosi, not the pod people film), Unforgiven, Gladiator, The Lion King, Jaws, Son Of Frankenstein, The Good, The Bad And The Ugly, and Monsters, Inc.
The 100: Season 4 Contest: Win The Fate of the Furious On Blu-ray From Universal Studios