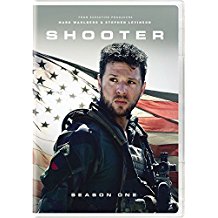 “Guns change everything, and a bullet is forever.”

This new USA Network series is based very loosely on the 2007 film staring Mark Wahlberg. The film was based on the bestseller novel Point Of Impact by the ironically named Stephen Hunter. The series started life with several events going against it. The film really didn’t make much of an impact itself. It lost money with a domestic box office total under $50M and about the same in the world-wide box office. So it wasn’t necessarily a no-brainer for a television series adaptation. That push came from the original film’s star Mark Wahlberg, who is the executive producer of the series. But that’s not the only obstacle the show had to overcome. The premiere was delayed twice, first because of the Pulse shootings in Orlando and then again after the police officer shootings in Dallas, Texas. No question the series took a long, hard road to finally make it on the air. Now that it has finally aired, Universal is putting the first season together on DVD. It’s a good chance to catch the series if you missed its eventual run on USA Network. But is it worth going through the trouble now. Yeah, the show has its moments. It’s somewhat clever and has more than its fair share of dramatic moments.

Ryan Philippe takes over the Wahlberg role of Bob Lee Swagger. His name itself is somewhat of a red herring. We all know that many political assassins have gone by unfortunate three-name monikers. The name just seems to fit the motif of John Wilkes Booth and Lee Harvey Oswald. Perhaps that was intentional. Bob Lee is a character very much like the true-life and tragic Chris Kyle, played by Bradley Cooper in Clint Eastwood’s extraordinary An American Sniper. Like Kyle, Swagger is the best sniper in the armed service. He has a record number of kills over several tours in the Middle East. He’s finally reached his limit after his friend and spotter is killed. Now he’s pretty much settled down to a quiet life with his wife Julie (VanSanten) and young daughter Mary (Kolker). He hunts in the nearby mountains and performs a little frontier justice on hunters and trappers who might be pushing the game rules just a little bit. He may be retired, but there is still that little need for action. He keeps his boathouse stocked with an arsenal of weapons as if he were planning for a war. But life is good.

That is until he’s visited by his old captain Isaac Johnson, played by Omar Epps. Johnson now works for the Secret Service and has come to recruit his old sniper buddy to help protect the president. While in country, Swagger had a rival on the other side. Throughout the conflicts they often played cat-and-mouse, each trying to take out the other much like the main characters of Enemies At The Gates. Swagger never did bag his nemesis, but Johnson is now offering him a second chance. There has been an overt threat to the life of the President, and it looks like it is his old enemy behind the plot. Johnson wants him to get inside the sniper’s head and help them stop the assassination at a public ceremony in Seattle. Swagger is reluctant at first, but them there is all this duty and honor stuff bantered about so that he takes the job, and he does the work thoroughly. He’s given a replica of the sniper’s gun, and he stakes out potential shooter’s nests and attends the event to help keep a watchful eye. But it was all a setup to kill another figure and make Swagger the scapegoat. Now he’s on video casing the scene, buying the necessary supplies, and his prints are all over the weapon. Now he must run, not knowing who he can trust and find a way to keep his family safe at the same time while he tries to figure out the truth and get proof.

The series begins to play out very much like the classic series The Fugitive. And like the later film adaptation, help comes in the form of an FBI agent who begins to see that things don’t appear to add up. Unlike the previous show and series, she gets caught pretty deeply in trying to help him prove his innocence. Each week they find a new crucial person or part of the conspiracy, and it goes very high. There’s a Russian involvement that may be a bit to close to home today with all of this Russian collusion stuff going on in politics today. Between the shootings and the current political environment, I’d say Shooter cuts a little too close to home for many, but it’s an interesting drama if you give it a chance.

Ryan Philippe is a bit of a mystery to me after watching Shooter. I suggest you give the show a little more time than just the pilot. In the pilot episode his acting is some of the worst stuff I’ve seen. I’m talking super low budget. He appears to be reading from cards and has zero presence. There are early scenes with him and Omar Epps that are painful to watch. But something happened starting in the second episode. Whatever it was that was making him so uncomfortable in those early moment appears to go away. Suddenly his performance comes alive with some purpose and passion. His dialog delivery does a complete 180, and he becomes a very compelling character. There’s a story there, and I would love to know what it is, but the difference is staggering. I’m not saying he suddenly becomes the best actor I’ve seen. Far from it. I’m saying he gets good, and fast. 10 episodes of the guy I saw in Number 1 and this would have been a painful two hours. So look beyond that first episode, and you will be rewarded.

Cynthia Addai-Robinson does a pretty solid job as FBI Agent Nadine Memphis. She’s an agent who is on the fringes of being put out. She has a big mistake in her past that hurts her own self-confidence and her credibility with her fellow agents. That makes her the perfect character to start to believe in Swagger’s innocence. She has just the right combination of determination and self-doubt that makes this a character I wish we actually saw more of.

On the bad guys’ side there are some very interesting characters working this conspiracy ring. Tom Sizemore appears to be one of the leaders and operates with a devil-may-care attitude that things will work out just because he wills it to be so. It’s actually a more subtle role than Sizemore usually takes on. Eddie McClintock is Payne, the weasel character who always messes up, but finds a way to keep himself alive and useful. It’s rather entertaining to watch him get in and out of jams. Desmond Harrington puts in one of the strongest performances as Lon Scott, who becomes a rival sniper for Swagger and an essential piece of his attempt at exoneration. He doesn’t come in until the last few episodes, but he is a great shot in the arm just when things appear to be dragging. Prison Break‘s William Fichtner missed that show’s event series and has an episode-long appearance here as Swagger’s mentor. It’s my favorite episode of the first season. Finally, Sean Cameron Michael plays the part of the Russian big bad, Krukov. You might remember him from Black Sails, and a nice political bad guy he delivers here. The South African native delivers a nice believable Russian accent.

If you are afraid to get involved out of fear you’ll invest your time and end up never getting a resolution, worry not. The season does end with a resolution of Swagger’s innocence, but not quite in the way you might expect. But you won’t be left hanging. The season finale finishes that story, only to dangle the thread that will connect to a brand new story for Season 2, which has just begun to air on USA Network. You get all 10 episodes on two discs. The only extra is a short making-of feature. I love it when you get to the end of a show’s first season and “it hasn’t even gone bad yet”.

Gino Sassani is a member of the Southeastern Film Critic's Association (SEFCA). He is a film and television critic based in Tampa, Florida. He's also the Senior Editor here at Upcomingdiscs. Gino started reviewing films in the early 1990's as a segment of his local television show Focus. He's an award-winning recording artist for Omega Records. Gino is currently working on his 8th album Merchants & Mercenaries. Gino took over Upcomingdiscs Dec 1, 2008. He works out of a home theater he calls The Reel World. Favorite films: The Godfather, The Godfather Part II, The Body Snatcher (Val Lewton film with Karloff and Lugosi, not the pod people film), Unforgiven, Gladiator, The Lion King, Jaws, Son Of Frankenstein, The Good, The Bad And The Ugly, and Monsters, Inc.
La Vie de Jean-Marie Unforgettable (Blu-ray)