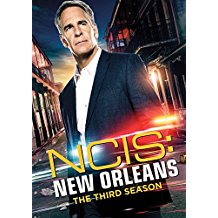 “Welcome back to New Orleans.”

The most recent member of the NCIS family enters its third season. There are some changes, but not just in the show’s cast. I have noticed a concerted effort to use the term NOLA by both the characters and various signs and symbols displayed throughout the new season. It’s a bit odd, because at one point a character chastises an outsider that the locals prefer New Orleans. Minutes later that same character uses the term NOLA. The crew now even wear lanyards that say NCIS:NOLA on them. I have not been to New Orleans post-Katrina, so I’m not up on whatever local thing might be going on with the name. I suspect there are some politicians who are using the new designation in order to help re-brand the city. Whatever’s going on, the series is apparently caught up in it. The term even shows up in episode titles.

Dwayne Pride (Bakula) is a native of New Orleans. His family has history here. His father is in prison for various fraud activities. His daughter Laurel is in college studying music, a passion she and her father share. We don’t see either of them in the third season. He’s now divorced and starting to settle in for himself. He goes way back in his defense of the city and considers protecting it as his own private responsibility. The team is a lean one compared to the other NCIS shows, but grows by one this season. Pride’s long-time friend and right-hand man is Alabama native Christopher LaSalle, played by Lucas Black. LaSalle has the old southern charm and some redneck tendencies. The team’s medical examiner is Dr. Loretta Wade, played by The Shield’s own favorite CCH Pounder. Her assistant is the geeky conspiracy nut Sebastian Lund, played by Rob Kerkovich. This season Sebastian gets a bit restless and decides he wants to be a field agent. We’ve seen the lab rat move to the field before, most notably DNA-guy Greg on the original CSI.  He’s absolutely the comedy relief on the team and usually explains too much and makes the requisite science fiction or conspiracy references that tend to annoy his colleagues. Last year the new member of the team was ATF Agent Sonja Percy, who still has a lot of the street in her. She’s small but loud. She’ll get in your face and is pretty much just learning to play well with others. Last year Daryl “Chill” Mitchell’s Patton Plume went from a recurring character to a regular. He’s a wheelchair-bound computer whiz who ups the comic relief with his boasting. You get the impression that he also goes way back with Pride. Zoe McLellan has left the show after the first two seasons, and her Agent Brody has decided to quit, we’re told. That leaves a spot open on the team, which Sebastian has his eyes on. But there is also another contender for the spot.

As the season begins, the unit is under investigation by the FBI. There is consideration that the team is too rogue and needs to be broken up. It’s a common plot point on these kinds of team shows, and you always know they won’t really be taken down. That FBI team is led by new recurring character FBI Assistant Director Raymond Isler, played with presence by Derek Webster. He’s been bouncing around many television shows, most notably a similar position in The Mentalist. Isler’s top agent is Tammy Gregorio, played with some fire by Vanessa Ferlito. She’s a New York agent with the accent and the attitude. She’s not liking New Orleans, but she’s being dangled in front of us as Brody’s replacement for half the season.

For the first time the series uses two story points to separate the season halves. The first arc is a big tie-in to the FBI team in town to investigate the NCIS team. They are also after a huge drug cartel that has imbedded agents in the New Orleans area. That’s the excuse for Agent Gregorio to remain and even work with NCIS for the first part of the season. The big target here is Javier Garcia, played by Julian Acosta. He gets too close at times to the team and even shows up as engaged to an old friend of Pride’s. As the team closes in on Garcia, they accidentally uncover a connection to Mayor Hamilton, played nicely by Steven Weber. That’s where the baton is passed, and Hamilton becomes the big fish for the second half of the season. While there are still some stand-alone episodes, this season is far more serialized than previous years in the franchise. By the last few episodes of the year, Pride ends up going rogue to bring down the man who has really been a kind of nemesis since the show began. Bakula and Weber share great chemistry, and it’s a treat to see these characters go head to head with the gloves off. The result will change the team, and perhaps the series a bit going into the next season.

There’s also another crossover with the mother show NCIS. Thankfully CBS saw fit to include both episodes here. That was not always the case, but I am always grateful when a studio allows you to see the entire story without having to buy a set you may not particularly want. The crossover begins on NCIS where Abby is convinced to join a think tank where she plans and executes a mock terrorist attack. Someone attempts to turn it real, and that leads to New Orleans where the story finishes. So you really get 25 episodes spread out on six discs with some short bonus features on the crossover episodes, character profile on Gregorio, props, video village where we meet many of the unsung crew members, and the usual half-hour season summary.

I love Scott Bakula and was a fan of both Quantum Leap and Star Trek: Enterprise. He adds that command-authority mixed with caring-father-figure here that he delivered as Captain Archer. One of the big issues, however, has to do with his New Orleans accent. He still travels in and out of it so much that it’s actually getting distracting. Early in the first season they appeared to kill the accent, but instead it is rather toned down. I suspect it really drives the New Orleans people crazy. I guess “that’s just the way we do things around here”.

Gino Sassani is a member of the Southeastern Film Critic's Association (SEFCA). He is a film and television critic based in Tampa, Florida. He's also the Senior Editor here at Upcomingdiscs. Gino started reviewing films in the early 1990's as a segment of his local television show Focus. He's an award-winning recording artist for Omega Records. Gino is currently working on his 8th album Merchants & Mercenaries. Gino took over Upcomingdiscs Dec 1, 2008. He works out of a home theater he calls The Reel World. Favorite films: The Godfather, The Godfather Part II, The Body Snatcher (Val Lewton film with Karloff and Lugosi, not the pod people film), Unforgiven, Gladiator, The Lion King, Jaws, Son Of Frankenstein, The Good, The Bad And The Ugly, and Monsters, Inc.
Tuesday Round Up: August 15, 2017 Billions: Season Two