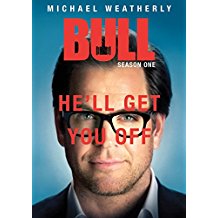 “I’m Dr. Jason Bull. I’m not a lawyer. I’m an expert in what’s called trial science. I study the jury’s behavioral patterns. I know what they’re thinking before they do. Everything my team learns gets plugged into a matrix, which allows us to assemble a shadow jury that is scary in its predictive efficiency. The verdict you get depends on me, and that’s no bull.”

When Michael Weatherly left NCIS after 13 seasons, it’s not like he didn’t have a pretty wide safety net. It should be noted that they did not kill off the character, leaving him room if his other plans didn’t quite work out the way he planned. Those other plans can be found in the new CBS drama Bull in which Weatherly plays the title character and gets his chance to see what it’s like to be number one on the call sheet. If you’re looking for a clone of the beloved Tony DiNozzo, you will likely be somewhat disappointed. Dr. Jason Bull is intentionally miles away from that character. It’s a somewhat brave move, but likely a necessary one if Weatherly is ever going to be thought of as anything but crazy Tony DiNozzo. But what about the show itself?

Dr. Bull (Weatherly) runs a trial consulting firm that charges wealthy clients a lot of money to manipulate the system to get a good verdict. He uses that money to take on cases for people who could not ordinarily afford these kinds of services. His team includes Chunk Palmer (Jackson), a gay former college football star who decided to skip the draft and enter the world of fashion. Now he helps dress clients to appeal best to a jury. Cable McCory (Attanasio) is the requisite hacker and computer techie. Benny Colon (Rodriquez) is an old friend of Bull’s and also his ex-wife’s brother. He’s the actual lawyer on the team who steps in when there isn’t a lawyer or assists with the legal angles when another lawyer is running the case. He used to be a prosecutor but was fired for not pursuing a case against a client be believed was not guilty. This makes him one of the few lawyers Bull actually likes. Danny James (Kirchner) is a former FBI agent who acts as the team’s investigator. She also offers insight on evidence. Marissa Morgan (Carr) is Bull’s partner and right-hand woman. She tends to act as his mirror and moral center.

The first half of the season suffers quickly from a terrible sameness to each episode. Most shows have a formula, but this was getting pretty monotonous. We’d start with a quick look at the crime or issue involved. Then jury selection would begin with Bull offering weird questions that were actually helping him select the best jury. There is the usual eyebrow raising by the judge and opposition, but we soon learn that Bull knows what he’s doing. He has three doctorates in human psychology. Next the team would select a “shadow” jury of people matched to the actual jurors. They would fit the same demographics, likes, histories, and attitudes toward various subjects. These people would attend the trial wearing a biometrics watch that allows the team to judge how they are reacting to the elements of the trial. On a giant screen we see each juror with a red, yellow, or green border which indicates if they are on their side or leaning one way or another. Of course, the team would go into action to fix these strays along the way.

This went on so long that there was no room for character development, and the routine was in danger of relegating the series to that cold science mode that Bull turned each trial into. Somewhere along the way the writers and showrunners must have figured out the problem, and a serious course correction happens mid-season. It starts with an attack on the team’s HQ by a woman who wants them to prove her husband didn’t commit a crime. It’s actually an overused plot device that has appeared on pretty much every crime drama I’ve seen. But here it worked well to pull the show from its rut and start to inject more drama and variety into the episodes. From here we still get the routine, but the show does a better job of mixing up the situations by adding other elements and obstacles that make for a more entertaining show. If it hadn’t made the changes, I suspect the series would not have lasted the year. It lasted as long as it did on the name value of Weatherly. Overall I’d say it was a nice job of paying attention and making the right changes.

While the series tries to put an original spin on the courtroom drama, there is little here that is brand new. Much of the Bull character reminds me of James Woods’ character in Shark. He was a rich guy who changed course and also had a replica courtroom in his house. He used to test things on mock juries and utilized many of the psychological aspects of the trade. The difference here is the technology and the exactness they claim. There the show moves more into Numbers territory with its rather cold predictability aspect. Bull is apparently based on a young Dr. Phil, who is one of the show’s creators. I don’t see it, and I suspect that link is very thin. Weatherly is both the best and worst part of the entire deal. He’s a great actor, and audiences already have a rather warm spot in their hearts for him. But he’s trying so hard to not be DiNozzo that he tends to have too much of a stoic air that doesn’t really fit actor or character well. After 13 years, I’m sure he’s still finding his feet, and I have higher hopes for a second season. I hope he finds a middle ground that can breathe more life into Bull without being a spoof of DiNozzo. Still, that’s going to be a hard expectation to break.

You get all 23 episodes on six discs with the usual CBS season summary, a look at the courtroom sets, and a feature on Weatherly. My inclination is to give him a chance here and withhold my own long-term verdict. “Innocent until proven guilty? Nobody believes that. Show me where that’s written down.”

Gino Sassani is a member of the Southeastern Film Critic's Association (SEFCA). He is a film and television critic based in Tampa, Florida. He's also the Senior Editor here at Upcomingdiscs. Gino started reviewing films in the early 1990's as a segment of his local television show Focus. He's an award-winning recording artist for Omega Records. Gino is currently working on his 8th album Merchants & Mercenaries. Gino took over Upcomingdiscs Dec 1, 2008. He works out of a home theater he calls The Reel World. Favorite films: The Godfather, The Godfather Part II, The Body Snatcher (Val Lewton film with Karloff and Lugosi, not the pod people film), Unforgiven, Gladiator, The Lion King, Jaws, Son Of Frankenstein, The Good, The Bad And The Ugly, and Monsters, Inc.
The Lion King: The Circle Of Life Edition (Blu-ray) Batman and Harley Quinn: Limited-Edition Gift Set (Blu-ray)