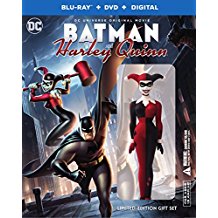 Warner Bros. still has a bit of a ways to go before its stable of DC Comics superheroes catches up to Disney’s dominant Marvel Cinematic Universe. However, Warner and DC have long had the upper hand on both the small screen (Smallville, Arrow, The Flash) and with their animated, direct-to-video offerings. Before Wonder Woman saved the day earlier this summer, one of DC’s recent big-screen highlights was the way Margot Robbie’s Harley Quinn enlivened the supervillain mash-up Suicide Squad. And while I’m fully aware that Harley’s appeal lies in being a strong, sexy, wisecracking nutjob, I wish the makers of this well-deserved small-screen showcase had taken her a bit more seriously.

Batman and Harley Quinn is based on a story by Bruce Timm, who was also a guiding force on the seminal Batman: The Animated Series during the ’90s. But while Batman made his first comic book appearance in the late 1930s, Harley Quinn debuted in 1992 and was created specifically for the Animated Series. The character quickly exploded in popularity. In the subsequent 25 years, Harley has become an icon, particularly among the cosplay crowd. Batman and Harley Quinn cleverly nods at this by having Harley rummage through her closet and mention a bunch of costumes designed to make fanboys (and fangirls) pant. (“Steampunk Harley,” “Goth-Lolita Harley,” etc.)

I’ve usually described the plot of any movie or TV show I review by this point, but that sort of thing barely matters in Batman and Harley Quinn. All you need to know is that Poison Ivy (voiced by Paget Brewster) and Floronic Man (Kevin Michael Richardson) have put in motion a plan to “save” the Earth by turning people into animal/plant hybrids. Batman and Nightwing (Kevin Conroy and Loren Lester, reprising their roles from the Animated Series) decide that their best chance to get to Poison Ivy is by leaning on her friend, Harley Quinn (Big Bang Theory‘s Melissa Rauch). Harley, who claims to have gone straight, reluctantly agrees to help the Dynamic Duo. But can Batman and Nightwing trust her…or will Harley revert to her bad girl ways?

As you can see, it’s a simple set-up that leaves plenty of room for Harley to shine by getting under our superheroes’ skin. Although the title of this animated flick is Batman and Harley Quinn, it’s actually Harley and Nightwing who make the most notable, ahem, connection. Meanwhile, Batman’s stick-in-the-mud nature is amusingly played up here; the Caped Crusader can be seen guzzling a glass of milk during a pit stop at a bar. There are also some funny Easter eggs for fans of the Dark Knight’s lighter side, like a bar patron cozying up to our heroes by doing the Batusi.

Unfortunately, Harley herself doesn’t fare quite as well. The character was originally voiced (and inspired) by Arleen Sorkin, who brought some crucial wounded playfulness to the role (in addition to Harley’s nutso punchlines). Harley has more recently been voiced by the likes of Hynden Walch and Tara Strong, but this is Rauch’s first stab at the role. You can tell the actress is still trying to find the character’s voice, leaning heavily on a “tough tawking” cadence that is more off-putting and grating than charming.

Harley’s big showcase in this movie is a rocking rendition of Blondie’s “Hanging on the Telephone.” It’s an interlude that actually fits in well with this irreverent adventure. The parts that don’t fit in nearly as well are a painfully extended fart joke that is completely out of place in a Batman story, even if it’s a cartoon. And when Batman and Harley Quinn gets down to the business of saving the world, the movie’s climax is resolved by the most stunningly dumb conclusion I can recall in one of these animated adventures. Batman and Harley Quinn absolutely has some fun and appropriately naughty moments — I wouldn’t mind spending more time in the Superbabes diner Harley is working at when Nightwing catches up to her — but that ending puts an unpleasant stink on the whole thing.

Batman and Harley Quinn is presented in an aspect ratio of 1.78:1. The 1080p image is arrived at with an AVC MPEG-4 codec at an average of 13 mbps. Given how prevalent 3D/computer animation has become, I absolutely enjoy a 2D throwback from time to time. The highlights here include backgrounds that recreate the matte painting look in comic book panels, appropriately inky black levels for the Dark Knight’s costume, and one particular sequence with Harley chasing a low-life who wronged her that features a strikingly red sky. (It’s no surprise that black and red are the colors of the day in a Harley Quinn story.) But other than that, this visual presentation falls slightly flat, and not just because of a lack of third dimension. There are no blemishes to speak of in this clean presentation, but the surprisingly low bit rate translates into an unmemorable image that doesn’t totally pop.

The DTS-HD Master Audio 5.1 track, on the other hand, features plenty of “pop.” (And not just because there’s a brief homage here to the walloping sound effects used in the 1960s TV series.) The subs offer some subtle and effective heft to every punch that is landed and mini-explosion that goes off. Overall, this is an active presentation with solid separation. (Dialogue up front, background noise in the rears.) The track really gets to let loose during Harley’s performance of Blondie’s “Hanging on the Telephone.”

This “Limited-Edition Gift Set” comes with a Harley Quinn figurine. Except for the episodes featured in “From the DC Comics Vault,” all of the bonus material is presented in HD.

Sneak Peek — Batman: Gotham by Gaslight: (8:30) A solid behind-the-scenes look at the intriguing “Batman vs. Jack the Ripper” period piece. We also get some good background on DC’s Elseworlds imprint.

The Harley Effect: (21:15) A terrific history of Harley Quinn, who was conceived as a way to spice up Joker’s crew of henchmen on Batman: The Animated Series. Producers Bruce Timm and Paul Dini admit to being totally surprised (and still seem a bit flabbergasted) by Harley’s popularity. That being said, bringing in a clinical psychologist to offer a diagnosis for Harley was a bit much.

Loren Lester — In His Own Voice: (11:46) The actor, who voiced Robin and Nightwing on Batman: The Animated Series, discusses his career and being cast on the classic carton. Very cool look at the life of a voice performer.

Sneak Peek: Batman: The Dark Knight Returns Part 1: (12:36) The animated film was released in 2012, and its creators largely focus on the groundbreaking Frank Miller story it’s based on.

From the DC Comics Vault — 2 Bonus Cartoons: You get two Harley-centric episodes of Batman: The Animated Series: “Harley and Ivy” (22:23), which is a personal favorite of mine, and “Harley’s Holiday” (21:25).

We are set to get even more Harley in the next few years: DC is planning to give us a big-screen Harley and Joker romance along with (or is it instead of) the previously announced Gotham City Sirens.

While things remain chaotic in the DC Extended Universe, Batman and Harley Quinn serves as a brisk (if underwhelming) palette-cleansing adventure. Here’s hoping Rauch gets a chance to grow into the role and is given somewhat better material next time…since it’s pretty clear there will be a “next time” for Harley.