The Lion King: The Circle Of Life Edition (Blu-ray)

Posted in: Disc Reviews by Gino Sassani on August 29th, 2017 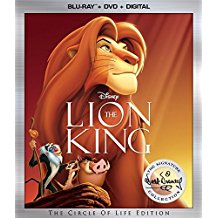 There’s a period in the 1990’s that has often been referred to as the second golden age of Disney animation. The studio had fallen from its once mighty perch, and most film historians tend to agree there was a creative dark ages through the 1980’s. But the renaissance of the studio began with Aladdin in 1992 would go on to include such tremendous classics as Beauty And The Beast and The Little Mermaid. None of these films speak to the resurgence of the animated feature like The Lion King. The film set every animated record there was and holds some of those box office records today. It can be safely stated that the great flood of animated projects that followed can be traced to the impact of The Lion King. In 1996 Simba was the most popular name chosen for new housecats. Elton John saw his appeal extend to children, and there could be no mistake that the animated feature was back.

The story is about as simple as you can get and owes some of its roots to Bambi and The Jungle Book. Simba (Broderick) was born the heir to the lion kingdom. His father Mufasa (Jones) has ruled all that the setting sun touches in peace for a generation. But his brother Scar (Irons) has never quite accepted that he was not to become king and has plotted against Mufasa and the newborn heir to the throne he considers to be his own birthright. He conspires with the enemy hyena tribe and kills Mufasa, sending Simba running into exile believing himself to blame for his father’s death. There he meets Timon (Lane) and the warthog Pumbaa (Sabella). In their carefree company he grows into a young lion.

But Scar has brought the kingdom to ruin and wasteland. Nala (Kelly) was once Simba’s friend and believes him to have died. Now she’s searching outside the kingdom for help and discovers Simba. Together they must wrest the kingdom back into its rightful hands and restore its brilliance.

The characters are at once unforgettable. James Earl Jones adds his considerable authority to the mighty Mufasa. Jeremy Irons is quite sly and evil as the brother Scar. Together these powerful voices bring, at once, a respectability and realism to the animated story. Other prominent actors provide their talents including Nathan Lane, Cheech Marin, and Robert Guillaume. These characters come alive in a way that’s rare even for the best animated features I’ve seen. There is a life here that just can’t be easily duplicated.

It doesn’t hurt that this is the best animation you will ever see. The characters are lifelike with smooth movements that animate them more than just as creatures. There’s a sense of soul here that I’ve just not encountered before. The rest of the animation is equally rich. When you see the subtle details of light diffusion and dust in the air, it’s hard to remind yourself that you’re watching moving drawings. There is an attention to detail that is uncommon to say the least. The film also takes advantage of an increased frame rate that has led to too many weaker cartoons in recent years.

Then there’s the music of Elton John, Tim Rice, and Hans Zimmer. Disney has been blessed with many great songwriters over the years. I’ve been in love with the Sherman Brothers since I was eight years old. It’s hard to beat that combination that has created so many classic standards over the years. These songs combine the organic pop nature of Elton’s style with clever storytelling in the Tim Rice lyrics. Hans Zimmer ties it all together with a score that is as rich as any put to an animated feature since Fantasia.

This is literally the perfect storm of animated features. It’s a combination I doubt we’ll see in our own lifetimes again. This Blu-ray is the best version yet of the film. It simply belongs on every video shelf. It doesn’t matter your age. This is the kind of entertainment you’ll cherish forever from 5-105. It doesn’t get any better than this.

There is one complaint. About two seconds of the film has been removed as Disney bows to some public political correctness pressure. There is a scene as Simba and his pals sleep on a cliffside where the dust hangs in the air like pixie dust. There have been claims that if you stopped on just the right frame and tilted your head just so that the dust spelled out the letters S E X. That couple of frames has been removed, and the cut is noticeable and an unnecessary flaw in the presentation.

The Lion King is presented in a slightly altered aspect ratio of 1.78:1. The 1080p image is arrived at with an AVC MPEG-4 codec at an average 30 mbps. Colors are what really stand out in this high-definition image presentation. Everything is so bright and vivid. The detail is just as amazing. This really allows you to fully appreciate the subtle texturing of dust and light that makes this such a stand out film. Black levels are excellent. This is a top-notch video presentation from top to bottom.

The DTS-HD Master Audio 7.1 allows for the dynamic music to fill your home theater like no animated feature has done before. Yes, the dialog is fine, and there are some wonderful surround things going on. But it’s the music that dominates the dynamic range of the presentation. This blows away even my old CD of the soundtrack.

This film has been released on Blu-ray twice before already.  The Audio and Video presentations are identical. This is not a remaster of the film. Most of the extras return from previous editions with a couple of new things. Are they worth buying it all over again? I’d say not really. I’ve reviewed this disc based on its own merits and not necessarily as if it should be purchased again. Here’s the new stuff you get, so decide if they are worth it. For me, as much as I love this film, the next purchase has to be a 4K UHD version.

Visualizing A Villain: (2:55) This is a bizarre music video of Be Prepared that has dancers joining a painting dance as artist David Garibaldi paints a portrait of Scar. You’ll either hate it or love it. Put me down for the first one.

The Recording Sessions: (4:46) You got some of this before. The directors give us a guided look at some of the voice acting sessions and how they informed the animated character.

Inside The Story Room: (23:42) This is a look at five storyboard presentations of scenes from the film as they were pitched during the film’s creation.

Nathan And Matthew – The Extended Lion King Conversation: (7:06) If this is the extended version the original was rather short. It’s an excerpt from the documentary Pride Of The Lion King. The two actors are talking at Sardi’s.

Boiled down to its most simple elements, traditional storytelling hasn’t changed much throughout history. From Shakespeare to Stephen King, good stories have always been about the reluctant hero and good’s triumph over evil. The Lion King is just that without any of the pretentious trappings that are intended to enhance but usually distract. It’s sad that few entertainment opportunities today offer such simple pleasure. Don’t buy this disc now because Disney threatens to throw it into a vault for 50 years. They won’t. There are several more song titles to name editions after. Me, I’m holding out for “Hakuna Matata”.

Gino Sassani is a member of the Southeastern Film Critic's Association (SEFCA). He is a film and television critic based in Tampa, Florida. He's also the Senior Editor here at Upcomingdiscs. Gino started reviewing films in the early 1990's as a segment of his local television show Focus. He's an award-winning recording artist for Omega Records. Gino is currently working on his 8th album Merchants & Mercenaries. Gino took over Upcomingdiscs Dec 1, 2008. He works out of a home theater he calls The Reel World. Favorite films: The Godfather, The Godfather Part II, The Body Snatcher (Val Lewton film with Karloff and Lugosi, not the pod people film), Unforgiven, Gladiator, The Lion King, Jaws, Son Of Frankenstein, The Good, The Bad And The Ugly, and Monsters, Inc.
Tuesday Round Up: August 29, 2017 Bull: Season One