Posted in: No Huddle by Dan Holland on September 8th, 2017 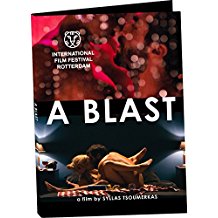 A Blast just might be one of the ‘smartest’ movies I have ever seen. Unfortunately, I am not the smartest person to watch it. Heavily soaked in allegories about Greece’s recent financial crisis, the film begs to be understood, but if you do not have any background knowledge about the crisis, you are lost from the start. The film feels it was made specifically for Greek viewers, as all of the allegorical elements feel poignant and intentional, but not knowing anything about contemporary Greek society leaves you with the feeling of “this means something; I just don’t know what it is.”

Maria lives a seemingly great life. We learn she has succeeded in grad school, keeps up with her health, has the most sensual relationship with her husband, and has raised two young children. Behind all of this, Maria’s role as a “dutiful daughter” puts her close to her family’s business and its failing finances. The story is told through flashbacks as a distraught Maria barrels down the highway, reflecting on the older good times being hijacked by the recent traumatic memories of her family crisis.

As a narrative, the film itself is very hard to follow. The timelines jump around without warning, from present to past, but there are so many different “pasts” that it is hard to pinpoint exactly where in Maria’s life we are. My assumption would be that these separate “pasts” are like memories in chronological order, but they are each introduced (or concluded? never quite clear) with a steamy, borderline pornographic sex scene between her and her husband. So if you are not ready to see two young lovers copulate as a sort of transitional piece, you are already going to feel uncomfortable. However, even if you are able to sit through the intense sexual endeavors, they distract you from their very purpose: an insight to Maria’s dreams for her and her husband. So while I can obviously tell that there are a lot of great allegories to be read about the financial crisis, it is very hard to keep up with the timelines through all of the sex.

With that said, it does have a saving grace in its cinematography. Although I was confused multiple times in the film, I was always able to enjoy just how the film looked. More often than not, the camera was able to capture very interesting moments, movements, and facial expressions of all the major characters in a way that was visually stunning. The best part about of the cinematography is its consistency; every last scene (including those of the copulative nature) are well framed and captured. This consistency of great technique persists up until the last shot of the film, which (without spoiling) would be very bland and vague without creative cinematography.

Overall, if you are a cinephile who has a decent understanding of the socioeconomic standings in contemporary Greece, this film is for you. Otherwise, I’d only watch this film for its cinematography over its narrative. Although, to be clear, I always prefer when great narrative and cinematography sing in harmony with one another. I feel that A Blast is akin to an amateur songwriter who hired your favorite singer to take the vocal leads on a new album.