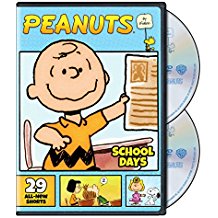 I grew up on the Peanuts creations of Charles M. Schulz. Most of us have, in some way or another. His newspaper comic strip is one of the longest running and most successful strips of all time. The work has been translated into every language currently spoken on the planet. The images of Charlie Brown, Snoopy, Linus, and the rest of the Peanuts gang have appeared on just about any kind of product imaginable. Our pop culture contains too many references to the strip to mention briefly. For me, it was the television specials starting in the mid 1960’s that brought the gang into my life. The classics are running annually, still after nearly 50 years. A Charlie Brown Christmas and It’s The Great Pumpkin, Charlie Brown are the most mentioned and certainly beloved by generations of children and adults. I thought I never missed an airing.

A couple of years ago the cartoons were resurrected in, of all places, France. A French company wrangled the rights and went directly to the actual strips for the animated shorts. The series eventually landed here in the States on Boomerang and Cartoon Network but didn’t air for more than a season. Now Warner Brothers has put together a collection of school-related portions of the series and released it on DVD. There are 29 episodes on two discs with no extras. The episodes average about seven minutes. The style remains close to the specials and cartoons that have been made here in the last 50 years. The notable difference is that colors don’t extend to the borders, and the music is decidedly different. Instead of the jazzy piano that I most associate with the franchise you get the more French-inspired mandolin and a bit of an annoying vocal chorus. Frames are often begun unfinished, and a certain item like a hat or a chair will be drawn in as we watch. Obviously, the changes reflect a more art-stylish presentation that I attribute mostly to the French origin of the cartoons.

The best and perhaps only way to truly appreciate these short presentations is to think of them more in line with the strips themselves. When you look at the cartoons as animated strips, they play just a little better. That was likely the reason for taking the material almost directly from the strips themselves. That means minimal dialog and often abrupt handling of whatever issue is being presented. For someone like me who experienced the original animated shorts as a child, these appear a bit odd. So I find myself a bit split between not getting the product I am used to and rather enjoy considerably and the satisfaction that the material continues to thrive and enjoy such an international audience. Charles Shultz is long gone, but he did live to see his creation become such a huge sensation. He was actually the first of the strip writers who learned to commercially capitalize on the success of the work. If nothing else, Peanuts manages to bring people together. And today that’s a rarity in itself. “I’ve decided I want Charlie Brown to be my Vice President.”

Gino Sassani is a member of the Southeastern Film Critic's Association (SEFCA). He is a film and television critic based in Tampa, Florida. He's also the Senior Editor here at Upcomingdiscs. Gino started reviewing films in the early 1990's as a segment of his local television show Focus. He's an award-winning recording artist for Omega Records. Gino is currently working on his 8th album Merchants & Mercenaries. Gino took over Upcomingdiscs Dec 1, 2008. He works out of a home theater he calls The Reel World. Favorite films: The Godfather, The Godfather Part II, The Body Snatcher (Val Lewton film with Karloff and Lugosi, not the pod people film), Unforgiven, Gladiator, The Lion King, Jaws, Son Of Frankenstein, The Good, The Bad And The Ugly, and Monsters, Inc.
A Blast The Originals: Season 4