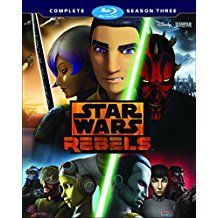 “Rebels have friends always rushing to the rescue.”

The Star Wars universe is famously vast, and that’s before even going down the Expanded Universe rabbit hole. Though it’s been precisely 40 years since the fourth first Star Wars film premiered, the army of artists who have taken on George Lucas’ iconic creations haven’t even come close to running out of material to explore. Disney XD’s Star Wars Rebels debuted three years ago as an engaging, thoroughly zippy, kid-friendly contribution that has blossomed into a thoughtful, vibrant, and vital part of Star Wars lore.

“I’m saying how we choose to fight is just as important as what we fight for.”

In case you only get your Star Wars from the big screen, here’s a quick rundown. The series takes place between the maligned prequels and the original trilogy. (Season 3 includes some especially close ties to Rogue One: A Star Wars Story — including Forest Whitaker reprising his Rogue One role as grizzled, more extremist rebel Saw Gerrera for a two-episode arc — since the film debuted while this batch of episodes was on the air.) Rebels follows the crew of the Ghost, a freighter starship conducting covert operations against the oppressive Imperial regime. Over the course of the show’s run, the Ghost crew has become a crucial part of the rebel resistance.

“This wasn’t meant to be a personal mission.”

With this being a Star Wars property, there are some inevitable references to the Skywalker clan (including a faraway Luke cameo) and other classic creations from the films. Season 3 features a recurring storyline with Darth Maul (Sam Witwer), who blinded Kanan during the show’s second season and seeks Ezra’s help in unlocking the knowledge contained within the Sith and Jedi holocrons. And while the stakes are incredibly high for our rebels — we get a very primitive look at the Death Star — the series still finds time to poke fun at the less well-received corners of the Star Wars universe. (Sabine gets a throwaway line about how she dislikes sand because it gets everywhere.)

But even though the personalities and attributes of the Ghost crew nod to established characters, Rebels has grown because it has masterfully struck the balance between serving the larger (Disney) empire and telling its own story. The series succeeds by showing the nuts and bolts of a rebellion — missions include commandeering Imperial aircrafts scheduled for destruction and infiltrating an Imperial academy to recruit cadets for the rebellion — and showcasing its rambunctious rag-tag crew. (Think Firefly.)

So while Ezra’s dark side leanings get plenty of play early on — and the season depicts the formal creation of the rebel alliance before concluding with a rousing battle against the Empire — some of the more satisfying episodes focus on the strengths and weaknesses of the Ghost crew. They include Sabine’s emotional return to Mandalore (Eps. 14-15 “Trials of the Darksaber”/“Legacy of Mandalore”), but also light-hearted installments like Ep. 13/“Warhead” (Zeb gets to prove he’s more than just brainless muscle), and even Ep. 18/“Double Agent Droid” (Chopper is compromised, and the Ghost crew notices because he starts acting politely towards them).

To be completely honest, I’ve found Rebels to be a more satisfying overall experience than the new batch of movies (so far).

Stars Wars Rebels: Complete Season Three is presented in its original aspect ratio of 1.78:1. The 1080p image is arrived at with an AVC MPEG-4 codec at an average of 27 mbps. Rebels, a 3D CGI animated series, maintain its big, bold colors, which can be seen in everything from Ezra’s piercing blue eyes to Sabine’s art. Black levels are also phenomenally deep; any scene set in outer space or showing off the star-dotted sky is a showstopper. There’s also fantastic fine detail; every scrape and fleck of damage on Kanan’s metallic eye protector and droid body is accounted for. The one place where it’s most obvious this is a top-notch TV production vs. a top-notch animated feature is in the character design. There’s a glossy sheen to the proceedings here and movements are quite as fluid whenever characters run or engage in hand-to-hand combat. But that’s only a minor quibble: I mean, did you hear the part where I said this remains a top-notch TV production?

The Dolby Digital 5.1 track here, like the two Rebels Blu-ray sets before it, denies fans the lossless DTS-HD experience audiophiles undoubtedly crave. The good news is I believe the difference between what a lossless track would offer and what we get here is largely indistinguishable, only rearing its head during quieter moments that might be presented in more subtly dynamic ways. Most importantly, this track absolutely impresses on its own merits.

There is very strong immersion and directionality throughout all channels, and the track remains quite well-balanced during the show’s frequent, chaotic action sequences. There is also tremendous directionality on display as the sound of (misfiring) Stormtroopers and all-manner of aircraft zip from one rear speaker to the next. There are also many iconic sounds — the hum of a lightsaber, blaster fire, cues to John Williams’ iconic score — that get their due here and help this show slide right into the Star Wars canon.

Return to Mandalore: (6:59) A closer look at the different aspects of Mandalorian culture, as depicted by Clone Wars, Rebels, and the creator George Lucas himself. The emphasis here is on the Mandalorian civil war during season 3 of Rebels along with the emotional stakes for fan favorite Sabine. Available on Disc 3.

Thrawn — A Legend Reborn: (6:59) Some excellent background on the Rebels season 3 Big Bad, including his origins in author Timothy Zahn’s “Heir to the Empire” trilogy. We also get to watch several animators and artists geek out over bringing the character to life. Available on Disc 3.

Apprentices to Outcasts — Kenobi and Maul: (8:47) Traces the entire arc of the Obi-Wan Kenobi/Darth Maul relationship, starting with their live-action clash in Episode I: The Phantom Menace, Maul’s return in Clone Wars, and the rivalry’s conclusion during this season of Rebels. Available on Disc 3.

The Original Rebel — Saw Gerrera Returns (Extended): (3:19) Forest Whitaker — who played Saw in Rogue One — and several key crew members discuss the character, who was one of the first rebels trained by the Jedi to fight for himself. Available on Disc 3.

Audio Commentaries: There are five commentaries — for Eps. 15, 16, 17, 19 and 20 — and they each feature executive producer Dave Filoni. Sometimes (Eps. 15 and 20) Filoni goes solo on the commentary, but he is often joined by various enthusiastic crew members. These are definitely worth a listen. Available on Discs 2-3.

A Rebel Alliance: (6:10) Since season 3 of Rebels aired before and after the release of Rogue One, I thoroughly enjoyed this featurette, which shows how the animated series ties into the big-screen blockbuster. It also helpfully points out some Rebels Easter eggs in Rogue One. Available on Disc 3.

Rebels Recon: (2:22:38) Every episode has an accompanying “Rebels Recon” segment hosted by StarWars.com social media correspondent Andi Gutierrez that takes us behind the scenes with cast and crew. These could’ve easily been throwaway bits of promotion, but there’s actually some pretty terrific insight to be gleaned from these, including links to the larger Star Wars saga. (This is also a great place to catch some nods to the original trilogy you may have missed.) Rebels cast and crew routinely drop in to share their thoughts. Available on all three discs and features a Play All option.

“I seek something much simpler yet equally elusive…hope.”