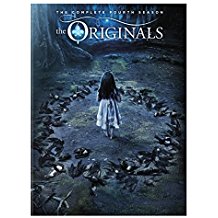 “It’s a beautiful day outside. The streets are all packed with tourists. They’re drinking beers. They’re chasing beads, headed out on the vampire walking tour of New Orleans. They think it’s just a myth, just part of the city’s charm. Well… we know better. Just like we know there’s a storm coming…”

Are you ready to do the Time Warp again? Ready or not here it comes. It’s been five years since we last left the New Orleans setting for The Originals. Klaus (Morgan) has been locked up in the catacombs by Marcel (Davis), who is once again ruling as the supernatural king of New Orleans. Hayley (Tonkin) is taking care of her growing daughter Hope by never staying in the same place twice. She’s not packing light, however, as she’s got four coffins to watch over that hold Elijah (Gillies), Kol (Buzolic), Rebekah (Holt), and Freya (Voelkel). Wait a minute, you say. Who is this Klaus of which you write? Why are their four characters in coffins? Sounds like you have a little bit of catching up to do before you can sink your teeth into this vampire drama. You really can’t just pick up with the fourth season of The Originals and have any chance of keeping up. I suggest you check out the first three season and our reviews Here before you continue along this sordid tale.

“This week marks five years since the fall of the Mikaelsons. Five years of peace, and we paid a high price for that peace. Since then we fought hard to build this community, and in the next week, as we all celebrate our independence, that community will be challenged because every year we get visitors: vampires. Vampires from all over the world. The come here and they wanna see firsthand the suffering of Klaus Mikaelson. Now some of those vampires, they’re going to be well-behaved. Others… not so much.”

All caught up and ready for Season 5? Let’s go:

While Klaus has been held captive, Hayley has been searching for the ingredients she needs to wake up the rest of the family. That last ingredient comes in the form of the last werewolf of an otherwise extinct clan. Once obtained, Freya is awakened and does the magic to awaken the others. Then it’s off to recue Klaus, and everyone lives happily ever after. Well, that’s the story, except for the happily ever after part. The fourth season is a short one compared to the previous years. It was a mid-season series this year. But it wasn’t just two episodes, so there has to be more to the story than that, yes?

That comes in the form of an ancient magic that Vincent (Gatewood) had once flirted with to stop the likes of Marcel years ago when he was killing witches. Now it has returned and is taking children from the city. When it also endangers Hope, the family finds itself back in New Orleans in an uneasy truce with both Vincent and Marcel. And so begins the new big bad of the season, something called The Hallow. It’s an ancient darkness that ends up controlling both Klaus and Marcel and attempts to get them to kill each other, as if they needed that much of a push. So episode after episode we go through spell after spell until finally a solution is discovered. The solution will require a huge family sacrifice and takes us into the show’s fifth and final season with a new problem to solve in order to get our family back together.

The Originals is coming to an end following the next season. You can see some of the loose ends already getting tied and cameos from some blasts from the past. Davina (Campbell) gets a few episodes to return and perhaps get back with Kol. She becomes the new link to The Ancestors that was severed some time back to stop another big bad. One of the most welcome return cameos is that of Camille (Pipes). I always liked the character and thought that actress Leah Pipes was one of the show’s stronger performers. Of course, she’s not really there. When we can live in mind places as so often happens on this show, it’s easy to bring back characters without needing to offer any explanation to their presence. One of the more interesting returns is Matthew Davis as Alaric. He shows up with one of those important artifacts needed for a spell. We learn that he and Carolynn have taken a page from Charles Xavier and used the Salvatore estate to open a school for gifted children. By gifted we’re talking about supernatural kids where they learn how to control their powers and apply ethics to their situations. Sounds like a potential spinoff to me.

There are a ton of good performances to be found this season. I’m always a fan of Claire Holt when she spends a few episodes in the cast. Young Summer Fontana does a really good job as the growing Hope. My favorite new character this season is Marcel’s new enforcer/hunter/lover Taylor Cole as Sofya. She gets to do a lot of things in a short amount of time. Can’t really explain that without dropping some serious spoilers, but I think you’ll find her the most interesting new character to hit the show in years. Finally, if you’ve read the previous reviews, you know how talented I think Joseph Morgan is.

There are five episodes on the first two discs. The compression artifact here is absolutely horrible. Warner did not send the Blu-ray. Hopefully it is much better. It’s a dark show that looks really bad on DVD. You also get some deleted scenes and the 2016 Comic-Con panel.

The show is absolutely winding down. This season with only 13 episodes is starting to show a lack of anything new. The season is without a doubt the most repetitive of the series. Most of the episodes are about a spell either working or not. In between we get some nice dynamic character drama, but the showrunners have decided to rely less on that aspect of the show this season. It has also gotten to the point where death is even more meaningless than usual on a genre show. Honestly, I’ve forgotten what can kill who. This season has waaaaay too many character deaths and resurrections. It really has descended into a spiral of “paranoia, violence, betrayal, repeat…”

Gino Sassani is a member of the Southeastern Film Critic's Association (SEFCA). He is a film and television critic based in Tampa, Florida. He's also the Senior Editor here at Upcomingdiscs. Gino started reviewing films in the early 1990's as a segment of his local television show Focus. He's an award-winning recording artist for Omega Records. Gino is currently working on his 8th album Merchants & Mercenaries. Gino took over Upcomingdiscs Dec 1, 2008. He works out of a home theater he calls The Reel World. Favorite films: The Godfather, The Godfather Part II, The Body Snatcher (Val Lewton film with Karloff and Lugosi, not the pod people film), Unforgiven, Gladiator, The Lion King, Jaws, Son Of Frankenstein, The Good, The Bad And The Ugly, and Monsters, Inc.
Peanuts by Schulz: School Days NCIS: The Fourteenth Season